Whose great idea was it to publish Soha Ali Khan’s memoir?

Being wealthy, good-looking and moderately famous rarely makes someone useful to the world except to provide sumptuous photography. While few of the dozens of photographs in this book fall in the sumptuous category (except for some wedding photos) they are all fun and most come with comical captions, writes Nisha Susan in The Ladies Finger. Read on:

The moment I decided I liked Soha Ali Khan’s memoir The Perils of Being Moderately Famous was when I realised she had needlessly devoted 2.5 pages to a sedate discussion of the German cartographer Mercator just to get to the point that Hindi movie stars think they are the centre of the world.

This leisurely set-up to a universal truth brings a certain relaxed hilarity to the reader too. It’s consistent with the note with which Khan begins the book. She warns that she is not going to get into what “Bhaireally meant when he talked about the difference between nepotism and eugenics then” and, two pages later, says that she wrote the book because she couldn’t think of anything else to do at the time.

In 2014, Anne Helen Peterson, then a 30-year old professor in a rural college in the US became world famous on the internet and widely envied because Buzzfeed offered her a job based on her PhD in celebrity gossip. Peterson already had a following because of Celebrity Gossip, Academic Style, the blog she maintained on her down time. Peterson, who was much-admired for her superb essays such as Jennifer Lawrence and the History of Cool Girls, has argued that no form other than the modern celebrity profile ‘seamlessly constructs the necessary components of celebrity, exploiting the desire to see our idol as both “just like us” and nothing like us… It is, in other words, spectacularly banal.’

Because the truly famous are too well-managed to tell us anything really real. Especially the stuff that celebrities write when they are keeping it real.

To Peterson, we’d like to say this week that perhaps only the moderately famous celebrity should write their own stories. We have come to this massive generalisation after reading Soha Ali Khan’s memoir.

Or perhaps, only Soha Ali Khan should write a memoir. Because what other woman, even on the peripheries of contemporary Bollywood, would get away with writing that her husband frequently “does something that makes me want to get up and punch him in the face.” This follows a sentence where she is half-admiring, half-mocking husband Kunal Khemu’s arms which are so sinewy that she can see his muscles flex when he types something into his phone.

Early on in the book, Khan writes that her father was a frugal man because he just had that one imported Jaguar two-seater. Then just as your lips are pursing sourly into ‘check your privilege, yo’, Khan says, “when he went shopping in London to replace a pair of socks he would buy just that, turning a blind eye (pardon the pun) to all other consumerist temptations.”

Pardon the pun! This lack of pressure to display filial piety feels as wickedly enjoyable a luxury as the above-mentioned car. Khan does write affectionately about her father and admiringly about her parents. But never so admiringly that you feel your last meal rising in protest, as is the case with many celebrity profiles and memoirs. Her chapter about her unlikely adventures in love, for instance, begins with her mother Sharmila Tagore telling the 17-year-old Khan as she prepares to go off to college that “just because you have sex with someone, doesn’t mean you have to marry them.” In her chapter about life at Oxford, she has an excellent bit about going to her graduation ceremony in her father’s socks.

Most chapters in this book have the easy quality of early 2000s personal blogs. And if ever Khan had a noble mission in writing this memoir, it is frequently sidelined by her desire to make a joke. Observe this footnote about Bengali daak naams. “For instance, we all know the President of India at the time of writing as the Hon’ble Pranab Mukherjee but to his family and friends he will always be Poltu!” Frequently the jokes are about herself. Like discovering as a full-fledged adult but half-baked Bengali that the Kolkata journalist who referred to her mother as Sharmila Thakur was not wrong; she was just not using the anglicised version, Tagore. 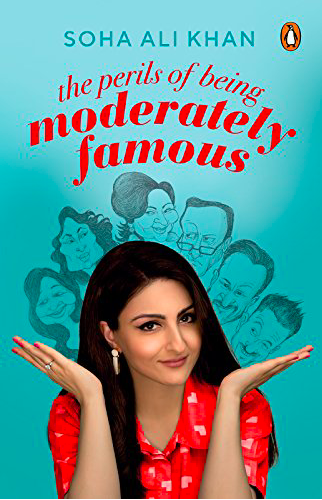 One time, a few days after being heavily trolled on Twitter, Khan says, she posted a picture of herself in a dress with green leaves and captioned it, “Leaf and Let Leaf.” She won my heart by adding, “It’s entirely possible that no one made the connection but I felt pleased with myself.”

Sometimes the jokes are throwaway anecdotes. Such as when Khan calls her maternal grandmother who is about to have an eye operation to ask her what happened. “I was watching Salaam Namaste in the theatre. The heroine’s voice was so shrill I dislocated my retina.” I giggled. (Then I googled. Stars of Salaam Namaste? Brother Saif and Preity Zinta. More giggling. Poor Preity who I love. I would read her memoir.)

Being wealthy, good-looking and moderately famous rarely makes someone useful to the world except to provide sumptuous photography. While few of the dozens of photographs in this book fall in the sumptuous category (except for some wedding photos) they are all fun and most come with comical captions. In 2009, Khan shot a song in Paris for a movie called Chemistry, which she describes as ‘such a heady cocktail of bad writing and amateur direction that true to its name, it spontaneously combusted pre-release.’ A photograph from the song of a glum Khan walking in Paris ‘dressed in bright orange overalls, broom in hand’ is captioned, “after being turned away from the Louis Vuitton store in Paris.” The caption of an innocuous photograph of Khan and her sister as children seated with their mother goes, “my dress is leftover upholstery from the sofa.”

Back in that essay, Petersen had argued that the banal and dull celebrity profile “serves a crucial industrial function: it sells the media products in which the celebrity appears; it sells the magazine that publishes the profile; but, most important, it sells the celebrity’s image and the values that image is made to represent.”

Perhaps it’s because Khan is not selling anything right now that the book has this bright, genial and extremely enjoyable quality.
Posted by Arjunpuri at 12:30