Most people don't make it to the top of the world once.

But mother-of-two Anshu Jamsenpa, aged 38, has done it five times, all from the South Col route on the Nepalese side of Mount Everest -- an incredible feat for any mountaineer.

This year, she broke a world record and made global headlines when she became the first woman to conquer the 29,028-feet-tall (8,848 meter) Himalayan giant twice in five days -- first on May 16, and then again on May 21.

Astonishingly, this wasn't her first double ascent on a single trip.

In 2011, Jamsenpa summited the tallest mountain in the world on May 12 and May 21. She subsequently made a single summit in 2013.

Jamsenpa attributes her amazing achievements to the connection climbing Everest gives her to her faith.

"I always think that I am very close to god, I am getting a blessing," Jamsenpa tells CNN of her emotional state while on the mountain. "I only feel that whenever I am at the top."

Jamsenpa was born in Dirang, a remote mountain town in the north-west Indian district of Arunachal Pradesh, which borders Bhutan and Tibet.

Small-town life had its advantages. "You're surrounded by nature," remembers Jamsenpa, referring to nearby Bomdila where she moved to as a child. Yet she also says the area was lacking in exposure to the outside world and opportunities.

The daughter of an Indo Tibetan Border Police officer father and nurse mother, Jamsenpa had three older sisters and a younger brother. She says she always knew she was different. 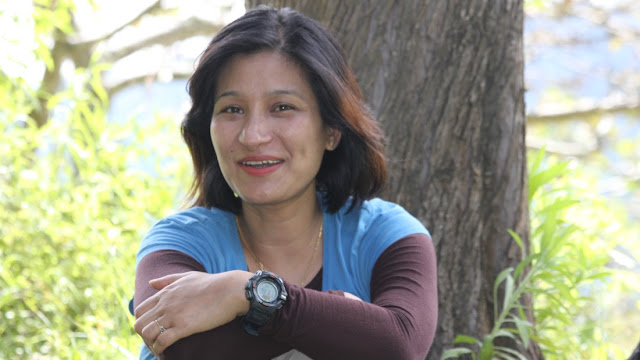 "When I was small, my family used to watch TV in one room, and I would go to another room, sit quietly, draw the curtains and listen to music. I used to think differently."

While Jamsenpa grew up dreaming of becoming a journalist, she didn't attend university.

Rather, on her 16th birthday, she met future husband Tsering Wange, and fate steered her down a different path.

The week before at his family bakery, Wange had taken a cake order, requesting the text "Happy birthday Anshu Jampsenpa" written on it. He was curious about the girl with the unusual name.

"He called up my cousin (who had placed the order), and she invited him to my birthday party. He said: 'Yes, definitely -- I will come, and bring the cake myself.' So, that's how we met."

Business savvy
It was Wange's entrepreneurial spirit that nudged Jamsenpa towards Everest.

In Bomdila, he founded a travel agency which organizes trekking expeditions in Northeast India and Bhutan, called Himalayan Holidays.

After Jamsenpa fell pregnant with their second daughter, in 2003, she began working for her husband's travel business full-time.

"When I started doing the accounting, I realized he was running the business at a loss," she says. "He was a workaholic, he just had to work -- but he never maintained the accounts."

Despite being president of the All Arunachal Pradesh Mountaineering and Adventure Sports Association, Wange had "never had the opportunity" to do any climbing himself, but Jamsenpa was hands-on.

She started taking clients on trekking and river-crossing expeditions around the Himalayas.

During one expedition, a customer suggested that she train professionally.

"He told me: 'You have the courage, and your fitness (level) is also very good -- so why don't you go for a professional course?'

"After that, I immediately I went for an advanced adventure course. Once I started, I never looked back."

Record-breaking summits
In 2009, Jamsenpa had the idea to climb Everest, and began two years of intense training, attending courses aimed at those wanting to climb the world's highest mountain.

"I did all kinds of training -- running, gym, yoga, aerobics, hiking," she says. She also scaled numerous peaks, including Nepal Peak from Sikkim in 2010.

In 2011, joining a group of nine climbers, Jamsenpa headed to Everest. She says she didn't feel nervous about the trip, because she didn't mentally have time to worry.

"Everything happened at the last moment. I didn't have much time to prepare for this expedition, because I was working on (getting) sponsorship," she says.

"I reached base camp and couldn't register in my mind that I had actually planned to climb Everest."

The biggest challenge, she says, was leaving behind her two daughters, then aged 5 and 10 years old.
I reached base camp and couldn't register in my mind that I had actually planned to climb Everest.

"(Leaving them) was the hardest part ... What I decided was this was a time, in my absence, for them to bond with their father."

Jamsenpa made her attempt from the South Col, which sits on the Nepalese side, rather than the North Ridge, which begins within Tibetan borders. "I can't climb from the north side, because we have a visa problem with China. That is why I went from Nepal side," she explains.

Both the North and South Col routes house camps at varying heights, where climbers acclimatize and refuel. On the South Col, the route that Jamsenpa has taken on all five of her ascents, Base Camp is located at 17,600 feet (5,364 meters), and there are a further five camps until climbers make their bid for the top.

Realizing a dream
It was at high altitude that Jamsenpa made perhaps the boldest decision of her life: to try a double ascent of Everest.

The idea was born when Jamsenpa -- unsure of how she was doing -- sought repeated reassurance from her Sherpa guide.

"I was used to asking: 'Do you think I would be able to summit?'"

Despite her insecurities, she was acing the climb.

So much so that at Camp Three of her first ascent, 23,500 feet (7,163 meters) above sea level, her Sherpa raised the idea of a second ascent from Everest Base Camp.

She says he told her, "OK ma'am, not only can you climb once, but you can climb twice."

"The idea clicked from there," says Jamsenpa.

Ten days after her initial summit, she was back on top of Everest. Of all five summits she's made in her lifetime, Jamsenpa says the second one in 2011 was the easiest by far.

"The weather was very good, that made the climb easy," she remembers. "I reached the top five times, but that was the best weather I got. It was so beautiful. It was so clear. It made my climb very easy. It took six hours from South Col to summit."

How did it feel to be on top of the world?

"I was totally blank (when up there) -- I didn't know how things looked," she says.

It was while descending she had a special moment.

"During my first summit, when I was coming back, the weather was bad so I wanted to descend quickly," she remembers.

"I was trekking down and suddenly saw a view of the South Col. I was shocked, because the view -- that picture -- I had seen it in my dreams."

Long way to the top
While her 2011 achievement was incredible, it didn't get her in the record books.

That honor went to Chhurim Sherpa, the Nepali climber who took the record as the first woman to climb Everest twice in 2012.

Jamsenpa claims that Chhurim Sherpa officially broke the record first due to politics: the Nepali authorities processed the paperwork of the homegrown climber before that of Jamsenpa, a foreigner.

Whatever the reason, Chhurim had made her double ascent from Everest Base Camp inside a week -- faster than Jamsenpa's 2011 achievement.

Jamsenpa says she was slowed down that year, due to the time it took to process the paperwork for her unplanned second ascent.

Determined to beat Chhurim's record, Jamsenpa returned to Everest in 2013. "My plan was to do it in less than one week," she says.

However, Jamsenpa couldn't get permission from the Nepal government that year to summit twice, so settled for one summit, becoming the only female Indian mountaineer to climb the world's highest peak three times.

In 2014, she attempted another double ascent -- but the devastating avalanche in April that year, which claimed the lives of 16 sherpas, ended the climbing season.

In 2015, the Nepal earthquake thwarted her ambition.

Scaling the mountain
That Everest is a perilously dangerous mountain to scale has not escaped Jamsenpa.

Sixty-three sherpas and 111 climbers died on Everest between 1990 and 2016, according to the Himalaya Database.

"You're putting your life at risk for (Everest) each time," she acknowledges.

For Jamsenpa, the tragedy isn't an abstract idea. She's seen it firsthand, both on her second second summit earlier this year, and in 2011, when she came across dead bodies from previous expeditions.

I felt really heavy. It took me some time to overcome that.

"During my second summit this year, I saw someone who was dying -- they were in a critical condition. I felt bad, and then I felt like crying," she remembers.

"But then I motivated myself and said: 'No, this is not going to work. If you cry ... you lose your energy. You are not going to gain anything.'"

Reluctant to leave the climber, Jamsenpa asked her Sherpa what could be done. It was too late.

"I looked back at him, and he was already dead."

"After my summit, I felt really heavy. It took me some time to overcome that," she says.

Finally, success
Before setting out on her expedition this year, Anshu met with the Dalai Lamma in Guwahati, Assam, in India, to receive a blessing from the Buddhist leader.

She describes the experience as "the most beautiful moment in my whole life."

After taking 38 days to acclimatize at Base Camp (at 17,600 ft), on April 4 she began her main journey. On May 16 she unfurled the Indian flag atop Everest.

On May 21, Jamsenpa safely achieved her dream: she broke the record for the fastest double ascent of Everest by a woman, in five days.

It hadn't been easy.

"This year, I found it more difficult, because the weather was very bad," she says. "And there were so many people there -- there was traffic."

It didn't help that during her first summit this year she had issues with her oxygen mask: "I ended up losing a lot of energy."


Her body was still feeling the effects of that record-breaking climb more than a month after her return.

"I didn't feel pain when I was up there, but I can feel the pain now -- when you get up, you can feel it. It's on my right leg, both knees and ankles."

Climbing Everest is not just physically challenging, it's a financial feat, too, with Jamsenpa paying $35,000 for each ascent in 2011. She raised the money by asking for sponsorship from the Indian government, and selling land she and Wange owned.

This year, her climb was supported by a spread of sponsors, including the State Bank of India, her profile as a climber in India helped her gain support.

Inspiring women
Jamsenpa has received accolades including Woman Achiever of the Year 2012 from the Federation of Indian Chamber of Commerce & Industry, and was in 2012 decorated with Arunachal Pradesh State Gold Medal.

But she has also faced criticism as a mother and wife for undertaking such a risky path.

"(People) used to tell me: 'Why are you wasting your money, time and energy?'" she says. "(They were) telling my husband: 'Why did you allow your wife to go? She might leave you!'"

But Jamsenpa believes there are more people who are inspired by her achievements, than who are critical of them.

"So many people come to me and say, 'You've inspired us. How do we go?' They're asking for advice, not just on mountaineering -- also in other fields. They say: 'If you can climb mountains, why can't we build things?'"

Her own family has always been supportive.

"My daughters know what I'm doing. And they're very happy and proud. I told them: 'If something happened to me, you should be happy.'"

Jamsenpa would have died fulfilled and fearless.