What bestsellers taught me about feminism

All the bestsellers have been written in our lifetime, and yet there is so much disparity in their respective portrayal of women characters, writes Yamini Pustake Bhalero in STP. Read on:

Being a bibliophile, the year 2017 began with a pledge to read as many bestsellers as my pocket and eyes would allow. But this year, I vowed to move my focus from my favourite thriller/mystery. Even if slightly. Most of the books this list cannot be called feminist books and that is precisely the reason for writing this article. What did these bestsellers, had to offer a feminist?

Kafka on the Shore and Norwegian Wood (Haruki Murakami) – Many people, take it personally when you say anything negative about Murakami’s writing, men and women alike. Much as I loved both these books by Murakami I had serious issues as a millennial woman with the way he treats his female characters. Why are women in his books a mere vessel of sexual and philosophical awakening? He surrounds his female characters with a lot of mysticism. But alas! They end up like empty casings of women that could have been.

Murakami is a great writer, an exceptionally gifted one. But as a feminist, it feels that in his quest to make these characters a mystery he has hollowed them out.

The Devotion of Suspect X (Kiego Hagashino)- Another bestseller by a Japanese author. This one is a murder mystery, where the fun is in the cat and mouse game rather than unveiling who is the killer. So what could a feminist expect to learn from such a bestselling thriller? The notion that a working woman still has to depend on a man for help and for her happiness. It is impossible to make my point without giving away spoilers. But the lead male character here is made into a pinnacle of devotion and sacrifice in this book.

What seems unpalatable is that the writer sculpts the female lead as a timid woman, who spends the entire length of the book in fear of one man or another.

Rekha- The Untold Story (Yasser Usman) : How I loved the spirit of this book, which celebrates the life of one of the most enigmatic female actors of Indian cinema. What the author gets right, is to portray Rekha as a fighter, who fought against society at every step in her life. He makes it a point to make sure that this book is much more than just a record of her scandalous love life.

It talks about her work, and her evolution both as an artist and a professional. This book is a masterclass on how to write a book about a woman who struggled to come out empowered and successful. The only thing to dislike? The book gives too many pages to her relationship with a certain superstar and the effects it had on her.

But why not end a perfectly good book, which started out as a story of an illegitimate daughter, on a point where life came full circle for her, when she was publicly accepted by her father.

Sita – Warrior of Mithila (Amish)– The story of the princess of Mithila, has seen many feminist takes on it in past few years. While feminist still cringe at the mere use of terms like “Agni pariksha” and “Van Vaas”. Author Amish gave a new take on the mythology. A take the women of 2017 so rightly deserved. Amish’s Sita is strong, intelligent and independent. She makes her own choices in life and knows how to kick some ass. We can only hope that he continues to surprise us through the remaining series.

Jaya (Devdutt Pattanaik)- When I read Pattanaik’s Sita last year, I was overwhelmed. It was the most soul-satisfying version of the epic I had ever read. It made me look at the character of Sita not as that of a helpless wronged queen. Hence, I had great expectations from Jaya.

Jaya unlike Sita, is not about Draupadi. It is a retelling of the epic of Mahabharata, where Draupadi is a pivotal character. Devdutt does full justice to her and every female character in the epic.

He attached a social commentary on mistreatment of women in modern times to every issue in the epic that revolves around women like, Satyavati, Draupadi, Gandhari and Amba.
He neither portrays them as helpless or conniving women, but gives reasons to their each and every action. And then he makes us wonder about how things have changed or failed to change. 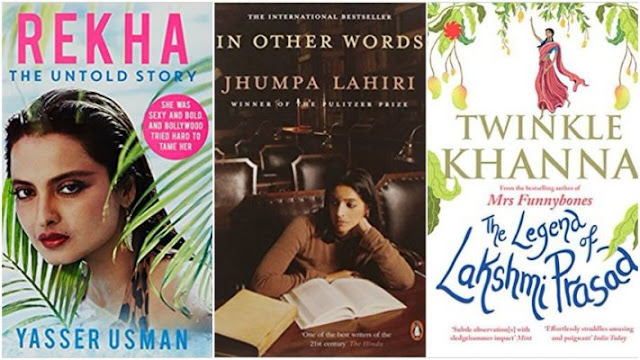 In Other Words (Jhumpa Lahiri)- Written in Italian the book talks about Lahiri’s love for the language. Her first attempt at writing something non-fiction, the work is highly autobiographical. The author is on a quest to find herself. It traces her journey to master this “other” language (Italian) she is in love with and culminates in writing this book.

Books which are about self realisation and a zeal to overcome a hardship always strike a chord with readers. In this book, her tenacity to not give up even when her goal seemed illusive inspired me.

The Legend of Lakshmi Prasad (Twinkle Khanna)- Mrs. Fuunybones, took a break from chronicling her misadventures, to write a collection of four short stories on feminism. Be it marriage, love, changing the mentality of a village, or the struggles of a man to bring dignity to menstruating women. These stories were beyond heartfelt. They were a tad to close to reality. I could associate with them, because I knew of women and men who had been in such situation.

Twinkle Khanna‘s  take on feminism is not downright revolutionary. It is like a gust of cool wind, which will rustle up your thoughts and make you feel alive!

Cat Person (Kristen Roupenian)- When was the last time a short story lead to so much discussion and left its readers so divided?

Roupenian’s short story is familiar tale. Every girl who has dated a guy like the male lead- who appear non-threatening, but still isn’t quite right for you, knows what she is talking about. Love it or hate it, this short read once again raises the debate of what exactly is a consent in a relationship.

In the year 2017, the story is not just perfectly timed, it also the discussion around relationships and feminism alive. I liked it not just because it captures the mindset of a young woman very well, but it makes us rethink our definition of a nice harmless guy.

I choose these books deliberately because each one of them made a distinct commentary on women. All these bestsellers have been written in our lifetime, and yet there is so much disparity in their respective portrayal of women characters.

I will continue reading popular books from our lifetime, and try to understand how and why popular authors write female characters in their books.
Posted by Arjunpuri at 12:30