Sasikala's family have finally chosen to show the video to the public.

Questions around J Jayalalithaa's hospitalisation and death have dominated public discourse in Tamil Nadu for a year. Though the Sasikala family have denied theories that Jayalalithaa was in coma throughout her hospitalisation, they had refused to share a video that had been captured by a family member.

Sasikala's family had claimed that they were not releasing the video out of respect to Jayalalithaa's privacy. But now, they have finally chosen to show the video to the public, apparently in light of a one man inquiry commission probing the circumstances around her hospitalisation and death.

The video shows a frail Jayalalithaa on a bed, drinking from a glass and presumably watching TV. She has a BP monitor attached to her right hand, while she’s sipping on a glass of juice in her left hand.

The video was released by MLA P Vetrivel, who belongs the TTV Dhinakaran camp.

"Both EPS and OPS were aware of how Jayalalithaa's health was in the hospital. We released this video because there are too many rumours about her condition following her death. They are constantly raising doubts about her death, we thought they will stop but there seems to be no sign. Amma and Chinamma are both important to me. This video was with me even though I hadn't gone into Apollo. OPS, EPS and Vijayabaskar are people who have discussed her treatment and yet they talk in this manner. We have even more evidence in store," Vetrivel told media persons.

"The release of the video is not connected to the RK Nagar elections in any manner. This is to prevent her image from getting further tarnished," Vetrivel added.

"This is basically evidence that Jayalalithaa was alive and was being cared for in hospital. She underwent treatment before she was unfortunately taken away due to a heart attack," Apsara Reddy, a TTV Dhinakaran supporter said. 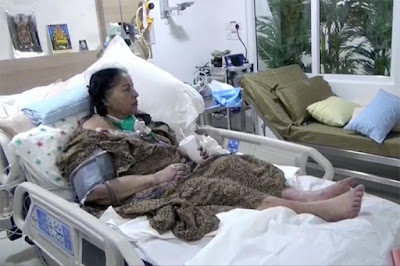 Speaking to a TV channel, Thanga Tamizhchelvan, a suppoter of TTV Dhinakaran, said, "People have been casting aspersions on the circumstances of her death for so long. We have digested this for so long. I've never seen Amma in hospital. Now I am satisfied that Amma was in hospital. How can we stand such a denigration of her death?"

C Rajasekaran, a TTV Dhinakaran supporter told a news channel, “As a common man and supporter of Jayalalithaa, I was feeling bad there was no video to substantiate the fact that she was being treated in hospital … I don’t want to attribute a motive to this video. It’s not about the RK Nagar bye-polls at all. We care about her life. This shows that all those theories that floated about how she allegedly died earlier and we were keeping quiet about it are all fake.”

The DMK meanwhile has reiterated that the questions they have raised are about whether Jayalalithaa was given proper treatment.

"Prathap Reddy himself has said that we were advised to say certain things and that they were asked not to reveal certain things. Our questions are: What happened in Poes Garden? Under what circumstances was she taken to hospital? Why was she not saved by giving the right the right treatment?" asked DMK leader KC Palanisamy.

Ever since Jayalalithaa's death on December 5, 2016, several people have raised questions over the circumstances of her hospitalisation and death. In fact, an AIADMK leader who had previously claimed that Jayalalithaa had given him sweets while she was in hospital, later turned around and claimed he had never seem her while she was hospitalised. Forests Minister Dindigul Sreenivasan said, "I seek a huge pardon from you. Please forgive me. We told lies Amma (Jayalalithaa) is eating sambar, chatni, tea etc so that you will believe that she is improving. In fact no body saw Amma eating idli or drinking tea or chatting... all are lies."

With even the Madras High Court raising questions over Jayalalithaa's death, the TN government had appointed a one man commission headed by Justice (Retd.) Arumugasamy to probe into the death.


#TTVDhinakaran supporter MLA Vetrivel releases footage of #Jayalalithaa that was taken inside Apollo hospital. Idea clearly to show she was on the path to recovery and that #Sasikala had no role to play in Jaya's death pic.twitter.com/XsLvJoG6Is
— T S Sudhir (@Iamtssudhir) December 20, 2017