Women in Indian mythology that are symbols of empowerment

Women in India are often asked to follow the example of Indian goddesses who are seen as loving and nurturing figures that remain calm and obedient and are figures of tolerance. These women, however, teach us much more than just these qualities. SheThePeople.TV tells you traits you can learn from four mythological Indian women.

Sita
We can go on and on talking about how Sita was a victim of her society and the men in her life, but what shouldn’t be ignored is that she was a strong-willed woman. She chose to go to the forest with her husband, even though she was persuaded to not go. After she was rejected by him later, without any fault of her own, she bought up her two sons independently and later chose to walk away when Ram invited her back.

Draupadi
Draupadi is one of the strongest women in Indian mythology. With limited say and power in the society that she was living in, Draupadi was fierce, strong and more intelligent that most men in Mahabharat. Stories of her courage and valour, are present throughout the epic. When she was being disrobed in the courtroom by members of her husbands’family, she used her brains to reason with all the men present there and left everyone speechless. 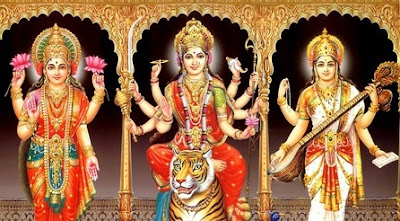 Saraswati
Considered to be the goddess of knowledge, Saraswati, epitomizes the young women we want to see in our country today. She is also the goddess of arts, music, melody, muse, language, rhetoric, eloquence, creative work and anything whose flow purifies the essence and self of a person. The festival of Vasant Panchami that is celebrated in her honour is marked by helping young children learn how to write alphabets on that day.

Kali
Celebrated widely across India as the goddess of strength and empowerment, Kali, is a breath of fresh air when it comes to Indian Goddesses. Unlike others, she is not tame and calm but aggressive and destructive. She proves that women, who have the power to create and nurture, are equally capable of destructing and annihilating the sources of evil.
Posted by Arjunpuri at 08:30