The couple who died cuddling in bed in ‘Titanic’

The 2 saddest deaths in "Titanic" somehow just got even sadder. This couple's true love story is even more romantic than the one between Jack and Rose, writes Caralynn Lippo in Little Things. Read on:

Like many natural and manmade disasters, the sinking of the RMS Titanic remains a particular fascination of many people today.

Over 1,500 of the passengers and crew aboard the massive passenger liner died when the Titanic sank in the North Atlantic Ocean, after colliding with an iceberg on April 15, 1912. The tragic event occurred during the ship’s maiden voyage from Southampton to New York City — a much-hyped journey, given that the Titanic was, at that time, the largest ship afloat.

The massive death toll made the sinking one of the deadliest maritime disasters (unrelated to wartime activity) in modern history.

The sinking was memorialized in the 1997 classic, Titanic, which broke box office records and earned a place in pop culture history. To this day, this movie is one of my own all-time favorites, and I’m sure many others can say the same!

I’ve practically memorized the entire (extremely long) film. One of the saddest moments that has always stuck with me is the death scene of two elderly passengers, a couple. But did you know that the onscreen pair was actually based on a real couple?

Scroll through to learn more about the real-life people behind this heartbreaking Titanic moment and their tragic true story.

If you’re a fan of the movie Titanic, you probably know that most of the main characters aren’t actual, historical figures.

That includes the two characters at the center of the movie’s love story, Jack Dawson and Rose DeWitt Bukater.

There’s some confusion among people; some think Jack was a real historical figure, because it turns out there was a “J. Dawson” who was a casualty in the sinking.

“J. Dawson” is buried in the Fairview Lawn Cemetery in Halifax, Nova Scotia — but he’s not the one Leonardo DiCaprio’s heartthrob, Jack, was based. The whole situation is actually just a complete coincidence.

It’s a bit of a bummer that the central love story isn’t real, but another relationship in the movie is very much based in reality: the one between the old people who died while cuddling in bed.

As you probably recall from the movie, the elderly couple holds one another in bed while their room fills up with freezing ocean water. They’ve opted to die together and go down with the ship.

It’s easily one of the film’s saddest moments, and we have the real-life Isidor and Ida Straus to thank for that. 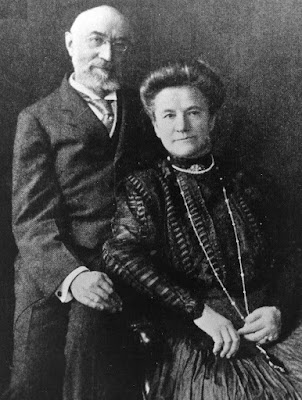 According to their Encyclopedia Titanica pages, Isidor and Ida were first-class passengers on the Titanic.

The 67-year-old businessman and his 63-year-old wife traveled with their servants, John Farthing and Ellen Bird.

sidor was famous (and extremely wealthy) for being the co-owner of Macy’s department store, along with his brother, Nathan.

He was also, at one point, a congressman for New York State.

They were among the richest people aboard the Titanic, which they’d boarded to return to New York after a winter in Europe together. 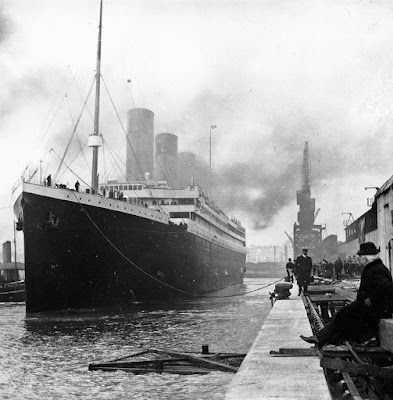 As the story goes, after the Titanic hit an iceberg, and it eventually became clear that the ship would sink, Ida (as both a first-class passenger and a woman) was immediately given a priority spot on a lifeboat.

According to a cable sent to their kids only hours after the ship went down, Ida stepped one foot into the lifeboat, thinking her husband was coming with her.

When she realized he wasn’t getting in the lifeboat with her, she stepped out.

Isidor and an officer reportedly urged Ida to get back into the lifeboat, but she refused. One account recalled overhearing Ida say, “We have lived together for many years. Where you go, I go.”

“Then, they walked to the opposite end of the ship,” Brett Gladstone, the Strauses’ great-great-grandson said. “They were last seen standing on the deck, clasping each other, calmly waiting.”

Ida’s maid, Ellen Bird, got Ida’s spot in the lifeboat. She gave a similar account of events to the family, confirming that the older woman willingly remained behind on the Titanic with her husband.

“Ida handed the fur she was wearing to her maid and said, ‘Get in the lifeboat,'” Brett recounted.

“She said, ‘You’re going to need this more than I will.’ I heard that the maid eventually gave the coat back to the family. Someone may still have it.” 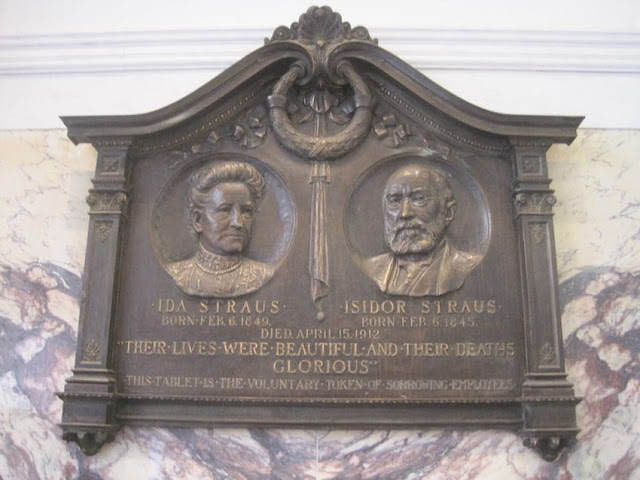 While the specific circumstances of Isidor and Ida — lying in bed while the water engulfed them, waiting to die — were invented for the movie, they did indeed both lose their lives on the Titanic.

Isidor’s body was later recovered, and he was buried at Woodlawn Cemetery in the Bronx, New York. Ida’s body was never found, but she was given a memorial on her husband’s grave.

There is also a statue dedicated to the pair in the Isidor and Ida Straus Memorial located in the Straus Park in Manhattan.

Though the Strauses died in the tragedy, their beautiful love story will never be forgotten, thanks to these memorials and the movie Titanic.
Posted by Arjunpuri at 12:30