Double-decker buses from Mysuru to Bengaluru

The Ministry has identified over 70 routes across the country to ply double-decker buses for public transport. It has also announced the double-decker bus code, according to which the carrying capacity of each bus will be up to 82 passengers.

According to specifications fixed by the government, the double-decker buses will have two service doors on the lower deck and at least two emergency exits on the upper deck as well as lower deck, apart from escape hatches.

“Many countries are encouraging plying of such buses in their public transport system, which not only provide comfortable journey to passengers, but also help reduce the number of cars on the road,” said an official in the Road Transport Ministry. 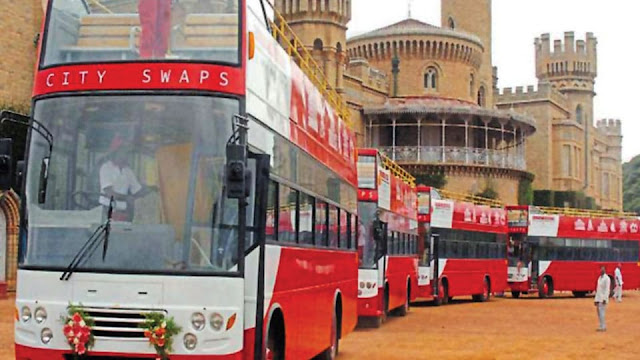 Other routes which the Ministry has identified for double-decker buses are Delhi-Jaipur, Delhi-Agra, Kozhikode-Kochi and Visakhapatnam-Bhubaneswar.

Union Road Transport Minister Nitin Gadkari had earlier said the government aimed to reduce private vehicles by encouraging double-decker buses. “We need to discourage people from buying vehicles and improve the public transport by providing a comfortable journey,” he said.

It may be recalled here that last Dasara, there was a plan to introduce double-decker buses and the Tourism Department was in talks with Karnataka State Road Transport Corporation to either offer buses to the department or operate such buses on their (KSRTC) own. The plan, however, did not take off.

Over four open-top double-decker buses were introduced in Bengaluru by the Bengaluru Metropolitan Transport Corporation (BMTC) in 2014 where the buses were used for hop-on and hop-off tours of the city, giving tourists a treat.

Open bus concept has received the thumbs up from some urban experts who point out that Kolkata has these double-decker buses, which are now one of its major attractions.