Books by women authors that defined 2017

This year saw a great variety of fiction as well as nonfiction getting published. We saw, after two decades, Arundhati Roy release a much awaited book, The Ministry of Utmost Happiness, that was praised and panned alike, and went on to make it to prestigious shortlists. After her 1997 Booker winner, The God of Small Things, this book brought back the Roy facility with words and her extensive canvas, as well as her inimitable passionate prose that one cannot just stay indifferent to. Amongst the other winners this year, was the biography on India’s Iron Lady, Indira by journalist Sagarika Ghose that didn’t wince from showing us the good, the bad and the ugly with a gaze that was meticulously detailed yet empathetic.

Another book that made waves was one based on a true life case, the famous Nanavati murder In Hot Blood, written by veteran journalist Bachi Karkaria. Poet and writer Meena Kandasamy’s When I Hit You, disturbing, exquisite and volatile, was a must read account of a dysfunctional marriage. Mythologist and ace narrator, Anuja Chandramouli amazed us all by having four books release all at once. The very witty and wry Lalita Iyer put together her very popular columns into The Whole Shebang. And there were many more.

Here’s a list of the books by women you should have read in 2017, if you haven’t yet, please do. They all come highly recommended. Surely, there are many we’ve probably missed out inadvertently, do feel free to list them out, says the team of STP. Read on:

Indira by Sagarika Ghose :  This no-holds-barred biographical portrait looks for answers to lingering issues: from why Indira revoked the Emergency to her son Sanjay’s curious grip over her; and from her bad marriage and love affairs to her dangerous religious politics.

The Whole Shebang by Lalita Iyer : For the urban woman who wants to enjoy a guilt-free life, this book will take you on a journey towards self-realisation and renewed self-confidence.

In Hot Blood by Bachi Karkaria : In this laboriously researched book – part thriller, part courtroom drama and legal history and part social portrait of post Independence Bombay – Bachi Karkaria gives a most comprehensive account of the Nanavati case and the Constitutional crisis to which it gave birth.

The Ministry of Utmost Happiness by Arundhati Roy : The Ministry of Utmost Happiness takes us on a journey of many years – the story spooling outwards from the cramped neighbourhoods of Old Delhi into the burgeoning new metropolis and beyond, to the Valley of Kashmir and the forests of Central India, where war is peace and peace is war, and where, from time to time, ‘normalcy’ is declared.

How I became a Tree by Sumana Roy : Mixing memoir, literary history, nature studies, spiritual philosophies and botanical research, How I Became a Tree is a book that will prompt readers to think of themselves and the natural world that they are an intrinsic part of, in fresh ways.

Girls are coming out of the Woods by Tishani Doshi : In this collection, Tishani Doshi inhabits the different homes: her childhood, the body, cities that were passed through, cycles of rain. There are poems of celebration and homages, as there are poems lamenting human cruelty and dispassion. 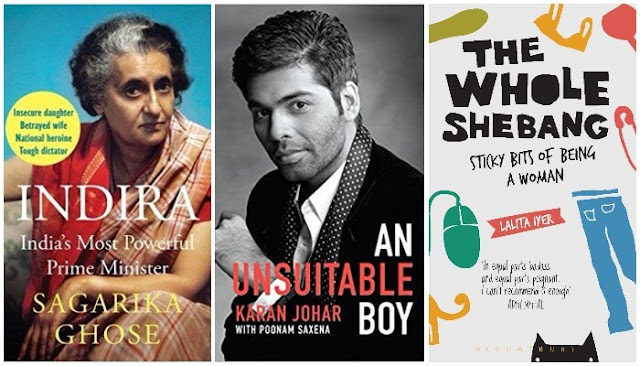 When I Hit You: Or, a Portrait of the Writer as a Young Wife by Meena Kandasamy : At once the chronicle of an abusive marriage and a celebration of the invincible power of art, When I Hit You is a smart, fierce and courageous take on traditional wedlock in modern India.

The Windfall by Diksha Basu : A sharply observed tale of social aspiration and anxiety, The Windfall is a thoroughly modern comedy of manners about family, friendship and what it means to belong in a rapidly changing India.

A Hundred Little Flames by Preeti Shenoy :  A  charming account of a relationship across generations and also a meditative look at the issues of old people, this is bestselling author Preeti Shenoy’s first foray into literary fiction.

The Girl Who Couldn’t Love by Shinie Antony : The story of an introverted, middle-aged spinster, Roo or Rudrakshi Sen, comes alive with Antony’s sparse, evocative prose.

“2” by Paro Anand: This graphic novel This slick and ground-breaking graphic novel tells the story of a young Indian boy, Ganga, and a Swedish girl, Helga, whose destinies get tied with one another in a strange and magical way.

Who Me, Poor?: How India’s Youth are Living in Urban Poverty to Make it Big by Gayatri Jayaraman: The author explores in detail the lives of the ‘urban poor‘ and the reasons for their poverty.

An Unsuitable Boy by Karan Johar co-authored by Poonam Saxena : In this book, Karan Johar looks back at his childhood, his obsession with Bollywood, foray into films, friendships with Aditya Chopra, SRK and Kajol, his love life, the AIB Roast, and much more.

A Night With A Black Spider by Ambai : A collection of short stories based around train journeys, these are compelling tales, translated from the Tamil.

Prithviraj Chauhan: The Emperor of Hearts by Anuja Chandramouli:  A compelling tale of one of the greatest warriors in our history.

Ants Among Elephants by Sujata Gidla: This unflinching account of being born an untouchable by Sujata Gidla has been acclaimed around the world.
Posted by Arjunpuri at 04:30