My latest is a book review of Rajinikanth: The Definitive Biography by Naman Ramachandran. Here's the link. 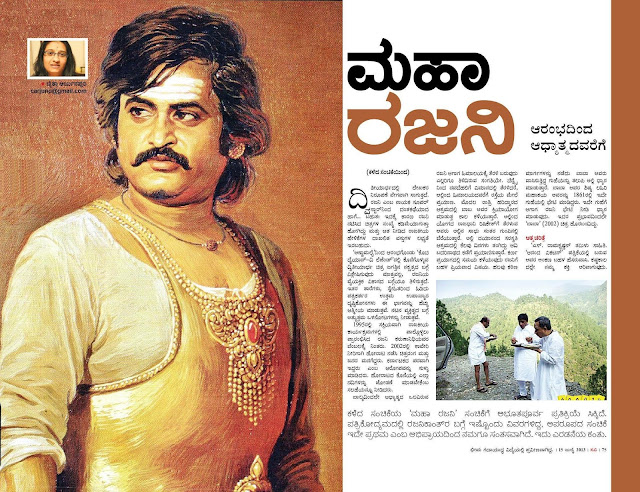 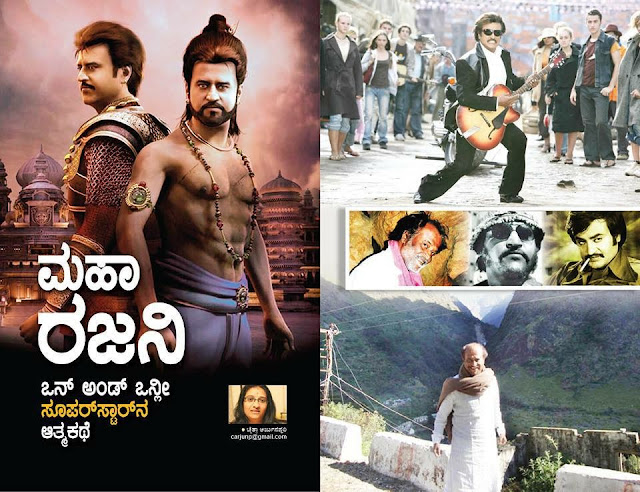 Posted by Arjunpuri at 14:19 No comments:

The world comes crumbling down when a New Yorker is forced to leave the country to settle down in the land of Karma, India. Blogger Jenny Feldon chronicles her not so-easy two-year journey in her memoir Karma Gone Bad: How I Learned to Love Mangos, Bollywood and Water Buffalo (November 5, 2013). 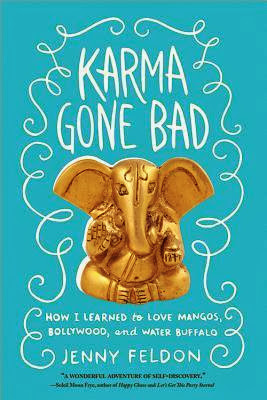 The memoir opens with the much pampered princess packing her designer dresses, shoes and sling bags, as her husband Jay is transferred to India on a two-year contract. She dreams of making friends with glamorous expats, seeing lengths and breadths of India, practicing yoga at the land of yoga. However, it doesn’t take much time for the newly married 27-year-old Jenny to realize that the country she had imagined, read and watched in movies was far from reality.

The moment she arrives in Hyderabad, which she calls ‘Bad, to emphasize her bad experiences in the capital city of southern state Andhra Pradesh, she feels stuck. She not only misses her beauty sessions in New York, but also Starbucks, latest fashion trends, friends and colleagues who supported her back home. Adding to the woes, her husband Jay falls sick within two days of their arrival and she suffers food poisoning several times, unable to manage with the “spicy” food.

She finds mistakes and flaws in everybody and everything. She feels lonely in a country which is one of the most densely populated nations in the world and feels like losing her identity, as people address her “Madam” and not Jenny. “Here, I was no one. A parasitic extension of my husband, a hanger-on in the world of corporate transplants,” she laments and blames India even for that. She fails to become “the best Indian housewife”.
She sees how life in India cannot become “a travelogue”, full of photographs and anecdotes about her exotic new life. Unable to cope with situations – in fact, Jenny’s little white Maltese, Tucker, copes better than her – she abruptly leaves her husband and India within six months. Jay, who arrives in the U.S. for Thanksgiving, discusses divorce and she sees her mistake. She returns to India, but with a change in the attitude and outlook.

She realizes what the universe had been trying to tell her all along: India didn’t need to change. Instead it is she who needs to change and promptly does it. She stops blaming India, keeps her unrealistic expectations to the side and accepts the country as it is: “With my new plan in place to embrace all (or at least some) things Indian, Bollywood didn’t seem like a bad place to start.” She enjoys the remaining days of her stay in India, making friends with people, visiting local market, cooking and eating Indian food. Her visit to Taj Mahal in Agra, her interest in learning Hindi and practicing yoga brings the circle of karma to the full. At last, she successfully finds beauty in the chaos in the land of karma.

Readers – if not all, at least in India – will hate the narrator for the first three-fourth of the book. Her never ending childish tantrums, complaints and insecurities are spread all over the first 75% of the book. One wonders why and how can she complain so much – whether it is for not getting a latte, or for “brown people” staring at her, or for people not standing in the queue like Americans, or fearing for the safety of her dog!

Though she makes an effort to enjoy her stay by embracing the Indian culture and befriending Indians in the last quarter of the book, her initial complaints are too strong to forget and remain in the back of mind. She looks dismissing the Indian culture, not because India is poor or less than any other country, but because it is not like other western countries and the people are not like Americans!

This sets an example for those who would like to know what happens if a person with preconceived notion goes to live in a foreign country. There are several references to India as a “third world”, which is quite surprising given the fact that it is one of the competing economies and has been outsourcing its talent across the world, mainly to the U.S., over the past several years.

The memoir has some instances where readers wonder at the (poor) general knowledge of the author who keeps wondering often at small things. When she wonders, “Shouldn’t there be light? Buildings? No city I’d ever seen looked so dark from the sky,” we feel like showing her the satellite image of India on Diwali night released by NASA last year.

When driver Venkat Reddy proudly tells her that he has brought a “foreign car”, Hyundai, to take them, it sounds as exaggerated as when she exclaims that the steering wheel on the right-hand side “made the car seem cartoonish” as if she were “on a ride at Disneyland”! We feel like reminding her that not just India, there are other 74 other countries, including the United Kingdom, which have the steering wheel on the right-hand side and drive on the left side of the road.

What more, she sees a buffalo on the street and confuses it with a cow! We can’t blame her for not watching National Geographic or Discovery or Animal Planet, because later at some point of time she mentions that she has seen buffaloes in zoos. She offends Indian readers when she wants the “puja” (prayer) room for her Maltese.

The woman who lived in the US by Zagat and not by Lonely Planet, suffers food poisoning time and again, she buys expired imported canned food and depends on takeaway pizzas, but dares not to cook with whatever is available; she doesn’t wash the clothes for the first six weeks because the house does not have a washing machine, she doesn’t even get a faintest idea of buying a washing machine; she can’t drink coffee because she can’t get a latte and she doesn’t think of purchasing a coffeemaker either; she worries about charcoal pressed dresses, but not think of buying a iron and press her clothes; she worries about her manicure, but never tries to do it by herself; she looks for a yoga studio, but never tries practicing at home.

Her woes never end and she fails to open her eyes even when an Australian tourist tells her to learn the language to know the place and the people, as “the words come only when you teach yourself new ways to think about them”. Instead of sympathizing with the author, Indian readers get annoyed at her tantrums.

Things become easy when she gets the real meaning of “When in Rome, do as the Romans do!” After all, her “life in India was a big burnt, mishappen cookie – delicious in spite of its imperfections”. Maybe she could have narrated more on the issues like buffaloes, mangoes, Bollywood, electricity, rainfall, traffic and others after her “enlightenment”.

As one can hate and love India at the same time, the author has done both – hated before her “enlightenment” and loved and respected after that. The narration is hilarious and honest. It gives a lesson as to what to expect in a foreign country and to learn to enjoy life’s smallest moments, be it “eating mangoes” or listening to “Bollywood songs”.

Note: Read the original review in Kannada published in Khushi, Kannada Prabha on Dec. 08, 2013, here...
Posted by Arjunpuri in Qatar at 14:51 No comments:

My latest travel piece on Bahrain published in today's Vijaya Next newspaper. 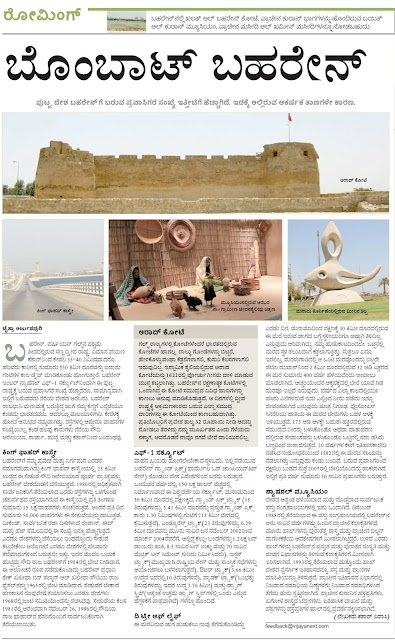 Posted by Arjunpuri at 11:38 No comments: