Advice on New Year’s Resolutions from Kierkegaard and Nietzsche

Radical freedom means we are radically responsible both for keeping and for transgressing promises. The fragility of our promises is what makes them meaningful. So go ahead: make your resolutions. You have the right to make promises. And you have the right to break them. But you don’t have to make them during an evening of late-night drunkenness. That is what the rest of your sober life is for, say John Kaag, the author of American Philosophy: A Love Story, and Skye C. Cleary, the author of Existentialism and Romantic Love, in The Paris Review. Read on:

It will soon be that time of year where many of us set ourselves up for failure. Make a resolution or don’t make a resolution; you will regret either. Or so the Danish philosopher Soren Kierkegaard might quip. One estimate suggests that almost half of Americans make New Year’s resolutions, and yet less than 10 percent successfully follow through. Maybe we forget about them long before our snow boots dry out. Maybe life takes us on a different path. Maybe we stop caring. Maybe we simply fail. It might be tempting to do away with this farce altogether, but before we commit to being noncommittal about the New Year, it’s worth thinking through some of the options.

The tradition of making New Year’s resolutions is at least four thousand years old. The ancient Babylonians celebrated their new year—the rebirth of the sun god Marduk—in spring, to coincide with barley-sowing season. Akitu was a twelve-day festival in which the king would promise to fulfill an extensive list of duties. To seal the king’s commitment, the high priest would slap him hard across the face. The slap had to be firm enough to draw tears: proof of the king’s dedication and a reminder to him to be humble. As part of the festival, other people also pledged their allegiance to the king and the gods and promised to repay their debts.

It may be tempting to overthrow this ancient tradition, to make no resolutions, and to go along with the flow of life like a carefree leaf on the surface of a happily bubbling stream. But Kierkegaard would argue that such a metaphor is deceptive: we would be akin to a stone hurled across the surface of the water, which “skips lightly for a time, but as soon as it stops skipping, instantly sinks down into the depths.” Without commitments, we risk disappearing into the existential abyss. A life that lacks purpose creates anxiety. A meaningful life, Kierkegaard suggests, is one in which we actively assert ourselves in order to live more fully. 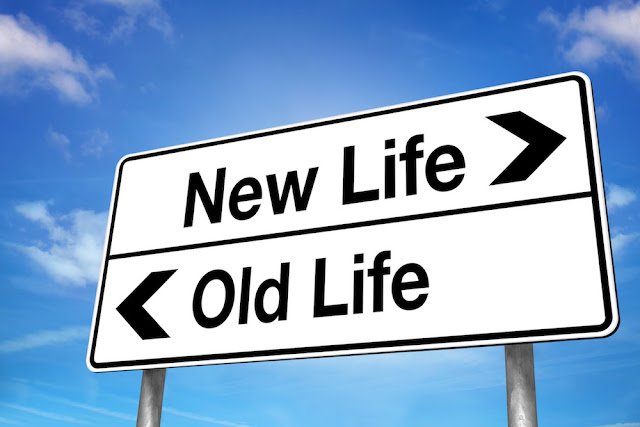 It’s all well and good to make promises, but there’s still the challenge of keeping them. Friedrich Nietzsche suggests that what differentiates humans from other creatures is that we have “the right to make promises.” Making promises addresses a fundamental aspect of our humanity: that each of us is and is not the person we will become in the future. This is confusing, so let’s get concrete: Are you the same person you will be next year? Well, not exactly. Gray hair may sprout, wrinkles may emerge, your voice may deepen and thicken, your joints begin to ache. Your physical characteristics will objectively change, even if minutely.

Your emotional and psychological identity may also shift; you might get a new job or a new partner, a new hobby or a new therapist. A promise is a way of laying claim to an uncertain future. It is a way of projecting oneself into the coming months, protecting a commitment that may be impossible to keep. It is also a means of guarding or binding one’s identity—the I in I promise. Why does a nonhuman animal not make promises? Most don’t have a conception of themselves as individuals or a vested sense of identity. Yes, some animals may experience guilt, but guilt is not the same as the shame of breaking a longstanding promise. Nietzsche’s suggestion is that we ought to keep making resolutions—heartfelt, honest-to-God promises—lest we devolve into an animal-like state.

Nietzsche does not say, however, that we must keep our resolutions. Sometimes, many times, the cost is simply too high. To fulfill all promises unconditionally may be unwise, if not pig-headed and arrogant. For example, perhaps you committed to shedding a few pounds, but it turns out that your blood sugar plummets every time you go for more than two hours without a snack and you’re constantly on the verge of passing out. So that wasn’t a great resolution after all. Or you resolved not to go on any new dates and to focus on your career, but every morning you bump into the same lovely person at your favorite café.

With new information, you just might need to leave some commitments behind. There’s no reason to feel guilty about that. The Romantic view of the self is that there’s no need to feel enslaved to an idea of ourselves that we wanted in the past. The self is forever in flux, changing, growing. The Romantic self is one that is ready to annihilate itself over and over again. As Nietzsche’s most famous protagonist Zarathustra says, “You must be ready to burn yourself in your own flame: how could you become new, if you had not first become ashes?”

For an existentialist an unwillingness to “burn yourself in your own flame,” to overcome or break a promise, can be a sign of “bad faith.” “Bad faith” is a situation in which you disavow the immediate free will that is always at your disposal. Bad faith is “bad” because it denies the hard, metaphysical core of being human—radical freedom. Radical freedom means we are radically responsible both for keeping and for transgressing promises. The fragility of our promises is what makes them meaningful.

So go ahead: make your resolutions. You have the right to make promises. And you have the right to break them. But you don’t have to make them during an evening of late-night drunkenness. That is what the rest of your sober life is for.
Posted by Arjunpuri at 14:00