Have you ever sat around the table on Christmas Day, worn a limp paper crown, stared at your sprouts and thought, "Hey, I wonder what a family with vastly superior riches and birthright-determined privilege is doing right now?"

Darren McGrady, former chef to Queen Elizabeth II, Diana Princess of Wales and Princes William and Harry, has shared exactly how Britain's first family spend their Christmas in an interview with Good Housekeeping.

Here are the eight things we learned from him – although whether or not they watch the Doctor Who Christmas special is still to be disclosed.

1. Liz hosts.
As you might expect as the matriarch of the family, it's all 'round the Queen's for Christmas.

She goes up to Sandringham House - her country estate in Norfolk - on either 19 or 20 December, with the rest of the family joining around lunchtime on Christmas Eve.

We're willing to bet the rest of the family don't have to bring a spare chair so they can all fit around the table...

2. Fröhliche Weihnachten !
As you may or may not know, the House of Windsor are of German descent, so they weave in a few traditions from Deutschland to help make their Christmas extra festive.

This includes laying their gifts out on trestle tables and opening them on Christmas Eve while enjoying a spot of afternoon tea.

Amazing how the other half lives, isn't it?

3. Take one to church.
After a "hardy breakfast", Darren says, and before they can tuck into that first box of Quality Street, the Royal Family are whisked off to church at the St Mary Magdalene in Sandringham.

We suppose with the Queen serving as the Church of England's Supreme Governor, there's somewhat of an obligation.

The St Mary Magdalene was first-visited by the Queen's great-great-grandmother Queen Victoria and dates back to the 16th century.

4. Grub's up.
After church is when the day really kicks into gear.

The family sit down and enjoy a big lunch that includes a salad with shrimp or lobster, followed by a roasted turkey and all of the traditional side dishes like parsnips, carrots and Brussels sprouts. Then for dessert, it's a Christmas pudding with brandy butter.

Apparently, they stick with the same meal every year, so says Darren.

However, it's unknown if Prince Philip is allowed to tell jokes around the dinner table or not.

As she's done since 1952, the Queen will be working over Christmas addressing the nation with the Royal Christmas Message, which is recorded in the run-up to Christmas Day.

Last year, she used the opportunity to pay tribute to the 60th anniversary of the Duke of Edinburgh Awards.

Meanwhile, on the other channel for last year's alternative Christmas message, Brendan Cox honoured his murdered wife the MP Jo Cox, while calling for unity in the face of "fascism, xenophobia and extremism".

Anyway, every year after lunch they all watch the Queen's speech. And after that, they all go their own way before coming together again for afternoon tea and a traditional Christmas fruitcake. 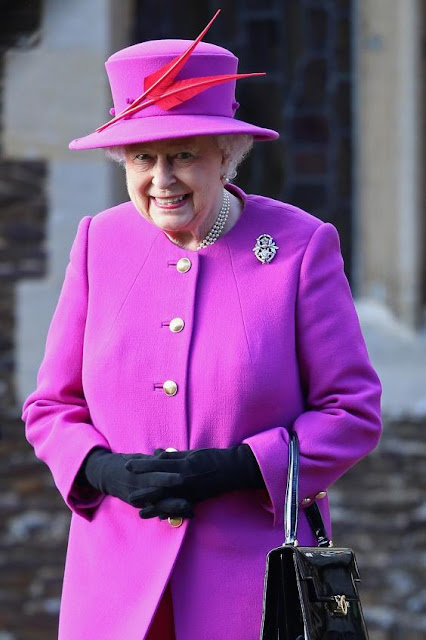 6. Royalin' around the Christmas tree.
When it comes to the décor, it's been said that the Queen is not particularly lavish, and it's all kept to a minimum.

The Sandringham residence, Darren says, is modestly festive with a large Christmas tree and a large silver artificial tree in the dining room, which is about 30 years old.

Sounds like the Windsors are a lot like us, still using the same decorations stuffed at the back of the loft year after year.

The official website for the Royal Family says they put the finishing touches on the trees together.

Time for a fun Christmas tree fact now: Queen Charlotte, consort of George III, is thought to have introduced the concept of Christmas trees to the royal family. And it was Queen Victoria and Prince Albert's enthusiasm for them which helped spread their popularity throughout the country.

Just so long as they make sure to keep the Corgis from running near it.

7. Buffet the Hunger Slayer.
While most of us will be having sandwiches stuff with leftovers, the Windsors opt for a buffet dinner with around 15-20 items awaiting them.

Right before the buffet, however, the senior chef on duty goes into the dining room and carves the roast, turkey or ham, and once he's done the Queen gives the chef a glass of whiskey and they toast.

Darren says it's the only time during the Christmas festivities that the chef goes into the dining room.

The Queen allegedly sees it as a way to "serve those who usually serve her".

We guess it's her equivalent of volunteering to do the washing up afterwards.

8. Chocoholic!
Of course, despite all the idiosyncrasies between royal Christmases and those of our own, at the end of the day, the Queen is only human – and even she enjoys her indulgences.

According to Darren, the queen is a major chocoholic – particularly dark chocolate and mint – and always has a chocolate treat on Christmas.

We're willing to bet she only has Snickers and the odd Bounty left at the end of the variety tin, too.