Miss USA sorry for offending contestants over lack of English

An Instagram post by a beauty queen questioning the English language skills of fellow contestants has caused a stir across social media.

The incident took place in the run-up to this year's Miss Universe competition which is being held in Bangkok, Thailand, on Monday.

Miss USA, Sarah Rose Summers, was quick to apologise after realising her comments may have come across as offensive, although her original live video post had been liked more than 46,000 times.
Ms Summers had said contestant H'Hen Nie, Miss Vietnam, is "so cute and she pretends to know so much English and then you ask her a question after having a whole conversation with her and she (nods and smiles)."

She added: "Miss Cambodia is here and doesn't speak any English, and not a single other person speaks her language.

"Can you imagine? Francesca (Miss Australia) said that would be so isolating and I said yes and just confusing all the time," Summers said. "Poor Cambodia."

In her apology, which received more than 24,000 likes, Ms Summers said she would "never intend to hurt another."

The three beauty contestants from Cambodia, USA and Vietnam have since had a discussion about what was said on Instagram.

Miss Summers added that it was also important to remember that the Miss Universe contest was an opportunity for women around the world to learn about other cultures and life experiences.

Reaction was swift across social media.

One Instagram user, debrasamuelbrown, added her comment to the original video: "Americans have issues with any non-American English speaking person. It's weird how they expect everybody to speak like a yankee! What a wonderful world we live in with so many beautiful accents and so much flavour!"

She put this down to the fact that Cambodia was still a developing country, and offered to teach her English "for free".

Over in the Cambodian capital, Phnom Penh, Liya Rika called for more compassion, saying she didn't think Miss USA meant to look down on Miss Cambodia, and that people should forgive her:

One user, tinetoy18, did not regard Ms Summers as fit for the Miss USA title: "You deserved to be forgiven but you do not deserve the crown anymore...You're not a good example of a compassionate woman as you claimed."

However, other comments praised her for owning up to her mistake and apologising, including 'Team Elite Indonesia'. 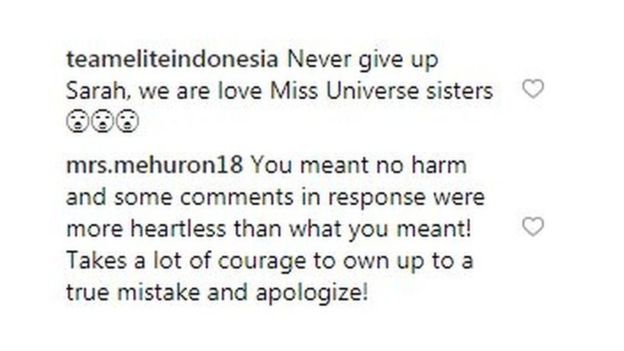