Are teachers' Christmas gifts getting out of control?

There is no shortage of ideas online for what to get schoolteachers at Christmas.

Personalised bracelets, spa vouchers, bottles of scotch and, of course, plenty of chocolate.

But in a bid to stem the tide of festive generosity and relieve pressure on families one school in Wales has asked parents not to buy Christmas presents for their children's teachers.

They are not the only ones to express concern. 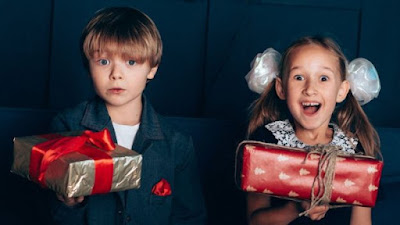 Earlier this month, one independent school in Oxfordshire even felt compelled to introduce a £50 cap on presents to teachers.

Meanwhile in Scotland, parents group Connect, teaching union EIS and the Child Poverty Action Group teamed up to reinforce the message that a simple "thank you" was enough.

Vouchers, personalised gifts and hampers
So how much pressure does this gift-giving put on parents at Christmas?

One Mumsnet user lamented the competitive nature of the whole business.

"I have heard people saying they have got wine, vouchers, personalised gifts, even a hamper," said one parent on Mumsnet.

"All seems very competitive to me. We are skint at the moment with the lead up to Christmas and I thought I was done with the present buying."

Some parents choose to organise a class collection, however this too can cause problems.

Natalie Brown, author of parenting blog Confessions of a Crummy Mummy, says she was shocked on being asked to donate £10 to a collection for the teacher.

"There are 30 children in the class, so if everyone were to contribute £10 on behalf of their child that's £300. I just think that's excessive."

"You can feel a bit of a Scrooge if you don't want to do that. There shouldn't be any expectation," she says.

Instead, her daughter plans to make some fudge and a card for her teacher.

It is not just parents who feel the pressure.

One teacher told the BBC: "Although it's very kind of parents it also puts a burden on us teachers to give each child one [present] in return."

'Parents try to outdo each other'
Teacher and blogger John Dabell recalls being given a restaurant voucher for £50 - a gift he felt he had to decline.

He says it shouldn't come as a surprise that some schools and teachers are asking parents not to give gifts.

"Buying a present for their teacher is a big thing for many children but this puts some families under a lot of pressure.

"Unfortunately, many schools don't poverty-proof and so unhealthy and competitive present giving can happen."

School support worker Ian agrees saying "Parents try to outdo each other and some teachers have so much it won't fit in their cars."

"I've always thought presents, if given, should be pooled and distributed to everyone or local people in need," he adds.

The gift of giving...
In that spirit, some schools are seeking charitable donations in place of presents.

Diana from Belfast told the BBC that her local school started asking for donations to a local charity instead of presents for the staff.

"We raised a lot of money for a really worthy cause last time, which was brilliant," she says.

One teacher in Staffordshire told the BBC her school encouraged parents and pupils to donate to the charity Save the Children instead.

"We discussed with our pupils what children in poor countries have, compared to most of us," she says.

Kate McLaughlan, a teacher in Port Glasgow wrote to parents asking that, instead of a gift they donated to the local food bank.


However attempts by schools to encourage charitable donations over gifts don't always work according to one parent from County Londonderry.

She said that parents still brought in presents despite the school's efforts.

"As a family on benefits I stuck to the request for donations to charity and put a small donation in a card," she says.

"But seeing others take gifts in made me feel I was being seen as less appreciative of the teacher's hard work, which certainly wasn't the case.

"My daughter came home a couple of times saying so-and-so got the teacher a present and why couldn't she get them a present."

Cards are 'irreplaceable'
Perhaps parents are spending too much time worrying about what gift to give.

For retired teacher Nicola Brown, it is the cards not the presents that have the greatest value.


"Gifts have long gone but I have kept some of the cards (in an album)," she says.

"Irreplaceable - such sweet words. Worth more than any gift."