After Narayanan Nambiar and Sarada were split in 1946, their children from second marriages decided to set up a meeting for the two.

90-year-old EK Narayanan Nambiar finally met his 85-year-old wife Sarada recently, after 72 years of being separated from each other. When they met, bystanders say, Sarada went shy and quiet, much like the 13-year-old she had been when she parted ways from then 18-year-old Narayanan. As first reported exclusively by Mathrubhumi reporter CK Vijayan, Narayanan Nambiar and Sarada hadn't even spent one year together after their marriage in 1946 before fate and politics pulled them apart, following which they moved on to remarry and have their own families.

It was a meeting between their relatives that allowed their paths to cross once again. Like the greatest love stories, Narayanan Nambiar and Sarada’s story is suffused with drama, sorrow, heartbreak, and anti-feudal, anti-colonial politics.

An eight-month love story
Narayanan Nambiar and Sarada’s love story began and ended in 1946. The two had been married to each other for eight months when, in December 1946, “our story's hero” (as Narayanan Nambiar’s nephew Madhukar tells TNM), Narayanan Nambiar and his father Thaliyan Raman Nambiar decided to take part in the Kavumbai Farmers Rebellion, a farmer’s uprising to gain control over their own land and wrest it from the feudal leaders. In Kavumbai, the planned uprising was against the feudalist Karakattidam Nayanar, who controlled many parts of Kannur. 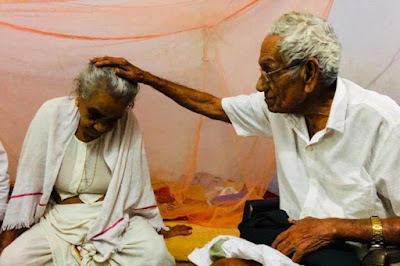 On the evening of December 30, 1946, Narayanan Nambiar, Thaliyan Raman Nambiar and 500 other volunteers marched to a hill near the house of Karakattidam Nayanar with weapons, planning to attack the house early the next morning.

However, members of the Malabar Special Police (MSP), tasked by British colonial rulers to protect the interests of Kerala’s feudalist rulers, caught wind of their plan and surrounded the hill that same night, firing at the group with machine guns. Five protesters were killed by machine gun fire, while EK Narayanan Nambiar and his father went underground. They were later arrested by police, after which they were imprisoned in Kannur and Salem jail. Although Narayanan Nambiar suffered 16 bullet wounds in the firing, he managed to survive, but continues to carry one single bullet inside him. His father Thaliyan Raman Nambiar, however, was shot dead in jail on suspicion of being involved in violent protests.

Meanwhile, on December 31, 1946, 60 members of the MSP had arrived at the home of Narayanan’s wife Sarada and his mother. They broke into the house, destroying their rations of ghee, milk, pepper and rice, and attacked his mother, as they suspected that Thaliyan Raman and Narayanan Nambiar had returned home. They returned soon after, and burned their house down.

With no signs or hopes of Narayanan’s return, and after a few more violent visits from the MSP, Sarada’s mother-in-law decided to send her back to her natal home, where she was soon remarried.

Eight years later, in 1954, Narayanan was released from jail in Salem and left for his home, only to find out that his wife had been remarried. Narayanan Nambiar, too, remarried and had seven children.

When Bhargavan, Sarada’s son, happened to meet Santha and Madhukumar, they decided to speak to their respective family members and set up a meeting between the two. They met at Bhargavan’s house in Parassinikkadavu in Kannur district.

Sarada’s family prepared a traditional Kerala meal of kappa (tapioca), kanji (rice gruel) and puzhukku (a root vegetable dish) to welcome Narayanan Nambiar, who came with his sister-in-law and her children.

In videos of their meeting, Narayanan Nambiar can be seen patting her head, while Sarada’s eyes were trained on the floor. At other times, when Narayanan Nambiar speaks to others present in the house about the events that cast them apart, Sarada can be seen stealing a few glances at him before looking away.

They discussed how neither of them was angry at anyone for the events in their life. As her children brought up memories of their mother, Sarada said that she never had to work and was treated like a daughter by Narayanan Nambiar’s family.

Before he was set to leave, again, Narayanan Nambiar laid his hand on her head and told her “I am leaving now”, while Sarada simply nodded and looked to the ground.