Satire and the Malayali: Why India’s best cartoonists almost always come from Kerala

Political cartooning and Kerala have been a perfect match since the first cartoon was published in the state in 1919.

A fearsome god-like figure in the middle of the frame appears to be presiding over a scene of death, starvation and torture. Impaled on a spear held in his left hand is a human kill. A terrified creature in his right fist is struggling to escape a similar fate. The only one seemingly unaffected by the grisly goings-on is a smaller figure of authority, clad in western attire – boots, trousers, cape and cap – standing with his hands raised in benediction or approval.

This is a scene from Mahakshamadevatha, or the God of Famine, likely the first-ever cartoon published in Kerala. It appeared in a humour monthly, Vidooshakan (Jester), published from Kollam in October 1919. The work was unsigned. 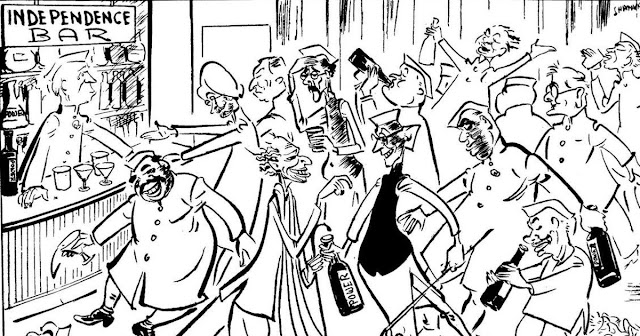 Bonny Thomas, author and former cartoonist at the Economic Times, stumbled across Mahakshamadevatha in the archives of the State Central Library in Thiruvananthapuram in 1989. Thomas, who was trying to document the rise of cartooning in Kerala at the time, says the work was a powerful statement against war and colonialism. “It was the end of World War I, many parts of Kerala were facing famine because of rice shortages,” he said. “The Travancore king had introduced tapioca cultivation to keep off a crisis – you can see the plant in the margins. The Englishman, likely a policeman or an army man and a representative of colonial powers, is blessing the durdevatha or malevolent god, and the destruction he was causing.”

Mahakshamadevatha was clearly inspired by Punch, the storied British humour and satire magazine. But over the next ten decades, cartooning became as much a part of Kerala as the tapioca that had arrived from Brazil. The state not only produced cartoonists who were star draws in Malayalam newspapers and magazines, but also sent out legends to national and international publications. One such dearly loved export, PKS Kutty, even worked in the Bengali Anandabazar Patrika.

“Almost every newspaper in Kerala has a front-page cartoon and sometimes inside as well,” said seasoned Indian Express cartoonist EP Unny in an article celebrating Kerala’s cartooning centenary in Bhashaposhini, a Malayalam literary journal published by Malayala Manorama. “Even in Europe you will not find the art this prolifically visible every single day. Three crore people, 100% literacy, three in five a newspaper reader, three out of four a voter. And cartoons everywhere.”

Kerala was by no means the first state to take to cartooning. Punch and its sharp caricaturing of British colonialism in India had already inspired the birth of Oudh Punch in 1877 and Parsee Punch in 1854, which served rapier-sharp political wit in Urdu and Parsi Gujarati, respectively. In neighbouring Tamil Nadu, Subramania Bharati, poet, journalist and activist, had introduced cartoons in Indian, the fiercely political journal he started editing in 1906.

But it was in Kerala that cartooning found its natural home.

Politics and cartooning
The Malayali propensity for satire is ancient and deep-rooted, going as far back as 1500 years. Chakyarkoothu, a jester’s act grounded in the Sanskrit theatre tradition of Koodiyattam, allowed every actor in costume the unfettered freedom to knock down kings, priests and the nobility. In 18th century Kerala, the narrative art of Ottanthullal – a delightful jumble of poetry, dance and music – was scripted by one of the greatest satirists of Malayalam literature, poet Kunjan Nambiar.

Even today, satire saturates the media and entertainment scene. There is the popular “mimics parade”, travelling troupes that specialise in imitating and parodying politicians and celebrities. The nightly political spoofs on practically every news channel show how deeply wired black humour is in the Malayali mindset. The average man or woman on the street has always been argumentative, contrarian and highly political – a god-sent audience for cartooning.

But going back to its growing years, Unny attributes cartooning’s dazzling rise in Kerala to two of its greatest social reformers of the early 20th century – Sree Narayana Guru and Ayyan Kali – who tore down the state’s repressive caste practices. “They gave the common man and the lower castes, who couldn’t even use words like salt in public, the courage to join public conversations,” said Unny. “The teashop became the site of verbal humour, a lot of it political, and that translated easily into the visual humour of cartoons. That is where cartooning in Kerala acquired its intensity.”

Social and cultural historian AR Venkatachalapathy, who has researched the history of cartooning in Tamil Nadu, believes the politically-charged air of Kerala gave its cartooning an edge. 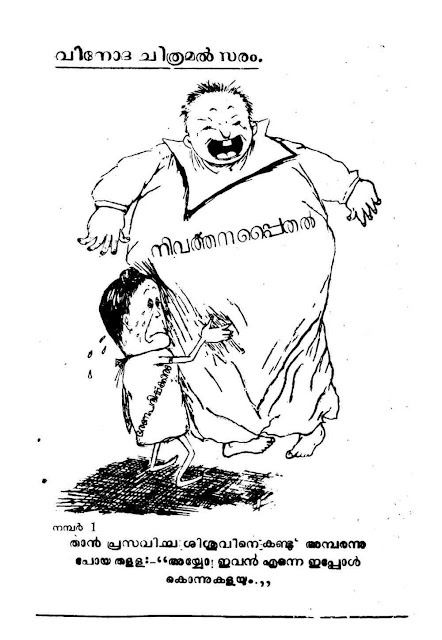 “Cartooning requires audacity,” said Venkatachalapathy in an interview to Sahapedia. “You need to have a political vision. The political vision of Tamil cartoonists has never gone beyond accepted middle-class norms…I think Kerala has succeeded because of the strong Left tradition, which gives a theoretical arsenal to criticise. You should have a political vocabulary to criticise, which has been provided by Marxism which essentially a very anti-status quoist ideology.”

Another factor behind cartooning’s rise was the mercurial, binary and combustive nature of politics in Kerala. In the seven years of its democratic existence, the erstwhile Travancore-Cochin state had five chief ministers. After just three years of Left rule, led by EMS Namboodiripad, in the late 1950s, the state of Kerala has largely been led by complex, rocky coalitions helmed either by a fissiparous Congress or the Left. This has guaranteed Malayali cartoonists a perennial wellspring of daily inspiration – factionalism, party hopping, double dealing and scandals that never end. “Neither Kerala’s politicians nor its cartoonists have had any rest since the birth of the state,” quipped Unny in Bhashaposhini. 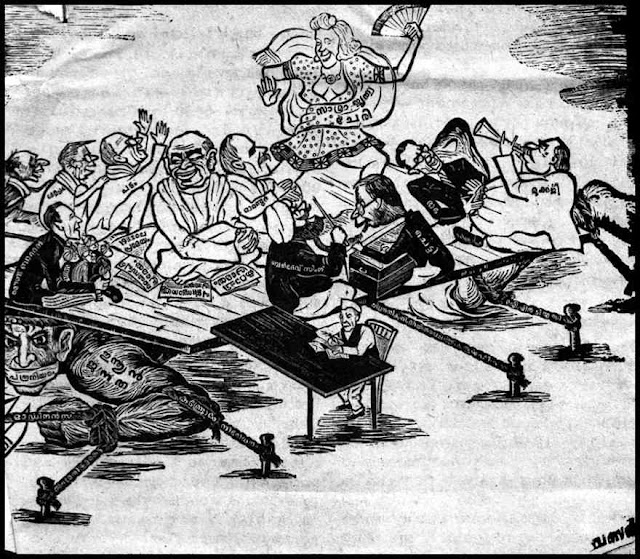 Early pioneers
Many visionary cartoonists and events, some planned and others purely serendipitous, propelled the unique history of cartooning in Kerala. The 1930s and ’40s saw an explosion of humour magazines in Kerala, such as Sarasan, Vikadakesari, Narmada and Naradan. Between 1935 and 1942, literary critic, lecturer and humourist MR Nair, known by his pen name Sanjayan, started editing two satire weeklies in Kozhikode: Sanjayan and Viswaroopam. These journals, with high standards of writing, nurtured great talents such as PKS Kutty and M Bhaskaran. They also raised “cartoon awareness and readership in Kerala,” Unny said in his chronicling of the state’s cartooning history in Seminar magazine. Sanjayan’s impact was such that “the laid-back port town of Kozhikode in the late 1930s came to acquire subscribers for the Punch magazine in unlikely numbers,” wrote Unny.

Around the same time, another strand of Kerala’s cartooning history was unfurling in Delhi. At the centre of it was a gifted artist from Kayamkulam – Shankar Pillai, the man who was famously commanded by cartoon connoisseur Nehru with the words “Don’t spare me Shankar.” And who went on to obey Nehru by lampooning him in 4,000 cartoons.

Shankar was hired as the first editorial cartoonist of an English newspaper (Hindustan Times) in 1932 by editor Pothen Joseph and remained there till 1947, documenting the nation’s march to freedom and political self-determination. 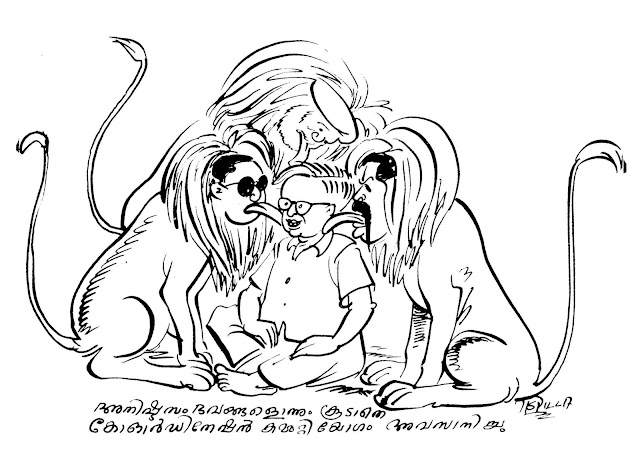 Shankar occupies a huge space in the story of cartooning in Kerala. Not only was he prodigiously talented but he also generously mentored some of the most brilliant talents from the state: OV Vijayan, Abu Abraham, Kutty, T Samuel, Kerala Varma, BM Gafoor and Yesudasan.

At Shankar’s Weekly, which Shankar launched after he quit Hindustan Times, these men got a place to sharpen their skills and polish their styles. Nobody was required there to become Shankar’s clone, says Unny. There was, for instance, Vijayan with his searing honesty, bleak humour and brutal style which, far from giving anyone a good morning laugh, could send them into depression. “It was Vijayan who brought to an end the age of genial cartooning and made savagery his baseline,” said Pritish Nandy in a review of the memoirs of the cartoonist-novelist who contributed to the Far Eastern Economic Review, among other publications. Abu Abraham, who drew for Observer and The Guardian in a London stint, was known for his clean lines and withering wit.

Something for everyone
While political cartooning remains the mainstay in Malayalam cartooning, the one wildly popular series, adored by children and adults alike, was Bobanum Moliyum (Bob and Molly) that began in 1962. It mapped the little world of two impish children, a small dog at their feet and their adventures in a quintessential Kerala village. It had some staple characters – a mofussil politician, a hippie (named Appi), a harassed mother, a lawyer father – and a gentle humour that landed spot-on nevertheless. Almost every Malayali has a favourite Bobanum Moliyum episode.

Created by cartoonist VT Thomas (better known as Toms) for the Malayala Manorama, it appeared every week on the last page of the magazine, and for devoted fans the last page was always the first page they turned to when the magazine arrived. The children’s antics were of course the heart of the story but alongside, there was a lot of gentle social and political satire in a world where rallies, slogans and village conspiracies were commonplace. 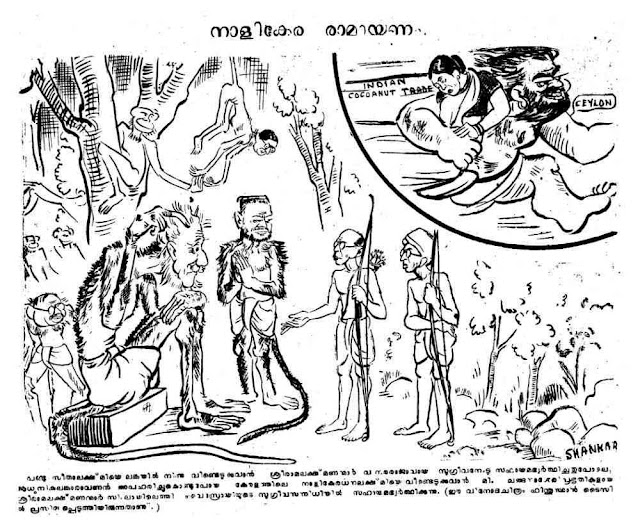 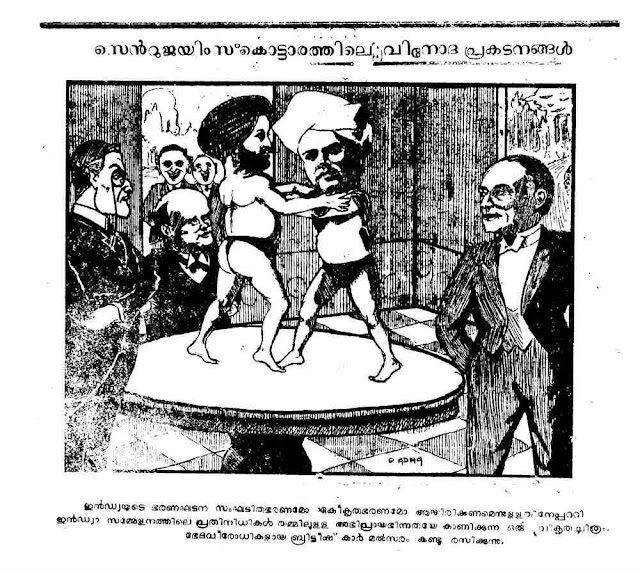 Around the same time, G Aravindan, who was later to become a filmmaker, was pulling in readers into the world of Ramu, a common man observing the world around him, in his cartoon series Cheriya Manushyarum Valiya Lokavum, which appeared in Mathrubhumi from 1961 to 1973.

The only hole, and a large gaping one, is that this wonderful world of lines has been dominated entirely by men. And the male gaze. The jokes are often sexist and that is no longer funny. “When I go to talk to young school children on cartooning, the girls ask me: do women really look or behave like that? We need to find an answer to that,” said Unny.