Indonesia tsunami: New warning system 'to be built next year'

Indonesia says it will build a new warning system capable of detecting tsunamis caused by undersea landslides, days after giant waves triggered by a volcano killed at least 429 people.

Installation of the new structure of buoys would start next year, a government agency told the BBC.

It is thought that activity by the Anak Krakatau volcano set off undersea landslides, causing Saturday's tsunami.

Officials say some 150 people are still missing and 16,000 have been displaced.

Rescue workers, helped by heavy lifting equipment, are going from village to village, sifting through the debris looking for survivors in badly hit areas on the islands of Sumatra and Java.

How will the new system work?
The new mechanism would work by detecting the size of waves, Iyan Turyana, a spokesman for the Agency for the Assessment and Application of Technology, told the BBC's Indonesian service.

The existing technology failed to predict the tsunami that devastated coastal towns around the Sunda Strait, between the islands of Sumatra and Java.

The system has been set up to monitor earthquakes, but not undersea landslides and volcanic eruptions, which can also generate deadly waves.

Due to lack of funds, vandalism to the buoys and technical faults, there have been no operational tsunami warning buoys since 2012.

But experts say that even if there had been buoys near the volcano, there warning time would have been minimal, given how close Anak Krakatau is to the shoreline. 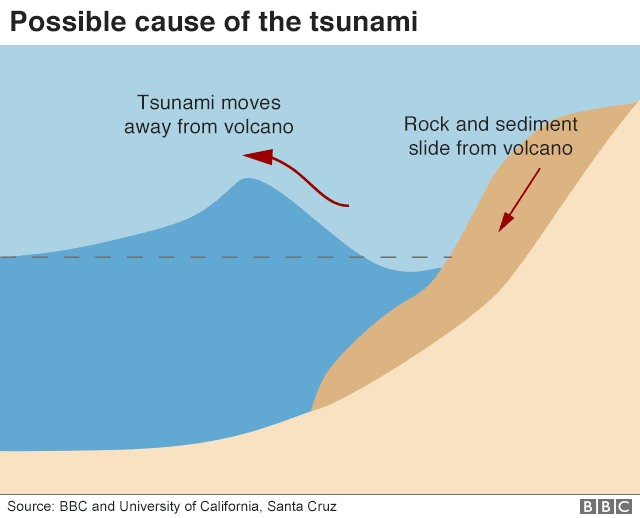 Coastal residents near the volcano have been warned to keep away from beaches amid fears continued volcanic eruptions of Anak Krakatau could trigger a new tsunami.

What is the situation on the ground?
Rescue efforts have been hampered by blocked roads and heavy rain, the BBC's Sameer Hashmi in Banten reports.

There are concerns that contaminated water could spread diseases, our correspondent adds.

Food, water, blankets and medical aid are slowly reaching remote areas, and thousands of people are in tents and temporary shelters like mosques or schools.

"Everybody is still in a state of panic," Atmadja Suhar, official in the city of Labuan, told Reuters news agency. "We often have disasters, but not as bad as this... God willing we will rebuild." 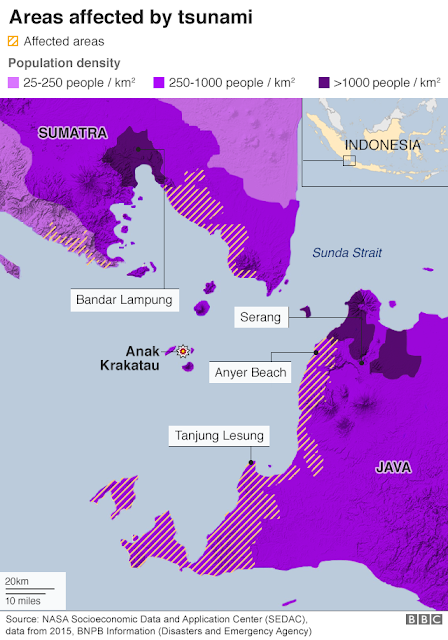 The tsunami struck at 21:30 local time (14:30 GMT) during a local holiday, with few of the warning signals that might have come had it been generated by an earthquake.

The waves destroyed hundreds of buildings, sweeping away cars and uprooting trees in several popular tourist destinations, including the Tanjung Lesung beach resort in west Java.

One of the most shocking and heart-rending stories to have emerged is that of rock band Seventeen, who were performing in the resort when waves came crashing through the stage and swept them away.

How common are tsunamis in Indonesia?

Indonesia is prone to tsunamis because it lies on the Ring of Fire - the line of frequent earthquakes and volcanic eruptions that circles virtually the entire Pacific Rim.

In September, more than 2,000 people died when a powerful earthquake struck just off the central Indonesian island of Sulawesi, setting off a tsunami that engulfed the coastal city of Palu.

On 26 December 2004, a series of huge waves triggered by a powerful earthquake in the Indian Ocean killed about 228,000 people in 13 countries, mostly in Indonesia.

However, tsunamis caused by volcanic activity like this are less frequent.

Krakatoa (Krakatau in Indonesian)
In August 1883, Krakatoa underwent one of the most violent volcanic eruptions in recorded history: