Mukunda Rao’s ‘Sky-Clad’ daringly revisits the life of the spiritual icon in the context of feminism as well as Hinduism in today’s political climate.

“We never perceive the body, or any object for that matter, as it is, but through various filters and channels shaped and managed by culture. That is to say, the body is not a natural object, rather it is a social construct, a cultural representation, shaped through language and various media. We perceive the world, ourselves, our body, too, through language, and in terms of our own background, our culture.”

Mukunda Rao’s Sky-Clad presents a highly critical reading of the body through the figure of a spiritual icon of Indian, specifically Hindu, history – Akka Mahadevi. Rao challenges assumptions of phallogocentrism (a way of thinking that idolises the masculine when constructing meaning) that we take for granted by depicting Mahadevi as a figure straddling borders and challenging binaries in her very existence.

For Rao, the female body is not one that is sexualised (hard as that may be to imagine today) and seen as existing only within the patriarchal narrative. Instead, it is one that ruptures the narrative built around it and advocates for a restructuring of ideology. 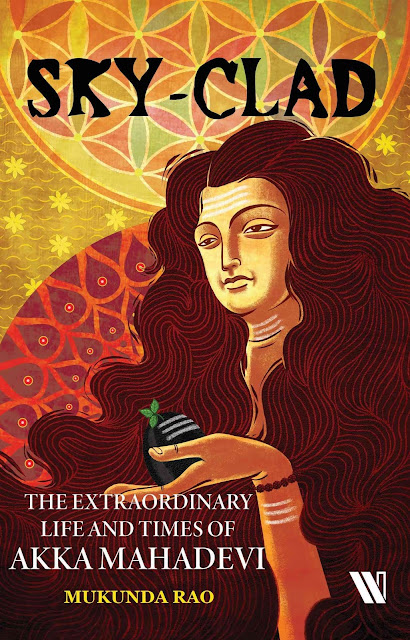 So, Rao takes Mahadevi out of the bhakti narrative in which she is usually placed by depicting how such narratives are often patriarchal constructs. Instead, he locates her in a transcendental philosophy of the body and the mind.

Mahadevi’s journey from a daughter, through wife of Kaushika, to wife of Chennamallikarjuna, is mirrored metaphorically in her physical journey from the luxury of her father’s kingdom to the image of her walking naked, “breast to breast with the cosmos,” to the oneness that is finally presented to us through her tapas and hence her attainment of aikya (oneness with Chennamallikarjuna). She moves from a life within the binaries that imprison the bod, to one where the body has broken the binary mind. Her singular goal through her journey remains constant – “the attainment of a state of being where division has ended”

The image of the binary mind
“Like a snake that sheds its old skin, Mahadevi discarded her needless modesty and cumbersome sari.”

The division of gender, for Mahadevi – and, hence, for Rao – becomes a pressing concern as it seems to hark back to the division between the mind and the body, the divide between atman and brahman. “The body is seen as an enemy, a dangerous animal that needs to be controlled and disciplined.” The female body, specifically, becomes the space where this violence is imposed on it in attempting to curtail it (sound familiar?).

The body becomes a signifier for the female, while the mind becomes the realm of the male – that which governs all and is to be aspired towards. In discarding her clothes and moving “breast to breast with the cosmos,” Mahadevi breaks this division and advocates for a wholeness that has long been lost. She embraces her own body and celebrates her sexuality by shedding her garments, and refuses to allow it to be a hurdle in her quest to attain a union with her beloved.

Her refusal to cover herself and adopt modesty as a strategy represents a blatant overthrow of the structure that seeks to control her. She brings female sexuality to the limelight, and uses it in her quest rather than circumventing it in order to achieve her goal.

The world of poetry
I have Maya for mother-in-law
and world for father-in-law;
three brothers-in-law, like tigers;
and the husband’s thoughts are full of laughing women;
no god, this man.
And I cannot cross the sister-in-law.
But I will…

This vachana depicts a humorous representation of transcendental images in terms of the members of the husband’s family. One can almost picture the poor bride trembling at the centre with tigers crouching around her, ready to pounce. Marriage and its various henchmen act as representations of the binary mind that she needs to free herself from.

While Mahadevi does this literally by leaving Kaushika and her paternal house, she also does it through her vachanas. The poetry that this reading of her life points to possesses the extraordinary ability to convey the restrictions imposed upon us not only through the binary mind but also through language itself. The vachanas use powerful metaphors that refuse to be held captive by language, and signify a multiplicity and a oneness that seek to explode out of the web of meaning imposed on it.

They signify a greater, transcendental truth of oneness that has come to be overshadowed, and thus depict the need to once more reach this state of being.

Mahadevi’s religion
In a world where strict caste rules and codes of conduct govern society, Mahadevi represents a break and a movement away from these structures. However, her use of religion itself in aiding her in this movement away from these restrictive systems becomes key to her portrayal as a figure of subversion. She refuses the role of an earthly wife by claiming the position of a heavenly one – that of Chennamallikarjuna’s. She uses her staunch religious sentiments as a means to refuse the “duties” of a daughter and of a wife that women were held to.

Further, her claim to these very religious sentiments in explaining her nakedness embodies her role in overthrowing the system by operating within it: “Prabhu, there is nothing I can call my own. Absolutely nothing, not even this body. Everything is his. And when everything is his, what is there to hide?”

Akka Mahadevi: a feminist figure?
Operating within the discourse of early traditions, Mahadevi’s tale depicts hilarious caution in its addressing of the narratives. She faces an agnipariksha when she is forced to withstand a trial in the presence of Allama Prabhu – a male devotee – and answer his questions. Rao has criticised the need for the classic agnipariksha where a male figure is required to grant his blessing and allow the passage of the female; however, her role as a feminist figure emerges when she uses the language of the male oppressor – in this case, religion – to support her actions. She subverts the system using the system, and hence earns her place as an early feminist icon by not seeking to reverse the binaries, but by breaking the binaries themselves.