How do Muslims mark Christmas? How do you give someone a maid-a-milking? And what are mince pies?

What is Christmas?
The short answer is that it’s a Christian festival that celebrates the birth of Jesus.

According to the nativity story, Mary and Joseph travelled from their home in Nazareth (in what is now Israel) to Bethlehem (in what is now the West Bank) to take part in a census. Months earlier, Mary had been visited by the Angel Gabriel and told she would give birth to a boy who she would name Jesus, and who would be the son of God. The child was delivered in a stable. Shepherds and wise men brought birthday gifts.

The bible does not specify the date of Jesus’s birth. Some people have suggested it was in the spring because of the custom of sending sheep into the fields at that time of year. “And in the same region there were some shepherds staying out in the fields, and keeping watch over their flock by night.” (Luke 2:8)

25 December is the day that the Roman Catholic and Protestant churches celebrate Christmas, but many Orthodox Christians use the Julian calendar, which runs 13 days behind the standard international Gregorian calendar, for religious festivals. Christmas is celebrated by Orthodox Christians on 7 January in Russia, Ukraine, Serbia, Belarus, Egypt, Ethiopia, Georgia, Kazakhstan, Macedonia, Moldova and Montenegro.

So there was no holiday season before the birth of Jesus?
Not as a festival to celebrate the nativity, obviously. But the reason why Pope Julius I picked 25 December was to appropriate pagan midwinter festivals and transform them into a Christian occasion.

In Scandinavia, the Norse celebrated ‘Jul’ (Yule) from the winter solstice (21 December) for as long as it took for large logs to burn out, usually about 12 days. There was plenty of meat as animals were slaughtered so they wouldn’t need feeding over the winter, and home-brewed wine and beer was ready for drinking at Yuletide.

In Rome, Saturnalia – honouring Saturn, the god of agriculture – began just before the winter solstice and continued for seven days. Men dressed as women, masters dressed as servants, and there was much feasting and rowdy behaviour.

In the British Isles, druids cut and blessed mistletoe to mark the winter solstice. 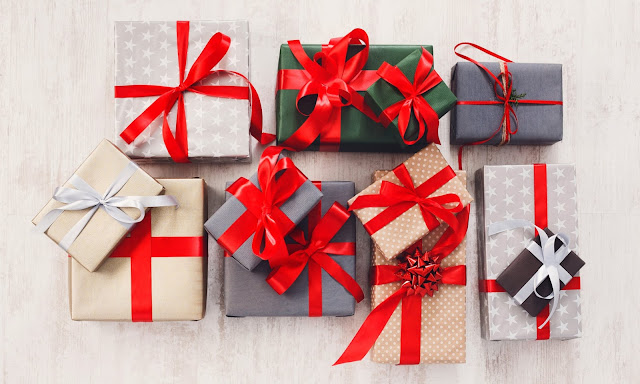 Who is Father Christmas?
Aka Santa Claus and St Nicholas. Nicholas was a 4th century bishop, a rich man who secretly gave gifts to the poor. One beneficiary was a man with three daughters who could not afford dowries to marry them off. Nicholas dropped a bag of gold down the man’s chimney which fell into a stocking that had been hung up to dry. The bishop was persecuted, exiled and imprisoned for his faith. After his death on 6 December, the date became an occasion on which children were given small gifts in his memory and, in some countries, children still open presents on St Nicholas’ Eve, 5 December.

Later, St Nicholas was usurped in popular culture by Father Christmas or Santa Claus. According to legend, FC/Santa travels through the sky on a sledge pulled by eight reindeer adorned with jingle bells to slide down chimneys and deposit presents by the fireplace. The story has endured despite the fact that most homes no longer have chimneys or fireplaces.

In these days of gender sensitivity - when even the archbishop of Canterbury has intimated that God may be gender-neutral - FC/Santa robustly adheres to a masculine identity. This year, councillors in Newton Aycliffe, County Durham, have formally ruled that FC/Santa must be a man after a woman controversially offered to play the role in the town’s parade. This could keep lawyers in business for years.

And it’s been “always Christmastime” ever since?
Not quite. When Oliver Cromwell and his Puritan forces took over England, Christmas was banned. Noting that the date of Jesus’s birth is not in the Bible, the Puritans decided it was all a just a pseudo-Christian gloss for the earlier pagan festivals. In 1644, Christmas was outlawed – no decorations, no mince pies and definitely no decadence. An “Ordinance for Abolishing of Festivals” was passed by parliament in June 1647 banning Christmas, Easter and Whitsun. In the US, where the Puritans were even more, well, puritan, anyone showing a bit of Christmas spirit in Boston faced a hefty fine of five shillings. Some referred to Christmas as “Foolstide”.

Along with the monarchy, the festival was soon restored, and it was the Victorians who really shaped Christmas as we know it today. They instituted carol singing, decorated trees and the exchange of cards. The first Christmas tree was brought from Germany by Prince Albert to the royal household in the 1840s. These days, about 7m real trees are sold in the UK each year, and as many as 30m in the US.

Spending on Christmas gifts reached a peak in 2014, at an average £604 per household. Typical monthly household spending on food increases by 20% in December, and alcohol purchases increase by 30%. Last year, about 1bn Christmas cards were sold in the UK. An estimated £355m worth of unwanted presents will be returned after the UK holiday as Britons try to shed a collective weight gain of 127m kg (20m stone) over the festive period.

One in six people say it takes up to a whole year to pay off the cost of their Christmas splurge, and then the pressure to spend begins piling up again from about mid-October onwards.

So it’s more of a capitalist extravaganza than a Christian festival now?
Perhaps, but Christmas is also a boom time for churches, with many people attending a service over the holiday even if they don’t consider themselves to be believers. Even some hardened atheists find candle-lit midnight mass on Christmas Eve or a children’s nativity service hard to resist.

Church of England figures show that 2.68 million people attended a Christmas service in an Anglican church last year, compared to an average Sunday attendance of 722,000. The 2017 figure was a 10-year high, although only a marginal increase on the year before – and it’s still less than 5% of the population of England.

This year the C of E has launched a digital campaign, #FollowTheStar, inviting people to visit their local church over Christmas.

What about non-Christians – those of other faiths, or of no faith?
Indeed, there are a lot of them. According to the British Social Attitudes survey published in September, six in 10 people either say they have no religion (52%) or identify with non-Christian faiths (8%).

Rather then being resentful of a Christian festival, Muslims often commit to extra charity work over the Christmas period, and some mosques hold special lectures about Jesus, considered in Islam to be a prophet. The festival of Eid al-Fitr, the festival that marks the end of the holy month of Ramadan, is sometimes called (by non-Muslims) the Muslim equivalent of Christmas in as far as it is a time spent with family and gifts are exchanged. The next time Eid al-Fitr and Christmas coincide is 2033.

The phrase “Happy Holidays” has become commonplace as a catch-all for Christmas, Hanukkah (the Jewish festival which falls close to Christmas), and the non-religious. “Chrismukkah” interfaith greeting cards are available for those who want to mark both.

And for those who simply don’t want any part of any festivities, there is always the tax return. More than 2,500 people filled in HMRC online self-assessment forms on Christmas Day last year.

What in the name of Jesus are mince pies?
Today, they are round and sweet, but they used to be oblong and savoury. Mince pies date back to the 13th century, when they were known as mutton, minched, shrid or Christmas pies, and contained principally meat along with suet, fruit and spices. The Victorians made them sweeter, although suet remained part of the “mincemeat” recipe until food companies tuned into the needs of vegetarians and vegans. The average Briton apparently eats 27 mince pies over the Christmas period, but 20% of the 370m bought each year are thrown away. Few people make their own from scratch these days, and why would you when you can choose from chocolate and cherry mince pies, gin mince pies, salted caramel mince pies, chocolate orange mince pies …?

What about turkeys? Well, goose, pheasant, swan and peacocks were the roast birds of choice for the Christmas dinner table for centuries. King Henry VIII was known to eat turkey at Christmas soon after the bird was introduced to England in 1526, but it didn’t become widespread until the 1950s. Now about 10m are eaten in 76% of UK households at Christmas.

Didn’t they try to cancel Christmas?
Not quite. There’s little real evidence of opposition to Christmas as a festival, but there have been many ill-founded media stories about the “war on Christmas”.

The council was accused of “political correctness gone mad”, even though it hoisted a “Merry Christmas” banner across the town hall, put up Christmas trees in city squares, hosted carol-singing sessions, and the Lord Mayor sent out a card depicting a traditional Christmas scene and wishing recipients a Merry Christmas.

A few years later, Luton borough council was accused of “cancelling Christmas” in order not to offend Muslims. Critics wrongly claimed the council leader had tried to substitute a Harry Potter festival called Luminos for a proper Christian Christmas. In fact, the council’s Luminos festival had taken place over a November weekend three years before the row broke out.

Well at least it’s all over by Christmas night, right?
Not quite. After Christmas Day comes Boxing Day, a public holiday in the UK, also known as St Stephen’s Day. The name refers to a Christmas box traditionally given to servants and tradespeople, containing money, a gift and sometimes leftover food. It used to be a big fox-hunting day and is filled with top sporting fixtures, but mainly it signals the start of the post-Christmas sales for those with any money left over.

And it doesn’t end there. In theory, the Christmas festival lasts 12 days, until 6 January, the day when the three wise men turned up in Bethlehem with gifts of gold, frankincense and myrrh for baby Jesus. Traditionally, the celebrations continue and the decorations remain in place until 12th night, also known as Epiphany.

The song The 12 Days of Christmas, which started life as an 18th century rhyme before being set to music by Frederic Austin in 1909, logs all the gifts given to the singer by his or her true love, ranging from a partridge in a pear tree to 12 drummers drumming. One financial services group estimates the cost of the gifts this year at more than £30,000.

How do you pay for a maid-a-milking?
It’s not clear. You can’t call them maids any more, and most milking is done by machine.

What next?
Easter! This is the Christian festival marking the crucifixion and resurrection of Jesus. The gap between Christmas and Easter varies between three and four months, and this time it’s on the outer edge of that range with Easter falling on the third weekend of April. Or, for the resolutely non-Christian, there’s the spring equinox on 21 March. Until then, Merry Christmas and Happy Holidays …

(Source: The Guardian)
Posted by Arjunpuri at 04:00