Were there more than Three Kings?

Thirty years ago there were 50,000 Christians in south-eastern Turkey speaking a dialect of Aramaic - the language of Christ. Now there are 2,500. Talking to one of them, the BBC's Jeremy Bristow learned that instead of Three Kings, there might actually have been 12.

Fresh out of his farm clothes, Habib the mayor now sits at his table in a crisply ironed shirt. He's a gentle, almost diffident man in his early 50s, but he can form his letters with a calm assurance. He's the custodian of a dying language. 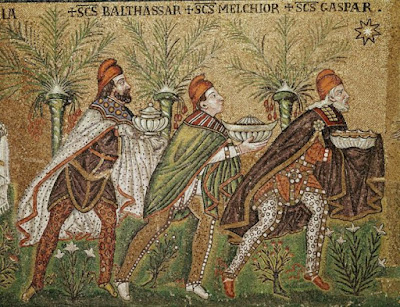 Dipping his pen into the inkwell, he momentarily pauses, then starts to write. The broad nib moves right to left in neat black flicks and dashes, some vertical, some slanted, some horizontal, often with a deft flourish at the end. Sometimes Habib fashions a triangle, sometimes a circle, sometimes he adorns the shapes with a dot, indicating a vowel.


The script that is emerging before me looks like Arabic. It's not… or not quite. It's Syriac, a dialect of ancient Aramaic.

"Look, let me show you," he says. "This letter is Olaf in our script, Alef in Arabic. See here, this letter is Lomad, it resembles Lam in Arabic. And He is Ha. Written together, they spell Aloho in Aramaic, the equivalent of Allah in Arabic. So many words from the Koran come from Aramaic."

For 1,000 years, Aramaic was written and spoken right across Middle East. It was the language spoken by Jesus and his followers. The Jewish holy book, the Talmud, was written in Aramaic, and scholars say Arabic script is derived from it. But now, if Aramaic was an animal species, it would be declared critically endangered.

Habib, a Syriac Christian, is one of just 2,500 Syriacs who still live in this remote part of south-east Turkey. They call this region, their homeland, Tur Abdin. In Aramaic this means the Mount of the Servants of God.

Once upon a time there was a flourishing Christian civilisation here. The landscape boasts hundreds of monasteries and churches - many now in ruins, many surmounted by mosques.

Take for example, Habib's village of Hah, where he's mayor, or Anitli as it is known in Turkish. A mere 20 Syriac families now live among the ruins of what was once a cathedral city with thousands of houses. Their homes are built among the remains of great buildings. Crumbling walls and giant archways loom above them.

Six hundred years ago Hah was sacked by the armies of Timur the Lame, better known in English history as Tamberlaine. This was just one catastrophe in a long history of intermittent persecutions and occasional acts of terror that religious minorities like the Syriacs have had to endure in this part of the Middle East.

Habib's family have survived by holding out in their fortress-like farmhouse that still stands above the village. Five other related families also live within this bastion, towering walls on the outside, farmyards within. 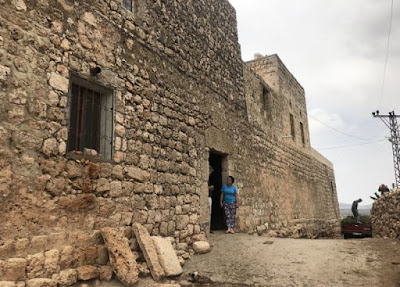 Habib says his family, the Beth Henno, have been here since records began. But so many Syriac Christians have left for Istanbul, for Sweden, Germany, Australia. In the last three decades they've been caught up in the brutal war between the Turkish state and the Kurdish Workers Party, the PKK. They've been threatened and driven out by both sides. In the 1980s 50,000 lived in Tur Abdin, now less than 5% of that number remain.

Habib and his wife, Leman, are doing their best to boost the numbers, raising seven children on their farm. 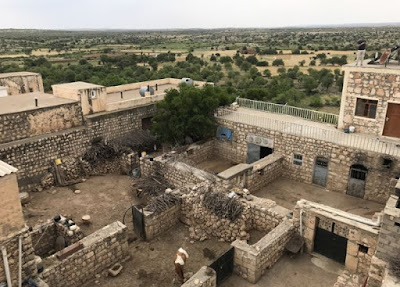 We walk down through the village, in the shadow of crumbling towers and gaping vaults, entering the courtyard of the Church of the Yoldath Aloho, the Mother of God. As I enter the nave I know I am standing in history. Is that the smell of ancient cement, or is it rotting plaster? 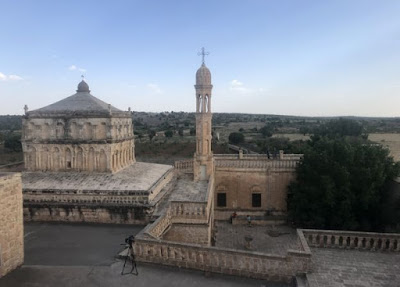 The walls and niches are covered in a riot of carved decorations covering arches that support a soaring octagonal dome. It's here that Habib and the villagers still come to chant the hymns of Saint Ephraim, as their ancestors have done since the Church was built, nearly 1,500 years ago.

They will be here at Christmas. Habib tells me a local legend. Just over 2,000 years ago an auspicious star appeared in the night sky. Twelve kings from the East gathered here at Hah. A select three went on to Bethlehem bearing gifts to greet the newborn Christ. A grateful Mary, mother of God, gave them a piece of the baby's swaddling clothes. When the three kings returned to Hah, the holy baby-wrap turned to gold. Awed by this miracle, the Kings founded this church.

As we walk back in to the courtyard, I hear the village children reciting, Aramaic in class. I ask Habib, what the future is for the Syriac community here in Tur Abdin, the Mount of the worshipers of God. "We won't give up,'' he says. "But I fear, in the end, we are too few."