Vijay Sethupathi, who turns 41 today, has portrayed the kind of diverse characters that some actors take their entire career to play out.

During Petta’s audio launch, Rajinikanth spoke about all his co-artists. But he was particularly vocal when he started talking about Vijay Sethupathi. He finished saying, “After a long time, I am having a feeling that I have worked with a very good actor.”

It comes off as a surprising comment because the Superstar has acted with the likes of Nana Patekar only very recently. But it is obvious that Rajinikanth, like most of us, is floored by the performer in Vijay Sethupathi. He might have been equally stunned that Vijay Sethupathi decided to do such a small role in Petta despite his current stature in the industry. It goes without saying that what makes Vijay Sethupathi a standout in Tamil cinema today is his selection of scripts and roles. 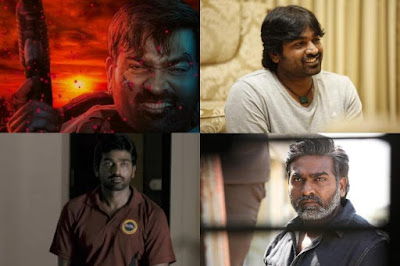 Vijay Sethupathi, who turns 41 today, started off as a junior artist and small-time actor in 2004. He struggled for many years till he found his foothold. It was in 2012 that the substantial roles in Sundarapandian and Pizza helped us know about the actor. But look at the characters he has played since then.

These are the kind of diverse characters that some actors take their entire career to play out. Vijay Sethupathi has played them all in 6 years and 3 months now, since Pizza in October 2012.

Vijay Sethupathi enjoys this freedom of choices by walking a path different from the other top league actors in the Tamil film industry. Most others have a familiar pattern to their career graphs. They start with earthy characters. They get to do experimental roles and just be a part of the screenplay in the initial part of their careers. But once they attain stardom, popularity and fan following, things change. They get fitter physiques and better looks. No matter what the story-line is, their movies will feature action sequences and song-and-dance routines at regular intervals.

Now take Sethupathi (2016), which was a significant movie in Vijay Sethupathi’s career. This movie could have decided the direction in which the actor could go next. It was a mass action entertainer. He played a police officer and the movie was a big hit. It is the kind of make-or-break movie where any other Tamil actor would have finally transformed into the “Star”. But Vijay Sethupathi decided to stay to his roots.

In his very next movie, Kadhalum Kadandhu Pogum, the actor walks in slow-motion into a bar. He then gets beaten up by all the guys. But he stands up, puts on his sunglasses and then again walks out in slow-motion. Which other top actor does that anymore?

In Vikram Vedha (2017), his character ‘Vedha’ gets a good build-up and a stylish slow-motion introduction, which is typical for a big star. In theatres, it was greeted with cheers and applause, which indicates the mass fan following he has now. Still Vedha doesn’t have a heroine in the movie. In fact, he asks other characters in the movie whether they want to hear his love story and no one seems interested! Even after Vikram Vedha’s big box office success, the actor is still content playing a small part in Chekka Chivantha Vaanam or Petta or a restrained lover in 96.


A phenomenal actor
What complements Vijay Sethupathi’s choice of roles is what a phenomenal actor he is! His impeccable comic timing is one of his biggest strengths. In Naduvula Konjam Pakkatha Kaanom, his character, Prem Kumar, tells the lines that start with “Enna achu, cricket velayadinom” so many times. Yet it is a gift to have an expressive face that ensures that the viewers are not bored by it.

In Kadhalum Kadanthu Pogum, Yazhini (Madonna) asks him to mug up a few lines to narrate in front of her parents. When he muddles them up and messes it up, the actor has a straight face. But the viewers just couldn’t stop laughing. In Kavan, the actor’s attitude is hilarious when he doesn’t give a damn about the politician he is interviewing. All he cares is to expose him in front of the television viewers.

In Soodhu Kavvum, when Das is introduced, we think he is a big-time kidnapper. He takes a girl into the back of his van. Just as he returns to the driving seat, the girl comes out and beats him left and right. It is a scene that leaves you in splits every single time.


In Naanum Rowdy Thaan, his gestures are uproarious in the sequence where he brings Rs 10 lakh when the don (Anand Raj) had only asked for Rs 9 lakh! Aandavan Kattalai is perhaps his most underrated movie. His character Gandhi reminded you of the kind of comedy roles that Kamal Haasan used to do in the 90’s. The movie had no slapstick or crass humour. But the laughs were derived out of situations, dialogues and the body language of the actor.

After 96, it perhaps doesn’t have to be proved further that Vijay Sethupathi is a natural in romantic scenes. A few hours before Jaanu (Trisha) is about to return to Singapore after their class re-union, the power goes off. Ram walks into a room to find a torch. After years of persuasion, it is then where Jaanu finally sings ‘Yamuna Aatrile’. Ram breathes heavily and loses his mind. He rushes back inside the room to take the torch and stumbles into things. He then finally returns to her. It takes an exceptional actor to let us go through the character’s mind in those moments when it is also actually dark on screen. Vijay Sethupathi’s performance in 96 was superb.


Trademark style
The actor won the 2012 Tamil Nadu State Award for Best Villain in Sundarapandian, in his first breakthrough role itself, which shows that negative roles also come quite easily to him. Vijay Sethupathi is often beautifully restrained in emotional scenes, letting his eyes speak. In Vikram Vedha, whenever Vedha talks about his beloved brother, his voice stammers and our hearts melt.

Even the actor’s stunt sequences have his own trademark style. How often do you see a romantic melody like ‘Yennai maatrum kadhale’ in the background as in Naanum Rowdy Thaan, when he gathers his strength, gets up from the ground and starts hitting back at the bad guys? In Vikram Vedha, there is an instance where you don’t see the actual fight. But after that, Vedha is sitting there to ask Vikram (Madhavan), “Are these factory godowns made for work or for people like us to just fight?”

Vijay Sethupathi has had his share of mediocre movies, such as Junga, Rekka and Karuppan. But the actor has often found ways to bounce back from a failure immediately. You cannot keep a skilled actor with a keen eye for scripts off his game for long.

In a Facebook post from December 2010 that became viral recently, director Karthik Subbaraj expressed his excitement and wished his friend Vijay Sethupathi prior to the release of Thenmerku Paruvakaatru, his first movie as a main lead. A cinegoer commented on the post and asked: “Who is Vijay Sethupathi?” To which Karthik replied with a smiley – “You will know him soon.”