Two five-year-old girls who left their nursery in Siberia in bitterly cold temperatures unnoticed by their teachers have been found.

The two, who wanted to surprise their parents, suffered frostbite and hypothermia.

They walked home on one of the coldest days of the year in temperatures of -45C (-49F).

They were caught on camera as they slipped out - one clutching a cuddly toy and with no mittens on.

One girl is now in hospital in the regional capital, Yakutsk, with three fingers frostbitten, the Siberian Times reports.

Her mother, Evdokia Kutukova, said: "Three of her fingers froze hard. She is crying.

"The children are still in shock."

She noticed her daughter Lena had gone missing in the village of Namtsy when she went to the nursery to collect her and saw her coat was missing.

She raised the alarm with staff, and then it was noticed her daughter's best friend, who has not been named, was also missing. Her parents did not know where she was either.

But Ms Kutukova said the family's grandfather then called to say Lena had just arrived home, alone, in tears and frozen.

Her husband said a passing stranger had given their daughter a scarf, which had helped her.

"How cold it was without gloves, it's hard to imagine, and with a toy in her hand!" 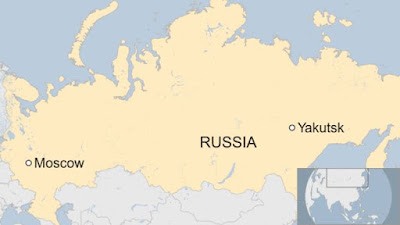 The other girl got lost on the way home in the village in darkness and was found an hour later. She had taken shelter in a nearby house.

"It is good that she was not frostbitten, just extremely cold."

The girl suffered from hypothermia, but went home after being checked over by doctors.

The girls had never left the nursery by themselves before.

An investigation has been opened to find out how the incident happened.