The color forecasters at Pantone have declared 2019 the year of Living Coral. In the press release, the company describes this orangey pink hue as “vibrant, yet mellow,” providing “warmth,” “buoyancy,” “nourishment,” and “comfort.” Reading the release is a bit disconcerting. According to Pantone, Living Coral can both release us from the grips of “digital technology” while retaining a “lively presence on social media.” This color reminds us equally of snorkeling and scrolling, the company seems to suggest. It’s a natural hue—and a digital one. Pantone calls the color “life-affirming,” a bitterly ironic statement, considering the continued annihilation we’re inflicting on these small animals.
Coral may be this year’s official color, but its history stretches back to the beginnings of the world. According to Greek mythology, Medusa was once a girl, fair and soft. Her hair did not writhe but rather fell in soft golden waves and her gaze did not turn men to stone, but made them quiver with lust. She was, according to Ovid, “the jealous aspiration of many suitors.” She was lovely as a whole, but none of her features were as admired as her silky blonde mane.

But in a world ruled by brutal gods and equally brutal men, women are not permitted to wear their beauty easily. Medusa was raped, violated by Poseidon, god of the seas, in a temple dedicated to the goddess Athena. This savage attack enraged the goddess, but she was not angry with Poseidon. Instead, she punished the victimized blonde, turning the Gorgon’s hair into “foul snakes.”

Medusa became a monster, and as we all know, monsters must be slain (particularly if we’re talking about female monsters). According to legend, the hero Perseus did the job. He darted past Medusa’s “eager jaws” and struck her barnacle-encrusted neck with his sword, parting her head from her grasping, winged body. Perseus took the once-deadly cranium as a trophy, and displayed it on a bed of seaweed. “The fresh plants,” wrote Ovid, “still living inside, and absorbent, respond to the influence of the Gorgon’s head, and harden at its touch, acquiring a new rigidity in branches and fronds. And the ocean nymphs try out this wonder on more plants, and are delighted that the same thing happens at its touch.” Thus coral was created, made from the still-warm blood of a rape victim and the soft green fronds of underwater vegetation.

The ancient Greeks did not view coral as a living thing. To them, coral was as dead as stone, lifeless as a ruby or a dirty fistful of gold. Coral was bloody, coral was petrified. Coral was the beautiful remains of a violent victory.
Our understanding of coral has grown by leaps and bounds. The Romans figured out that coral wasn’t a stone, and in the first century AD, Pliny the Elder suggested that coral belonged to a group with sea nettles and sea sponges, “nether animals nor plants, but possessed of a third nature.”

In the early eleventh century, Persian scientist and scholar Al-Biruni observed that coral responded to touch, shying away from the graze of a hand. In the eighteenth century, William Herschel examined coral cells under a microscope. He saw that the cells didn’t look like plant cells—they lacked a thick membrane—and deduced that coral was an animal. A colorful, mysterious animal, but an animal nonetheless.

Although for most of human history, we didn’t really know what coral was. We’ve used coral for jewelry as much as we used emeralds and rubies, amber and wood, ivory and bone. The favored color for European jewelers has always been that vivid orangey pink, lighter than fuchsia, more saturated than salmon.

While coral exists in many shades (from black to violet to muddy green-brown), the color we associate most strongly with the creature is that juicy hue, which falls somewhere between the color of ripe papaya and a summer watermelon (pinker than one, more orange than the other). This breed of coral is called Corallium rubrum, and can primarily be found in the Mediterranean, along the Italian and Portuguese coasts. It grows in sea caves and shallow straits. In the wild, coral looks matte—it’s only after being polished by human hands that it develops its characteristic shine.

People have been harvesting and trading coral for thousands of years. Precious red coral also grows off the coast of Japan, and in the waters around Taiwan. It’s a somewhat ubiquitous substance; the animal seems to thrive in areas where the sea is warm, clear, and salty. Even though coral reefs only cover 0.1% of the earth’s surface, its undulating multicolored surface has inspired legends and myths around the globe, from India to Italy. In Hindu astrology, coral is associated with Mars, and jewelry made from the gem is supposed to help the wearer triumph over fear and adversity.

Coral features in numerous Hawaiian myths, and is traditionally associated with one of the four major gods, Kane, god of procreation. The Shinto sea god, Ryujin, was said to live in a palace under the waves, made of delicately carved red and white coral. Pliny the Elder believed coral helped protect men against the machinations of temptresses. In Christian tradition, coral is said to symbolize the blood of Christ (many Renaissance paintings show the infant Christ is holding a branch of coral or wearing a coral rosary, foreshadowing his eventual bloody sacrifice).

Like other precious materials, coral has dipped in and out of fashion, while retaining a stalwart group of fans. In 2016, the New York Times published a piece by Abigail R. Esman on the “soft call of coral.” Esman documents how coral’s popularity peaked in the twenties, and again in the seventies, when raw coral, left in its branch-like form, became a “hot accessory for hippies.” Over the past century, rising demand lead to the destruction of coral reefs in the Philippines, off the coast of Japan, and in the Mediterranean.

“Where there were ‘trees’ of up to two feet tall,” reports the Financial Times, “there are now one-inch stubs.” Coral harvesting has transformed wild underwater forests into barren grassy plains. While there are laws in place to protect areas from overharvesting, they are poorly enforced, says Ernie Cooper, director of Traffic (a wildlife monitoring network) and WWF Canada. “Conservation is achieved through government and laws,” he told the Financial Times. “But laws without enforcement are simply advice.”

Esman notes that today, “houses like Dior and Cartier continue to use coral in their designs but concern about its scarcity—the result of centuries of overharvest—have led many jewelers to reconsider.” Some jewelers, including Tiffany & Co., have stopped using coral, while others (like German designer Otto Jakob) have elected to only work with vintage pieces.

It may not matter. People are killing coral every day. It happens when you press down on the gas pedal, it happens when you board a plane, it happens when you flick on the light switch. Ocean acidification and climate change are “bleaching” the coral reefs, and a white reef is a dead reef. Since 2016, over half of the Great Barrier Reef (located along the Australian coast) has died. “The Great Barrier Reef was always considered the most stable and protected reef system in the world,” wrote Trevor Nace for Forbes in April 2018. “However, the recently published study finds that even the strongest and healthiest coral reef system in the world is no match for the methodological rise in ocean temperatures.” 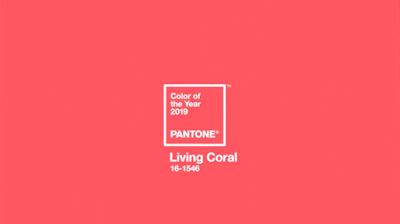 It’s not surprising that Pantone would choose a seemingly eco-friendly color (one that Apple has already selected for the honor of adorning an iPhone) while reminding users how much this hue pops on Instagram. It’s not surprising, but it is depressing. Companies always want to have it both ways, particularly as we slide further into late capitalism, a cursed era where supposedly woke corporations can send snarky tweets about capitalism while trying to sell us junk.

I was similarly deflated last year, when Pantone claimed Ultra Violet as the Color of the Year, arguing that it was a bipartisan color, one that had the power to heal our fragmented country, torn asunder by the power of white supremacy, election interference, domestic terrorism, and alt-right radicals (many of whom where, ironically, indoctrinated on social media).

In 2017, Pantone named Greenery the Color of the Year, in a move that was intended to spark environmentalist feelings in consumers, perhaps even encouraging design-interested folks to make “green” choices in their purchasing and production, and ignoring the fact that green is one of the most toxic dyes to produce. Pantone has already shown us that they’re willing to pay lip service to the hopes and fears of the general populace. Living Coral is just more of the same. I’m no trend forecaster, no digital Cassandra, but I strongly suspect that this won’t be enough to save the oceans. The world will keep heating, coral will keep bleaching, and we won’t rise to the occasion to protect the substance that we have used, for hundreds of years, as a symbolic shield against harm.

But perhaps this is what makes Living Coral a fitting color for 2019. It’s a bittersweet hue, the color of dead women and dead animals, magical blood and mystical protection. Global warming feels crushingly huge, its magnitude tips us away from action and toward despair. Living Coral, bright and juicy and happy, feels like a dose of visual hope, whether we deserve it or not. And there may be hope for coral. Scientists are currently working on a project that has been described as “IVF for the reef.”

They’re collecting coral spawn (which look like pearly versions of corn on the cob) and using it to regrow dead sections of the Great Barrier Reef. This has only been going on for a few months, so we don’t yet know how the project will turn out. Maybe we won’t be able to replenish the coral. Maybe the hue will exist only in the digital realm, on screens and not in seas. But maybe we’ll be able to refertilize the once-vibrant forests. Maybe coral will flourish across the ocean floor more. And maybe, someday, we’ll be able to quit our addiction to stolen colors and leave this living gemstone alone.