Confessions of a Karnataka voter: Don’t blame us for the MLAs we never voted for

We cast our votes for caste, religion, money and muscle power. We voted for the party symbol and not the person who is seeking our vote to represent us, writes Srinivas Alavilli on The News Minute. Read on:

Voters of Karnataka are feeling angry, cheated and stricken with guilt after days of #ResortPolitics #MLAsBrawl #OperationLotus playing out in national media. The collective feeling can be summed up in one word: shame.

But I think there is nothing here to be shameful of. Absolutely nothing. Because we never elected these MLAs that are now on sale and being ferried state to state, resort to resort, in the first place. Contrary to popular perception, we did not vote for them. Don’t get me wrong, we did cast our vote but not for any of these ‘elected representatives’. 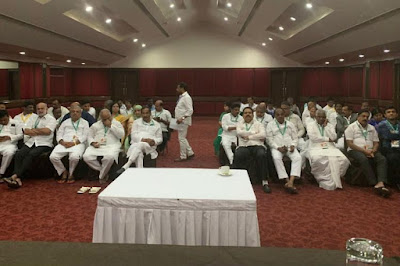 We voted for some party that is supposed to represent the best interests of “our caste". How can any other caste get dominant position in our politics? That would hurt our future so instead of evaluating the merits of various candidates, we ensured the remarks “India votes caste” holds good even in 2018.

We voted for a party that will take care of “our religion” and makes sure the “other religion” doesn’t get political power. Never mind what the Constitution says, we made elections about spreading religious hatred.

We happily voted for criminals and money bags who we very well know didn’t make their fortunes legitimately because we are too focused on getting our party in power. We avoided even looking at the face of an actual candidate leave alone his or her track record, skills and capabilities to be a legislator in the state Assembly. We were eager to support even a lamp post that got the ‘ticket’ never mind deserving candidates that are independents or from small parties trying to change the system.

We pressed the button next to names who we won’t ever invite home for tea or trust with our children for five minutes because we believed these names have been “selected” by party and they are “winnable”. We played along.

We never voted for these people in the first place.

So why should we feel ashamed?

The great leaders of our party and caste will “take care” of the situation. Soon.

Life will be back to normal, we will vote again for the same MLAs that are currently in resorts throwing stuff at each other, negotiating their price to defect, seeking positions of power where there is scope to make a killing. Who cares if they didn’t make any positive difference as legislators.That stuff is not nearly as important as our loyalties to the caste, religion and party!
Posted by Arjunpuri at 14:00