I’m so sick of this war on masculinity and I’m not alone: Piers Morgan

It’s been a very bad week for men.

Yesterday, the American Psychological Association released a set of guidelines that condemned traditional masculinity as ‘harmful.’

Specifically, it stated that male traits like ‘stoicism’, ‘competitiveness’, ‘achievement’, ‘eschewal of the appearance of weakness’, ‘adventure’, and ‘risk’ are bad and should be expunged.

I literally choked on my bacon-and-sausage sandwich (my contribution to Veganuary) when I read this absurd load of PC-crazed bilge.

It’s basically saying that it’s wrong, and harmful, to be masculine, to be a man.

As David French, a writer for the National Review, put it in his withering response to the report: ‘The assault on traditional masculinity – while liberating to men who don’t fit traditional norms – is itself harmful to the millions of young men who seek to be physically and mentally tough, to rise to challenges, and demonstrate leadership under pressure. The assault on traditional masculinity is an assault on their very natures. Are boys disproportionately adventurous? Are they risk-takers? Do they feel a need to be strong? Do they often by default reject stereotypically ‘feminine’ characteristics? Yes, yes, yes and yes.’

I’ve got three sons and a daughter.

My siblings have eight girls and a boy between them.

So I’ve had plenty of experience watching all 13 of these children (their ages range from two to 25) grow up.

And here’s a cast-iron fact for you: girls are very different to boys.

Anyone who’s actually had kids knows this.

Yet somehow, it’s become offensive to say it out loud.

The incessant poisonous war on gender has culminated in the very word ‘man’ being decried as an abusive term, to the extent that Princeton University actually issued a ridiculous four-page memo instructing students to only use gender-neutral language.

Even the word ‘mankind’ had to be replaced by ‘humankind’.

But it turns out that the American Psychological Association’s disgraceful report wasn’t even the worst attack on men this week.

No, that inglorious honour falls to razor company Gillette.

For 30 years, the company has used the tagline ‘The best a man can get’ to persuade people like me to part with large sums of money for their expensive shaving blades and foam.

Its commercials have unashamedly celebrated men and masculinity.

You watch them and feel good about being male.

Not just because they make you aspire to be a winner and successful achiever, but because they also encourage you to be a good father, son, husband and friend.

As a result of this consistently upbeat and positive marketing style, Gillette has grown into the most successful razor firm in history, generating annual sales of $6 billion a year.

In fact, only yesterday I spent over $150 stocking up on its latest range of Gillette blades and foam.

I didn’t do so because their stuff is any better than their main competitors. I’ve tried them all and it’s not.

I did so because I like Gillette’s brand and what I thought it stood for, and the company’s never done anything to p*ss me off.

Then I saw its new commercial, a short film entitled ‘Believe’, which has a new tagline: ‘The best men can be’.

And I suddenly realised Gillette isn’t the brand I thought it was at all.

Gone is the celebration of men.

In its place is an ugly, vindictive two-minute homage to everything that’s bad about men and masculinity.

The film asks ‘Is this the best a man can get’ before flashing up images alluding to sexual harassment, sexist behaviour, the #MeToo movement, bullying and toxic masculinity.

Interspersed is a patronising series of educational visual entreaties about what men should in various unpleasant situations.

The subliminal message is clear: men, ALL men, are bad, shameful people who need to be directed in how to be better people.

It’s one of the most pathetic, virtue-signalling things I’ve ever endured watching.

Gillette said the purpose of the ad was to urge men to hold each other ‘accountable’ for bad behaviour.

Right, because the one thing that’s not happening right now in the world is men being held accountable for bad behaviour!

Jeez, it’s hard to think of a single minute of any day where men aren’t being summarily hung, drawn and quartered somewhere for alleged bad behaviour – their careers and lives destroyed.

Not in most cases through due process in a court of law, but often on the mere say-so of a Facebook post by an angry ex-girlfriend making allegations that may or may not be true.

I don’t seek to diminish the importance of the #MeToo campaign which has shone an important and long overdue light on completely unacceptable sexual harassment, bullying and abuse.

But why should all men be tarred with the same monstrous brush in the way this Gillette campaign sets out to do?

If I made a commercial aimed at female customers predicated on the generalised notion that women are liars, cheats, psychopaths and murderers (such women exist: I’ve interviewed many of them for my Killer Women crime series) and so every woman has to be taught how not to be those things, all hell would break loose and rightly so.

As always with this kind of furore, the joy of radical feminists on social media at such man-hating nonsense is only matched by the pitiful hypocrisy of certain men racing to virtue-signal their support for them and lambast any man like me who objects.

To sum up this hypocrisy, I received a tweet today from a man named Jeffrey Reddick.

Fine words from a man desperate for women to think he’s on THEIR side against supposedly horrible toxic masculine men like ME.

Well yes, until you realise this is the same Jeffrey Reddick who boasts on his Twitter profile that he makes ‘scary movies’.

Oh, he certainly does!

I wonder if that’s what Jeffrey thinks ‘real men’ should be doing to cement their caring, sharing, sensitive, female-friendly credentials?

He’s not the biggest hypocrite here, though.

There’s only one thing Gillette really wants to achieve with this new campaign, and that’s to emasculate the very men it has spent 30 years persuading to be masculine.

As one male customer’s Twitter response, that quickly went viral, said: ‘Just used a Gillette razor blade to cut off my testicles. No more toxic masculinity for me. Thanks Gillette!’

He was not alone in his fury. 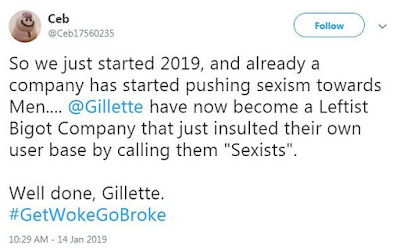 The YouTube version of the ad has been watched millions of times but attracted ten times as many ‘dislikes’ as ‘likes’, fast turning ‘Believe’ into one of the least popular commercials in US history.

Gillette – which believes so much in women’s rights that it has just two women on its board of nine directors - thought it was being clever by tapping into the radical feminist assault on men and masculinity.

In fact, it was being unutterably dumb.

By telling its male customers we’re basically all a bunch of uneducated, vile, sexist, harassing predators, they’ve jumped the shark in an unforgivable way.

I for one won’t use Gillette razors again until they withdraw this terrible commercial and formally apologise for their man-hating bullsh*t.

I suspect I am not alone.