Trump wall - all you need to know about US border

A standoff over funding for President Donald Trump's long-promised border wall has resulted in the longest-ever shutdown of the US government.

Mr Trump argues $5.7bn (£4.5bn) is needed to address a "humanitarian and security crisis" at the southern border and has warned the shutdown will continue until he gets the cash. 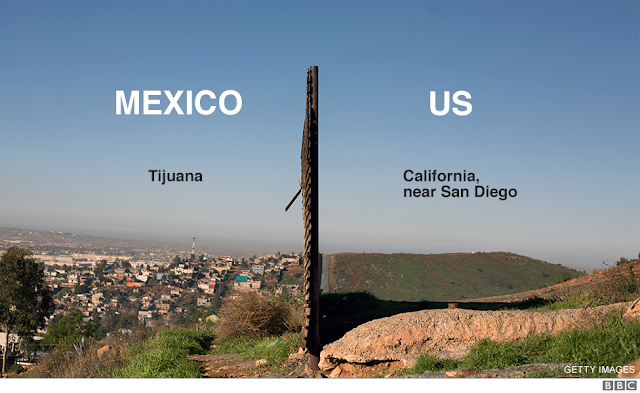 Democrats say the wall is a waste of taxpayers' money and accuse the Trump administration of creating a "manufactured crisis".

Here are seven charts and maps that try to explain where we are with the wall and what the situation is like at the US-Mexico border.

1. Trump hasn't built very much of his wall
Before Mr Trump took office, there were 654 miles (just over 1,000km) of barrier along the southern border - made up of 354 miles of barriers to stop pedestrians and 300 miles of anti-vehicle fencing.

In the run-up to the 2016 presidential election, Mr Trump promised to build a wall along the border's entire 2,000-mile length.

He later clarified that it would only cover half of that - with nature, such as mountains and rivers, helping to take care of the rest.

But, since Mr Trump entered the White House, although some of the already existing barriers have been replaced, no construction on any extension to the wall has yet been started.

Overall, Congress has so far approved $1.7bn in funding for 124 miles of new and replacement barrier since Mr Trump entered the White House.

The first construction on any extension to the existing structures - what could be termed new barrier - will start in February in the Rio Grande Valley, Texas.

The twin projects will cover a total of 14 miles - one barrier stretching six miles and the other eight miles.

Despite Mr Trump's continued determination to see a wall along the border, a survey this month by the Pew Research Center suggests the majority of Americans - 58% - oppose substantially expanding it, while 40% support it.

2. No-one really knows how much it would cost
A number of widely different estimates for a concrete wall have been put forward by official and unofficial bodies - ranging from $12bn to $70bn. 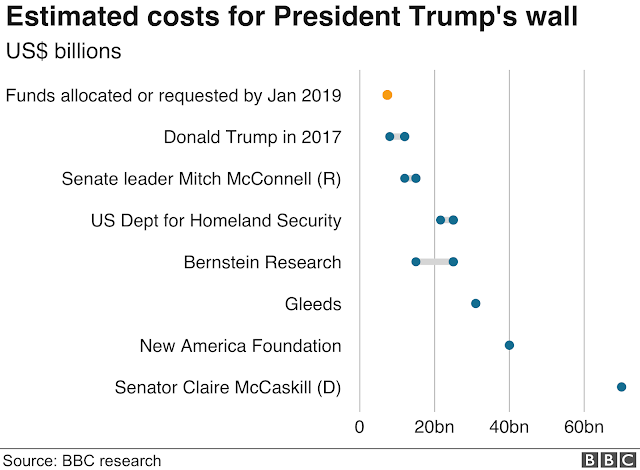 Mr Trump's initial price tag of between $8bn and $12bn (£6.4bn and £9.7bn) for a wall covering half the length of the border was widely disputed.

The 650 miles of fencing built under President George W Bush cost an estimated $7bn, and it could not be described as fulfilling Mr Trump's promises of a "tall, powerful, beautiful" barrier.

However, Mr Trump is now asking for $5.7bn in addition to the $1.7bn already allocated for new and replacement barriers.

The Department of Homeland Security (DHS) previously estimated a wall spanning half the border would cost up to $25m, but it has now said it is still looking at options to determine the price tag.

US Customs and Border Protection (CPB) says that, on average, it costs approximately $6.5m per mile to construct a new border wall or replace existing legacy fence.

3. Trump wanted concrete, but is now talking about steel
Mr Trump has changed his view of what constitutes a wall.

His promise to build a "big, beautiful wall" between the US and Mexico was a rallying cry throughout his election campaign. And early on, when he described it, he talked about concrete.

But once elected, he began talking about a barrier made of steel, so that border agents could see through it.

And in October 2017, when the Trump administration revealed eight 30ft-tall wall prototypes - they were a combination of concrete and metal. 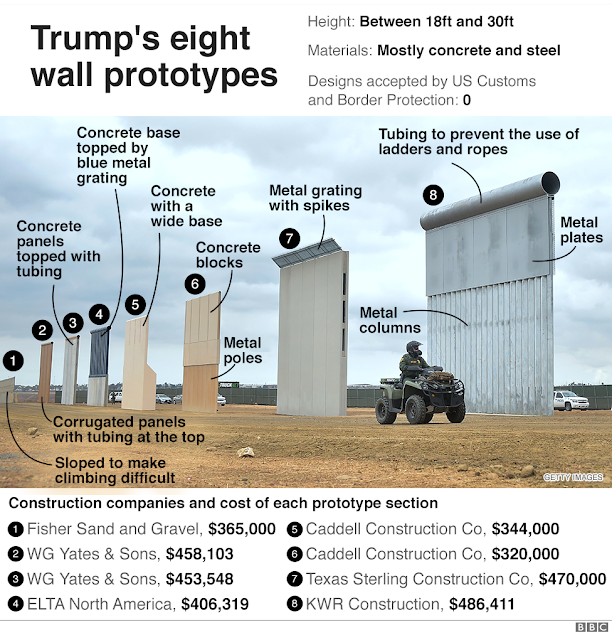 Since December, Mr Trump has said he does not want to build a concrete wall at all, but instead wants "artistically-designed steel slats".

And just before the government shutdown, he tweeted an image of the design of his "steel slat barrier", which he said was "totally effective while at the same time beautiful".

A design of our Steel Slat Barrier which is totally effective while at the same time beautiful! pic.twitter.com/sGltXh0cu9
— Donald J. Trump (@realDonaldTrump) 21 December 2018

Officials at the US Customs and Border Protection agency have said none of the Trump administration prototypes tested in 2017 met its operational requirements.

However, they did provide "valuable data" to help select design elements in the future, they added.

4. The number of apprehensions at the southern border has declined over time
Mr Trump said in a national address in early January that a wall was needed to stem a "growing humanitarian and security crisis at our southern border", involving "thousands of illegal immigrants".

However, figures show that illegal border crossings have seen an overall decline since 2000. 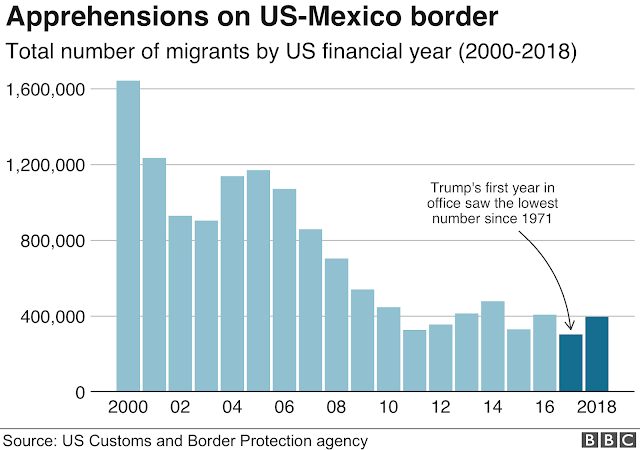 Every congressperson along southern border opposes the border wall, arguing it would not improve security.

"I think building a concrete structure sea to shining sea is the most expensive and least effective way to do border security," said Republican Will Hurd, who represents more of the southern border than any other member of Congress. 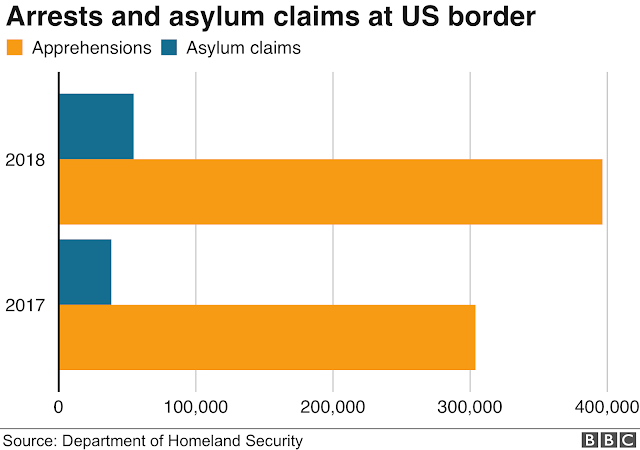 Among these groups were a rising number of families fleeing violence in Central America and surrendering themselves to US authorities at the border. Many have told officials that they fear returning to their home countries.

Some have blamed the decision to slash the number of refugees allowed into the US under the Refugee Admissions Program for the rise in such claims for asylum at the border.

To apply for refugee status in the US, foreign nationals must obtain permission to enter the country before travelling, but those arriving at the US border are able to claim asylum "defensively" to prevent them from being deported back to a situation of "credible fear".

Such claims are then referred to the Asylum Officers of the US Citizenship and Immigration Services.

And despite Mr Trump's claims, any new border barrier is unlikely to stop these migrants legally claiming asylum at a port of entry.

While almost 400,000 people were apprehended trying to cross the southern border illegally last year, more than 700,000 people who entered the US legally overstayed their expected departure date in 2018, according to the DHS. 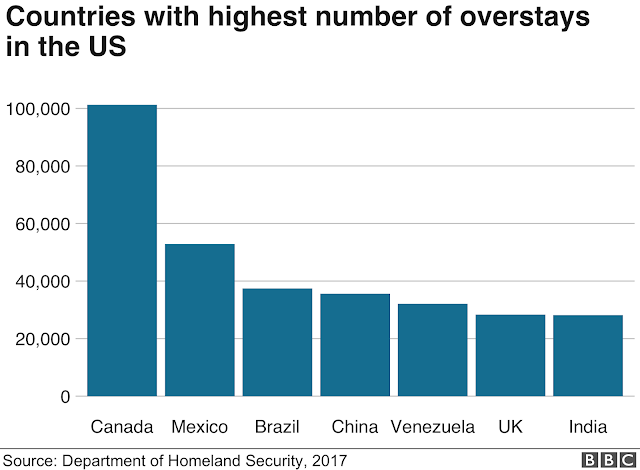 Canadians were the highest group of overstayers, according to DHS figures, followed by Mexicans and Brazilians.

Although the number of overstayers overall dropped to around 420,000 in May 2018 - it was still more than the number of people arrested trying to enter illegally via the Mexico-US border.

7. The wall is unlikely to stop drugs coming into the US
Mr Trump has claimed 90% of heroin comes across the southern border and that a wall would help the fight against drugs.

Nationwide heroin seizures reached 7,979kg in 2017, with 39% seized at the US-Mexico border, according to the Drug Enforcement Agency (DEA). 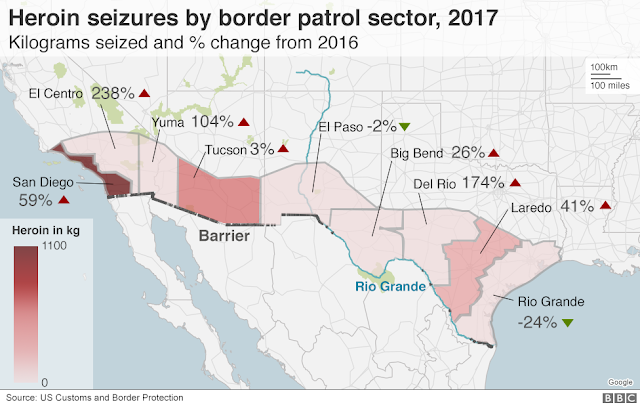 Most of the border seizures were in the San Diego corridor - approximately 1,073kg in 2017, a 59% increase on the previous year.

While most of the heroin in the US does come from Mexico, the DEA says the majority of it is smuggled in through legal ports of entry, hidden in privately-owned vehicles or transporter lorries, mixed with other goods.

Only a small percentage of the heroin seizures were between entry points - where barriers exist or are proposed.

In fact, there are already barriers in border patrol sectors with the highest volumes of heroin seizures.