Kumbh Mela: How to find someone lost at the world's biggest gathering

The ongoing Kumbh Mela festival in the northern Indian city of Allahabad (recently re-named Prayagraj) is billed as the largest gathering of humanity on earth, with 110 million people expected to attend over 49 days. But for the thousands who get lost among the crowds, help is at hand. The BBC's Geeta Pandey spent a day at the lost and found centres.

"Most people we get are elderly, mostly women above 60 years," says Umesh Tiwari who heads the Bhule Bhatke Shivir (lost and found camp), run by local charity Bharat Seva Dal.

Allahabad's oldest, this camp was set up by his father Raja Ram Tiwari in 1946 and has since helped reunite more than 1.5 million families.

At the entrance, a policeman writes down the details of the new arrivals in a register - their names, addresses, where they came from, any details of who to contact. 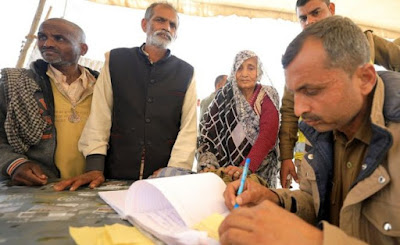 Inside, dozens of people who've been separated from friends or family are waiting anxiously. Some are sitting on rope cots inside the compound while others squat on the ground outside in the sun.

The atmosphere is fraught with tension. Anxious hours have been spent worrying over the fate of a loved one. There are tears and pleading voices: "Please announce my name [on the public address system] one more time."

'We got lost on the way to the bathroom'
Among them is a 35-year-old woman (who doesn't want to be named) with her eight-year-old daughter. The child is wrapped in a blanket because when they came in, she had no clothes on. "My husband and son had bathed and I accompanied my daughter to the bathroom. When we returned, we couldn't find them," she tells me.

Pilgrims at the mela bathe at the Sangam - the confluence of the Ganges, the Yamuna and the mythical Saraswati rivers. Hindus believe that doing so will cleanse them of their sins and help them attain "moksha", setting them free from the cycle of birth and death.

"We asked around and reached this place at 11am," says the woman. "We've been waiting here for several hours now and don't know what to do."

Her mobile phone, her handbag, everything is with her husband. The mother and the daughter don't remember any phone numbers and are uncertain how to find their way back home.

Some oversized clothes have been found to dress the child and repeated announcements have been made, but so far no one has come for them.

Mr Tiwari offers to give them money for bus fare, but they're not keen to travel after dark. "There's no last mile connectivity where I live. How will we reach home safely?" the woman asks. Mr Tiwari says they can stay the night in the tents at the camp.

As she sits fretting, weighing her options, one of the staff members comes in to say that her husband has arrived. Looking visibly relieved, the couple leave along with their daughter.

"On some days, the crowds are so thick that people easily get disoriented. We've received 560 people at our centre since the morning and 510 have been reunited with their families," Mr Tiwari says.

As dusk falls, the wait continues for the others. Among them is an elderly man who was separated from his wife in the morning. "Where is she now? Would she have had something to eat? She has no telephone and no money," he says, wiping away a tear.

"People think what could go wrong? But when adversity strikes, everything does and you can't do anything," says Mr Tiwari.

They have 25 volunteers who fan out across the mela grounds and bring in any one who appears lost. "It's god's will to separate or reunite people, my calling is to serve them. These people, the lost ones, are my god."

'No-one knows my real name'
A couple of minutes of walk from the Bhule Bhatke Camp is the brightly-lit Khoya Paya Kendra (Lost and Found Centre), run by the police. When I visit the centre at midday, it's a hive of activity.

The registration counters are staffed by volunteers - mostly young men and women - who take down the details of the missing in their computers. Some of the volunteers who have come from outside the state are struggling to understand the local dialect and have little understanding of the cultural nuances.
At one counter, a volunteer asks a 60-year-old woman, who's been separated from her group, her name so she can fill up a form.

"Ram Bisal ki amma (Ram Bisal's mother)," she responds. The volunteer is perplexed. "I don't need to know your son's name, I need your name," she repeats. The woman says no-one knows her real name, but when the volunteer insists, she reluctantly says it's Sarsuti Devi Maurya.

Sarsuti Devi says she is visiting the fair with five of her neighbours from her village. She got separated from the group at the Sangam. She landed up at the centre after trying to search for them on her own for an hour. Though she is able to name two of the men in the group, she has no telephone numbers to share.

Many others waiting to be reunited with their friends and families have similar profiles - they are elderly, with little or no education, and remember no telephone numbers. Many are not even sure about details of where they've come from. Most can name their villages but many are unsure about the districts.

Sarsuti Devi is lucky - while her case is being registered, two young men also trying to register a missing person report at another nearby counter spot her. They are, in fact, there to find her.

Relief is visible on their faces as they all start talking at the same time. "We were afraid something had happened to her. She's our neighbour in the village. How would we go back and show our faces?" said Parvesh Yadav.

Within minutes, Shyamkali, an older woman, joins the group. The two women are relieved to see each other, but they are also upset - Shyamkali thinks Sarsuti Devi was being overconfident and adventurous in going to the river alone, while the latter blames the others for being careless enough to lose her. But soon, they are hugging each other.

Meanwhile, a constant stream of arrivals is keeping the volunteers busy. Although most people who get separated are reunited, a handful of stories don't have happy endings.

Several hours after Nokha Devi walked into a lost and found centre, the volunteers are still unable to prise any information from her. She looks troubled and is unable to answer questions.

"If no one comes for her in the next 12 hours, we'll hand her over to the police and she will be taken to a shelter for destitute people," says one of the volunteers.

'What will we tell her family if we can't find her?'
While I'm hanging around, listening to stories of people, two elderly women come up to me with a small scrap of paper. Two names are scribbled on it with mobile numbers in Hindi.

"Can you please call them to check if my friend is at our camp?" one of them asks.

Her name, she tells me in Gujarati, is Prabha Ben Patel. She's from the western city of Ahmedabad and she is visiting with two friends.

"We bathed in the holy waters and went to visit a temple nearby where we lost our friend," she says.

It's hard not to get involved. The women are anxious. "What will we tell her family if we can't find her?" she asks me.

I call one of the numbers and once it's answered, I hand over the phone to Prabha Ben. She explains the situation and hangs up.

A couple of moments later, my phone rings. At the other end is a woman, speaking excitedly. I hand back the phone to Prabha Ben.

She's finally relaxed. And smiling. Her friend is alright and has turned up at the camp.

Next door to the Bhule Bhatke Shivir is a camp exclusively for women and children. Also run by a local charity, the Hemvati Nandan Bahuguna Smriti Samiti camp has been running since 1956.

Its manager Sant Prasad Pandey tells me they have reunited 950 people since the morning and that 15 people are still waiting to hear from their families.

"We are providing food, clothes and blankets to those waiting here. And for those who can travel on their own - we are buying them tickets or giving them money to travel home."

Mr Pandey says they have more than 100 volunteers covering the 32 sq km festival ground and that they have been told to especially keep an ear out for children who are wandering around alone, crying, and bring them in.

"It's been more than an hour since we lost her," she says, crying. "We looked for her everywhere and then came here to make announcements about her. I hope someone will find her and bring her here." Her sister tries to console her.

Mr Pandey tells her that the police at the centre are in touch with the other two centres and that they will let her know as soon as they receive any information about her daughter.

Soon, information arrives that a child matching Radhika's description has been brought to the nearby police-run camp.

When Sandhya and her sister arrive at the other camp, a policewoman is holding Radhika. The police ask the child if she recognises Sandhya. "Yes, it's mummy," she says.

But first, there are formalities to be completed. The girl is handed over after police are satisfied that Sandhya is who she says she is and not a child trafficker.

"The police told us that an old man found her miles away from here and brought her to them," says Sandhya.

Radhika says "the uncle" who found her and the "police uncles" were nice and that they bought her treats.

"We were crying our eyes out, she was happy," Sandhya says. The tears have been replaced by joyful smiles as they pose for photographs.

It's a story that has ended well. 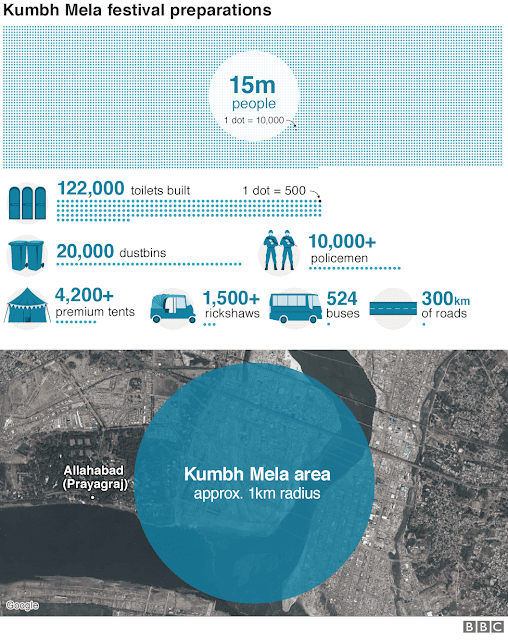 Kumbh Mela at a glance