All right, this particular canard has had all its feathers pulled off many times. I claim no originality. People explain it over and over on blogs. Every twenty seconds, somebody asks about it, and the explainers go to work.

The “quote” goes like this:
And Alexander wept, seeing as he had no more worlds to conquer.

“Alexander” is, of course, Alexander the Great, king of Macedon in the fourth century BC. A legend in his own time, et cetera, he died in his early thirties, et cetera, having won many battles. The quote is poetic. It touches a theme dear to everyone’s heart: the Tears of the Monster. However! From time to time, some bright person is forced by the laws of physics to ask: “In what ancient text does that passage appear?” Answer: it appears nowhere.
Remember Die Hard? I don’t. I saw it right around the time it came out, and all I remember is Bruce Willis, barefoot, running through broken glass. That, for me, was a metaphor for watching the movie.

Fans of the film, however, will recall its dapper German villain, Hans Gruber, smacking his silly lips and gloating at some private victory. He puts his fingertips together and says in facetiously tragic tones (clearly quoting something from High Culture and referring with cozy irony to himself): “And Alexander wept, seeing as he had no more worlds to conquer.” Then he smiles with evil-genius self-satisfaction and says: “Benefits of a classical education.”

Yeah. Except that quote would never come up in the context of a classical education, unless the instructor happened to be taking a jolly detour, nose in the air, to attack a piece of legendary crap that no student of his must ever traffic in. And even I, right now, have been forced to attach weights to my own nose to prevent its springing upward. (I can’t stop its sniffing though. There it goes again: sniff.)
A few facts. The monkeys who wrote Die Hard did not invent that quote. (And let me tell ya something: the people who write the scripts for action movies are literally forbidden to invent anything. Their mandate is to regift whatever is known to have worked in the past. More on this another day.) The quote, I was saying, is very old. It comes up in certain classic English poems from the seventeenth century. For example, here’s Edmund Waller addressing Oliver Cromwell in 1655:

When for more worlds the Macedonian cried,
He wist not Thetis in her lap did hide
Another yet, a world reserved for you
To make more great than that he did subdue …
—“A Panegyric to My Lord Protector,” lines 73–6

There it is. And a quick Google search turned up an even earlier item, printed in medieval Canada (1628, I mean).

But—and here’s where it gets good—but, nobody seems to have located any citation of the quote earlier than 1628. My homely contribution to this fuss is my hypothesis as to why instances of the quote are unlikely to turn up before 1579.

The quote is a hash of three passages in Plutarch, first century CE. Two of the passages were made available to English speakers (most notably Shakespeare) in 1579, in the translation by Thomas North. The other passage has a more complicated history. Let’s actually start with the tricky one.

Exhibit 1. [Orthography in all these quotations sic]
It is reported that King Alexander the Great, hearing Anaxarchus the philosopher discoursing and maintaining this position: That there were worlds innumerable: fell a-weeping: and when his friends and familiars about him asked what he ailed. Have I not (quoth he) good cause to weep, that being as there are an infinite number of worlds, I am not yet the lord of one?

That’s not from Plutarch’s Life of Alexander. It’s from Plutarch’s essays, usually called the Moralia. The essay in particular is called “On Tranquillity of Mind.” The translation above is that of Philemon Holland, 1603. This was not the first translation of that essay into English, but it might as well have been. The others all sank like stones; nobody ever heard of ’em. Look at this rather nicer version by everybody’s favorite courtier, Sir Thomas Wyatt:
Alexander, whan he herde Anaxarchus argue that there were infynite worldes, it is said that he wept. And whan his frendes asked hym what thing had happened him to be wept for: “Is it nat to be wept for,” quod he, “syns they say there be infynite worldes, and we are nat yet lorde of one?”

The above was done in 1527 at the request (sort of; she actually asked for a different book) of Catherine of Aragon. If you know who that is. 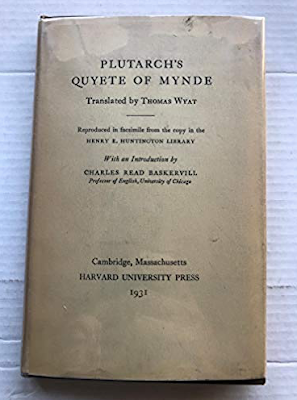 At any rate, the passage is crystal clear in both cases: Alexander is not weeping in sorrow that there are no more throats to cut. This is not a picture of a man at the end of a career of world conquest; he’s at the beginning. “Look at all these throats—and I haven’t even cut one!”

Exhibit 2.
For when they brought him [= Alexander, still a boy] newes that his father had taken some famous city, or had won some great battell, he was nothing glad to hear it, but would say to his playfellowes: Sirs, my father will have all, I shall have nothing left me to conquer with you, that shall be ought worth. For he delighting neither in pleasure nor riches, but only in valliantnes and honor, thought, that the greater conquests and realmes his father should leave him, the lesse he should have to do for himselfe. And therfore, seing that his fathers dominions and Empire increased dayly more and more, perceiving all occasion taken from him to do any great attempt: he desired no riches nor pleasure but warres and battells, and aspired to a signory, where he might win honor.

Now that’s from Plutarch’s Life of Alexander. No tears, but definitely the guy Gruber had in mind, the Godzilla he’d heard about in German day camp. Here’s a prince who wants to conquer for the sake of conquering; he doesn’t care whether Macedon comes out on top or not, except insofar as it’s compatible with his personal glory. (You could at least imagine this guy crying, if there were no more worlds to conquer.)

Our final passage is from Plutarch’s Life of Julius Cæsar.

Exhibit 3.
An other time also when he was in Spayne, reading the history of Alexanders actes, when he had red it, he was sorrowfull a good while after, and then burst out in weeping. His frends seeing that, marveled what should be the cause of his sorow. He aunswered them, Doe ye not thinke sayd he, that I have good cause to be heavie, when king Alexander being no older than my selfe is now, had in old time wonne so many nations and contries: and that I hitherunto have done nothing worthy of my selfe?

Tears! Indeed, it’s pretty much the same thing as Exhibit 1. 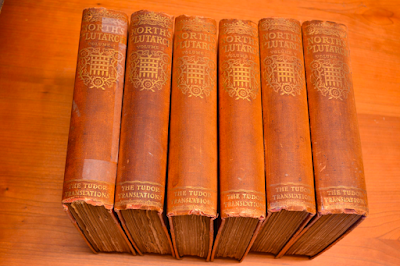 Like all Elizabethan translations, it seems pretty clotted and inelegant to me, but y’know, Shakespeare is Shakespeare, and what was good enough for him, et cetera. Indeed, he does quote North verbatim in places, just like he did with Florio’s Montaigne.

But you see what’s happening here. I’m setting out on the table all the ingredients for Gruber’s quote. In no case does Alexander weep because he’s accidentally put himself out of business by making himself king of the world. And it makes sense that he would not weep about such, because in point of fact he did not take over the world. He hits a wall in India, see. His men are tired, the river is deep, he can’t swim. Across the river: some vast Indian army, refreshed and ready. Alexander’s guys beg him to call it a day. “Call it a day, call it a campaign, call it an empire. Anyhow let’s go home.” And for once, Mr. Won’t-Listen-to-Anybody says okay. It’s all in the Life of Alexander. Read it sometime. Seventy pages of modern English, it’s not gonna kill ya.

But back to Gruber. What’s surely happened is some specially eloquent seventeenth-century British smarty-pants read the North and Holland translations, misremembered ’em, and created the mot that’s been repeated ever since.

How do I know the person didn’t misremember the original Greek? I don’t. But think about it. No one could read Greek, not even North (he was translating from Amyot’s French). Besides! is it not remarkable that the earliest instances of the Gruber version happen to crop up a few years after those important translations into English?

Here’s what would settle the matter against me: cases of the Gruber version from languages other than English, occurring before 1579. If anyone reading this can show me such, I promise to write another piece on this same topic, giving you full credit.

Alexander’s heart had an insatiable longing for glory. When his friend Anaxarchus told him, following the authority of his teacher Democritus, that there were innumerable worlds, Alexander said, “Alas, poor me, because so far I have not even gained possession of one!” To possess the world was too inglorious for this man, though the world is great enough to serve as the home of all the gods.
—from Book 8, Chapter 14 “The Desire for Glory,” Foreign Stories: section 2. [Translation Henry John Walker, 2004.]

That passage was written fifteen years before Plutarch was born; indeed, it might have been where he got it (?). And since it’s in Latin—and worse, in a frickin’ handbook of memorable sayings—anybody could have read it and misremembered it at any point in European history.

Okay, but then why do all these Gruber versions suddenly pop up in early seventeenth-century English, hmmm? I’m tellin’ ya: some Englishman started this. Some English Gruber. We’ll call him “John Miner.”

Unless even Miner didn’t invent it, but some Frenchman. Anyhow, I give up. My men are done. The river is deep. Call it an empire. Let’s go home.