But chief medical officer warns it is too early to lift lockdown, with ministers expected to extend restrictions to 7 May

Britain appears to be reaching the peak of the coronavirus outbreak, with signs that the numbers of new cases are flattening off, experts have said.

But chief medical officer Chris Whitty left no doubt that it is too soon to lift lockdown restrictions on social activities without risking a renewed flare-up of the deadly virus.

Ministers are expected to extend the restrictions until 7 May at a virtual meeting of the Cobra emergencies committee on Thursday, when they will be briefed by Prof Whitty and chief scientific adviser Sir Patrick Vallance. Northern Ireland’s devolved executive has already decided the province will stay in lockdown to 9 May. 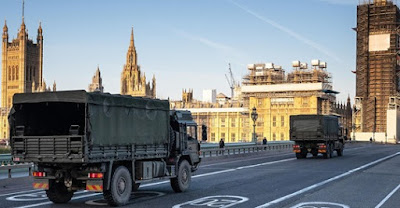 Prof Whitty told the daily press conference at 10 Downing Street on Wednesday that the outbreak was “probably reaching the peak overall” in the UK.

But health secretary Matt Hancock poured cold water on any hopes of an easing in restrictions, telling the conference: “The clear message is that it is too early to make changes and therefore the message to the public is that everybody can play their part by staying at home, which protects the NHS and saves lives.

“Of course I understand there is a broad discussion about what next, but we are very clear about the things people need to do now.”

Angela McLean, deputy scientific adviser, gave the first indication that the lockdown will be lifted simultaneously across the UK, rather than being phased out according to regional variations in the progress of the outbreak.

“What we would expect to happen is the peak to be at the same time across the country, because the way we changed our behaviour in the country was largely speaking the same everywhere,” said Prof McLean.

Prof McLean pointed to “encouraging” signs that the daily numbers of new cases of Covid-19 had remained relatively steady for almost two weeks since peaking above 6,000 on 5 April, in marked contrast to swift rises in the weeks before.

Numbers of hospital beds occupied by coronavirus patients fell by 1 per cent across the country and by 5 per cent in Greater London over the past 24 hours, she said.

“What I see here is evidence that everybody’s efforts to stay home and not have as much contact with other people as would be normal is having the impact we hoped it would have and bringing this epidemic to a much better trajectory where this is currently flat and no longer rising,” she said.

Prof Whitty cautioned that high numbers of deaths would continue for some time after new cases begin to decline. And he warned that the knock-on effect of delays in reporting cases over the four-day Easter weekend could cause an upwards spike in deaths on Thursday.

“We do all think that this has flattened out,” said the chief medical officer.

“But sadly we do think that high numbers of deaths will continue for a short while on from where we are at the moment.

“At the moment we are not yet at the point where we can say confidently and safely this is now past the peak and we can start thinking very much about the next phases.”

Ministers have been resisting calls from Sir Keir Starmer to set out how they intend to relax restrictions once it is safe to do so.

In a letter to foreign secretary Dominic Raab, the Labour leader said that “to maintain morale and hope, people need a sense of what comes next”.

But Mr Hancock showed concern that any public discussion of relaxed restrictions might encourage people to abandon social-distancing efforts prematurely.

In an apparent acknowledgement that the government sent out mixed signals early in the outbreak – when Boris Johnson was criticised for saying he was continuing to shake people’s hands and planned to visit his mother – Mr Hancock said: “One of the things that I think we have learnt during this crisis is that the clarity of the guidance to the public is incredibly important.”

With Mr Johnson continuing to recuperate from coronavirus at his country residence of Chequers, Mr Raab will chair the crucial Cobra meeting, which will involve leaders of the devolved administrations as well as senior ministers and advisers.

The meeting will follow a virtual cabinet, also led by the foreign secretary. Mr Raab is expected to announce the decision on the lockdown extension at the daily press conference in No 10 around 5pm.