'This is no longer possible to hide,' witness says

As Russia struggles with an escalating coronavirus crisis, videos and images posted online have shown long queues of ambulances apparently waiting to get access to hospitals in the Moscow region.

Footage shot from a Moscow tower block and posted on Twitter on Friday showed more than 50 emergency service vehicles queueing around the block.

Another user shared street-level footage of what appeared to be the same stretch of ambulances. They said it was filmed outside a hospital on Startovaya Street, in the Losinoostrovsky district of the Russian capital.

"The picture is terrifying. This is no longer possible to hide," the user tweeted. 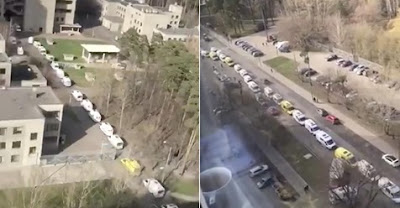 The queue was reportedly the result of a logistical error, with patients being sent there when no beds were actually available.

Russia reported 2,186 new coronavirus cases on Sunday, bringing the national tally of confirmed cases to 15,770, even as Moscow and many other regions neared the end of their second week in a state of lockdown aimed at halting the contagion.

The number of coronavirus-related deaths in the country rose by 24 to 130, the Russian coronavirus crisis response centre said.

In Moscow – the centre of the national outbreak – the number of patients being hospitalised has also doubled in recent days, one official said.

“I can tell you for sure that there has been no peak yet whatsoever. We are at the foothills of the peak, not even in the middle,” Moscow's mayor, Sergei Sobyanin, said in an interview with Russia's RIA news agency published on Friday.

“I can only say that a serious test lies before us and we need to be preparing for it,” he said.

In a Facebook post, a man claiming to be an ambulance worker posted images showing queues of emergency service vehicles outside what he said was a hospital in Novogorsk, another Moscow suburb.

"Today I work on an ambulance on a night shift," Oleg Pyhtin said. "A patient was brought from Mitino to a hospital in Novogorsk, apparently in Moscow there is nowhere. I have not seen this in six years! Standing in line."

In a televised address on Friday, Mr Sobyanin said the city would gradually begin introducing a system of passes for residents wanting to move around the city so that authorities could enforce the shutdown.

Residents in Moscow have been told to stay at home unless they need to make essential trips to buy food or access urgent medical care. Police said on Thursday they had already caught 400 people ignoring the order and that they faced small fines.

“The situation started to get worse from Monday. The number of seriously ill patients with pneumonia is growing,” Mr Sobyanin said, adding that he felt he had “no choice” but to introduce a permit system.

“Especially when we see that unfortunately not everyone is following the restrictions that have been set.”

Scene outside a Moscow hospital earlier. The queues of ambulances reportedly the result a logistical error — patients sent when there weren’t actually the beds available. But mayor’s office themselves admit hospitals in capital working near capacity. pic.twitter.com/GlddUm2OAr
— Oliver Carroll (@olliecarroll) April 10, 2020

In Moscow, the influx of patients is already pushing hospitals and ambulances towards their limit, said deputy mayor Anastasiya Rakova.

Russia recorded far fewer cases of the new coronavirus than many Western European countries in the early stages of the outbreak, but its official case tally began to rise sharply this month.

Officials until late last month were saying that the situation was under control and that there was no epidemic.
Their tone changed however after Mr Sobyanin, who has taken a prominent role in the crisis, questioned the veracity of official figures and said the real situation was much worse than it looked.

Some anti-Kremlin politicians have criticised President Vladimir Putin for taking what they say has been too low a profile in the push to contain and slow the spread of the virus.

The Kremlin has rejected those assertions however, and Mr Putin made his third television appearance dedicated to the crisis on Wednesday, rolling out economic measures to help businesses hit by the lockdown.