After Delhi-based actor Suraj Sharma was cast to play the 16-year-old Indian boy (Suraj was 19 when the film was released) from the nearly 3,000 auditions, Ang and his casting agents started to look for an actor to play the adult Pi. Irrfan’s name was on top of the list. For one thing, he was taller than Suraj, and that made sense to Ang. The director had already seen Irrfan in Slumdog Millionaire, The Namesake (2006) and A Mighty Heart (2007).
‘There were only a couple of actors to choose from in India and he was the top choice,’ Ang says. ‘Obviously I wanted to make an international film, but I also chose him for his good acting. It wasn’t like I had a list of five people to choose from. And his height was working.’ Ang cast another fine Indian actor, Adil Hussain, as younger Pi’s father. Tabu played Pi’s mother. Although the two played mother and son in the film, Tabu and Irrfan did not share any screen time.

Ang says that Life of Pi was ‘unfilmable’ for several reasons, but especially because it challenges the notion of narration. Irrfan’s Pi starts the film with a voiceover, giving the narrative a first person feeling. But much of the narration is also in third person, as we see the actual action taking place with the younger Pi and his lifeboat mate, Richard Parker, the CGI-created tiger. And Irrfan’s toughest task was to wrap up the movie emotionally, Ang adds.

The story that Pi narrates actually forms two narratives—and it is for the audience to believe in one of the two stories. ‘Irrfan had to emotionally develop his character and also grasp, both the philosophical way of the narration and also the trickster kind of a narrator,’ Ang says. And he adds, ‘I told Irrfan that Pi is bullshitting. Because it is tricky to believe in either of the stories. And the question that is asked—‘Which story do you prefer, not like?’—also makes one think.

Irrfan also had to match the innocence of the younger Pi, played by Suraj Sharma, and develop the cynical tone of an adult. ‘People might believe this way or that way,’ Ang says. ‘It has to be right on the edge where it would work for everybody. You can have two versions of the story and they all can debate, make sense. That was the most difficult task, other than creating a tiger in the ocean digitally.’

When the film’s shoot started, Irrfan went to Taiwan. But then Ang and his crew went off to shoot in India and returned to Taiwan to recreate the scenes of the lifeboat lost on the sea. Irrfan returned to Taiwan many months later to shoot the interior Montreal scenes. And later, the crew travelled to Montreal to wrap up the exterior scenes of the film. ‘He had not seen what we had shot and he would not see it until a year later when the film was finished, because a lot of it was going to be digital,’ Ang says. ‘And even I didn’t know how the digital scenes would shape up. I was just guessing. I told him what I had in my mind. I described the story, the pictures, how we were planning to shoot the rest of the film.’

Then came the key scene when Irrfan’s Pi talked about the lifeboat landing on the stranded beach and an emaciated Richard Parker walking away without looking back to say goodbye to his boat mate.

Scene from "LIFE OF PI"

"I suppose in the end, the whole of life becomes an act of letting go, but what always hurts the most is not taking a moment to say goodbye"

‘I was certain he was going to look back at me, flatten his ears to his head, growl,’ Irrfan’s Pi says in a voiceover, a long monologue, as he narrates his story to a writer, portraying Yann Martel, and played by the British actor Rafe Spall. ‘That he would bring our relationship to an end in some way. But he just stared ahead into the jungle. (By now the camera is on Irrfan’s face.) And then Richard Parker, my fierce companion, the terrible one who kept me alive, disappeared forever from my life.’ Then he adds, ‘I wept like a child. Not because I was overwhelmed having survived, although I was. I was weeping because Richard Parker left me so unceremoniously. It broke my heart.’

It is an emotionally devastating speech and Irrfan actually broke down, crying with tears rolling down his eyes, and it happened twice. Ang says he did not demand the tears from Irrfan. He simply explained the emotions, the background and how he felt thinking about the scene. ‘With actors I just want to see the results,’ he says. ‘I don’t care how they pull it off. What experience they use, they can keep that to themselves. But that was the effect I wanted, what the speech meant to me.’

Despite Irrfan’s fine acting, Ang Lee had to struggle with one concern—that the Indian actor mumbles while saying long dialogues. But Irrfan is not alone, he says, adding, ‘There are other great actors, Robert De Niro for instance, who mumble. It’s not that I couldn’t loop the voice. But it was a long dialogue so I just wanted to make sure that it was clear. He had to be understandable.’ 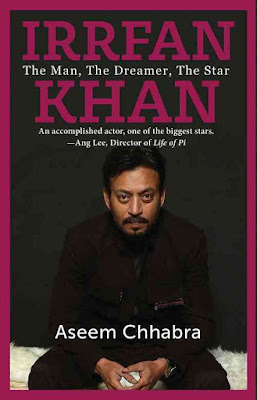 There was also the concern about Irrfan’s English accent. As the film progresses, Pi matures from the teenager on the lifeboat to an adult living in Montreal and how he speaks English also changes. The film’s production team got a Montreal English accent coach for Irrfan. But despite the coaching, Irrfan’s dialogues—emotionally moving as they are—sound like they are being spoken by a man who does not speak English with ease.

At least one admirer of Irrfan was honest enough to say so.

‘I was delighted he (Irrfan) got roles in Hollywood films,’ Naseeruddin Shah says. But Naseer is known to be opinionated, calling a spade a spade. ‘Only in Life of Pi I didn’t care for his performance because he tried to put on a Canadian accent and it didn’t work. Angrezi woh itni achee nahi bolta ke accent badal sake. (He does not speak English well enough to change his accent.) That’s what I told him and he accepted it.’

But Ang Lee will always be grateful to Irrfan for what he did in the film. ‘I thank him for that. It’s very inspiring for a lot of people around the world. His speech was a dream for a filmmaker. He should have been nominated. He should have gotten an award for that speech.’