Make no mistake: Agriculture alone has the potential to reboot the economy

Agriculture, food and trade policy expert Devinder Sharma writes: “My understanding is that only agriculture can reboot the economy, sustain millions of livelihoods, and reduce global warming.”

At a time when Nobel laureate Joseph Stiglitz says that neo-liberalism is ‘dead and buried’, and the world as a result is increasingly grappling with the gigantic problems of rising unemployment, gnawing inequality and climatic change reaching a tripping point, agriculture alone has the potential to reboot the economy.

While the accumulation of wealth in the western countries is essentially built on greenhouse gas emissions, as author Amitabh Ghosh would say, the former UN Secretary General Ban Ki-moon had the courage to acknowledge: “The world’s current economic model is an environmental suicide. Climate change is showing us that the old model is more than obsolete. We need a revolution on how best to make the global economy sustainable.”

His clarion call at the World Economic Forum 2011 however went unheeded. No media even thought of initiating a discussion on this grim portrayal of the global economic future. 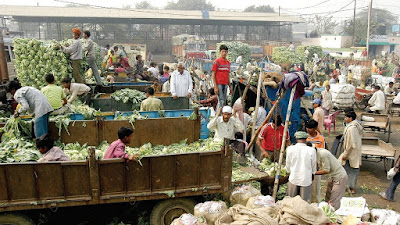 While the current economic model has outlived its utility, more of the same will only exacerbate the destruction of natural resources, advancing the climatic catastrophe the world is staring at, and lead to unimaginable socio-economic disruptions. Already with the Himalayas melting at an alarming rate, reducing the snow depth by one-and-a half feet every year, with river flow shrinking, lakes and water bodies disappearing; and with oceans polluted and rising, the environmental consequences of economic growth have been dastardly.

As if this is not enough, look at the environmental fallout of industrial agriculture. Soil fertility has declined to almost zero in intensively farmed regions; excessive mining of groundwater sucking aquifers dry; and chemical inputs, including pesticides, becoming extremely pervasive in environment, the entire food chain has been contaminated.

As soils become sick, forests are logged for expanding industrial farming, soil erosion and water depletion takes a heavy toll leading to more desertification. Not drawing any lessons, Brazil’s new president, Jair Bolsonaro, has launched an assault on the Amazon rainforests. Within hours of assuming office he issued an executive order that practically spells a death-knell for the pristine forests, considered to be a global lung.

In Punjab, the Chief Minister has time and again warned of creeping desertification if the present rate of ground water withdrawal is not corrected. A report by the Central Ground Water Board has warned that Punjab and Haryana will turn into a desert in another 25 years if it continues with the current rate of exploitation.

And yet I find expectations on economic reforms have risen significantly. In the second tenure of Prime Minister Narendra Modi, corporate-backed think tanks, credit rating agencies, and economic writers without exception have called for more reforms, going to the extent of seeking bold reforms.

HOW DID HIGHER GDP HELP ?
I fail to understand that if a higher GDP in the ten years of UPA-1 and UPA-2, an outcome of economic policies driven by the ideology of economic reforms, had failed to translate into jobs, how will aggressively pursuing more reforms create more jobs now. That’s a question no one wants to answer. More so at a time when we are fast moving from jobless to job-loss growth. Recent studies show that besides the urban centres, huge job losses have taken place for the rural farm and non-farm workers as well.

Similarly, the growing demand for reducing corporate tax to attract investments and provide jobs has come at a time when globally there is no empirical evidence for it. Just because the corporate bodies need it, credit rating agencies and think-tanks are going overboard justifying it. Nobel laureate Paul Krugman has in a tweet questioned this flawed thinking saying how wrong it was to imagine that slashing corporate taxes would lead to a huge surge in investments.

In a graph he tagged, sourcing the US Bureau of Economic Analysis, he showed clearly that there is no relation between corporate tax cuts and rising investments. Nor does it lead to more job creation. In fact, he further explains that the tax cuts had only enabled the rich to invest more in the stock markets.

Another bold reform that the industry associations are crying for is reforming the labour markets, which essentially means the privilege to ‘hire and fire’ workers. Again, Paul Krugman in a tweet said “basically very little evidence that we gain anything from the brutality of our labour markets”.

In simple words, the ‘brutal’ labour reforms in the US haven’t worked. If it didn’t work in the US, from where we copy and paste economic policies, I wonder how will the same labour reforms work in India.

This has to change. Not an easy task, but considering the realisation that agriculture needs structural reforms; I see a ray of hope.

DRIVING OUT PEOPLE FROM AGRICULTURE IS FOOLISH
In the given economic scenario, my understanding is that only agriculture can reboot the economy, sustain millions of livelihoods, and at the same time substantially reduce global warming.

The first and foremost requirement is to accept the yeoman role agriculture can play in revitalising the economy in the years to come. The economic thought that encourages farmers to be forced out of agriculture to the cities where cheaper labour is needed has to first change.

If agriculture becomes economically viable, the rural economy too undergoes a rapid transformation thereby drastically reducing the rural-urban migration. While the villages will become pivot of economic growth, the cities will be saved of a huge migratory influx protecting them from an impending collapse. With farming becoming viable, it will also reduce the pressure on creating more jobs in the cities. Agriculture therefore is the saviour.

Addressing the fifth meeting of the governing council of the Niti Aayog recently in New Delhi, the Prime Minister had announced the formation of a high-level task force for suggesting structural reforms in agriculture. This is a positive development, and if curated properly has the potential to propel the much needed agricultural transformation by the year 2024.

This requires fresh thinking, and banking on approaches that are ecologically sustainable and conform to the location-specific needs of the country.

For instance, the Prime Minister’s focus on water harvesting and conservation is driven by the desire to reactivate traditional water harvesting technologies, and make water conservation an important factor in farming strategies. Instead of intensive farming, the emphasis has to shift to agro-ecological farming systems requiring less water, with the focus diverted to local production, local procurement and local distribution.

What India needs is a series of desi reforms in agriculture, ensuring that growth in agriculture is so entwined with food policies that hunger and malnutrition is relegated to the past.Meanwhile, a high-level task force of chief ministers headed by Maharashtra Chief Minister Devendra Fadnavis has been formed.

The task force would do well if it does not copy the failed agricultural reforms from the United States and European Union. To illustrate, Indian economists are building up pressure to open up agriculture to foreign direct investment in multi-brand retail trade as well as in preparing the farm markets for commodity trading. If this had worked, I see no reason why the average farm income in the US should have nosedived in 2018.

The US Department of Agriculture (USDA) had estimated the ‘median’ farm income to be in the negative at minus $ 1,553 (or minus Rs 107,739). In other words, the average farm household in the US was living in debt, with the debt margin increasing substantially for half the households existing below the ‘median’.

In fact, the Chief Economist for USDA had admitted that real farm incomes have been declining since the 1960s, thereby necessitating huge farm subsidies to keep farming viable. This is happening at a time when the world’s biggest commodity trading centre, the Chicago Mercantile Exchange is located in the US, and the world’s biggest organised retail chain the US-based WalMart has completed more than half a century. But neither commodity trading nor the entry of private markets could rescue agriculture.

DIRECT INCOME SUPPORT IS WELCOME
To me, this is a great opportunity. The Prime Minister has already set the ball rolling when in the interim budget in February made a provision for providing a direct income support of Rs 6,000 per year to small farmers, which was extended later to all land-owning farmers.

In my understanding, it was a tectonic shift in economic thinking, moving away from ‘price policy’ to ‘income policy’. Gradually, I am sure the direct income support in the years to come will one day increase from Rs 500 a month to as much as Rs 5,000 a month. And I am hoping that PM-Kisan scheme is followed by setting up a National Commission for Farmers Income & Welfare, incorporating the existing Commission for Agricultural Costs and Prices (CACP), with the mandate to provide an assured income of Rs 18,000 per month per farming family. This has to be provided by way of topping-up on the average incomes in each of the districts. The date for assessing farm incomes district-wise is available.

Considering that the average farm income in 17 states of India or roughly half the country stands at a mere Rs 20,000 a year, the importance of direct income support can be easily gauged.

At the same time, public sector investment between 2007 and 2017 being in range of 0.4 per cent of GDP, the reason why agriculture is
faced with a terrible agrarian crisis becomes obvious. With low investment and low incomes, no miracles can be expected.

Agriculture therefore needs massive infrastructure investments, including expanding the existing APMC regulated markets infrastructure to reach 42,000 mandis in 5 kms radius, linking these mandis with a network of village link roads, strengthening the MSP delivery system, and providing for a network of godowns, food grain silos and warehouses. This has to be accompanied by formulating Ease of Doing Farming initiatives on the same lines as ease of doing business. Ease of Doing Farming will be a governance reform removing bottlenecks and hurdles farmer’s encounter during crop production, harvesting and marketing operations.

Transforming agriculture is only possible provided policymakers get out of the dominant mindset that considers agriculture to be a burden on the national exchequer.

It has to be acknowledged that the path to future economic growth definitely passes through agriculture. Given the right kind of policy push, farming can turn into an economic activity thereby not only strengthening the livelihood security for 600 million people directly or indirectly dependent on farming but in addition creating a huge demand that will reignite the wheels of economic growth.

This is the probable image of a sustainable future that the world awaits eagerly, where an ecologically sustainable agriculture corrects the climate imbalances, reduces income inequality and helps builds up sustainable livelihoods.