Why cats and dogs are acting differently in quarantine

For many dog and cat owners, quarantine seemed like the perfect opportunity to spend some quality time with their pets.

However, the stay-at-home orders that have been put in place around the country haven’t only mentally and emotionally impacted the wellbeing of people — pets have also shown a range of reactions to the changes.

On social media, pet owners have reported that both cats and dogs have begun displaying unusual behaviours, such as increased barking or clinginess, while others have become standoffish.

“Anyone else’s dog barking like five times more than usual during quarantine?” one person asked on Twitter. “Because I am going to lose my mind.”

Another said: “Personal #SocialDistancing update: My dog, Hank, was thrilled with the quarantine situation. More walks, having mommy home 24/7. Now he seems annoyed — he makes it a point to be in a different room than me, turns his butt to face me, and exhales loudly when I pet him.” 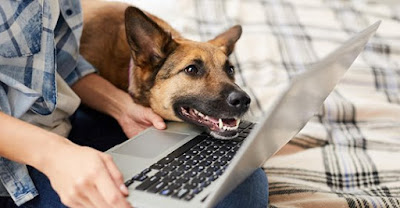 According to Dr Emily Levine, a board-certified veterinary behaviourist, co-owner of Instinct Englewood and owner of the Animal Behaviour Clinic of NJ, the differences in the behaviour of pets is expected — as animals react to change just like humans do.

“We’re seeing a whole array of different behaviour during this sudden time and it varies,” Dr Levine told The Independent. “It depends on the individual and what their likes and dislikes are and what their emotional state was before this.”

According to Dr Levine, there have been “some pets that are very happy that the people are home and they have more social interactions,” a positive change she’s seen impact dogs that were previously aggressive towards other dogs.

If “that aggression was coming from a place of ‘I want to spend more time with mum and dad and other dogs don’t come near them,’” now that their humans are home much more, that time “with the parents isn’t as rare and coveted”.

However, Dr Levine says she has also seen cases in which the opposite has happened, where dogs have begun demonstrating aggressive behaviour because “the whole family is stuck at home and the dog is getting tired of it”.

For example, if your dog or cat is used to having alone time while you’re at work, the likely increase in petting, hugging, kissing and overall attention as a result of social distancing measures may be frustrating for your pet.

For furry friends that appear to be withdrawing more, Dr Levine recommends giving them space to do so.

“To comfort the pet, it depends on the pet's personality,” she said, explaining that “if they are frustrated or anxious in the home because of loud noises or hugging and kissing, we want to make sure the dog has a place in the home that they can choose to go to and it's their own spot where nobody can bother them.

“If the dog is not loving all of this human attention, you want to stop, as hard as it is, and pull back on those interactions to keep the dog happy.”

High-energy pets may also be reacting differently now that their families are home, according to Dr Levine, who advises owners of very active dogs to respond accordingly with increased walks, playtime and activities.

“Energetic, smart dogs are going stir-crazy,” she told us, adding that their owners should try to give them exercise and “really tire them out by making them think and learn and use their brain”.

Teaching your dog tricks is one way of doing so, as is teaching them nose and scent work, according to Dr Levine, who recommends scentworkuniversity.com.

However, pet owners need to be aware that once their dog or cat has learned a new trick, it no longer counts as mental stimulation.

Following the same routine as before quarantine was in place is also helpful for most animals, and can make it easier for them to adjust to the situation.

For other pet owners, quarantine has led their dogs and cats to become clingier.

“My dog has been super clingy this whole quarantine lol,” someone tweeted, while another asked: “Has anyone else’s dog become EXTRA clingy during the quarantine?"

For those experiencing clingier pets, Dr Levine first suggests checking the animal isn’t in pain, as dogs and cats may display clinginess when they are in discomfort.

One of the primary causes of discomfort, which can be hard to diagnose, is musculoskeletal pain, according to Dr Levine, who recommends bringing your pet to the vet for an overall checkup if you notice that they have become extra clingy.

Anxiety is another reason pets may be increasingly clingy, which can be managed in a variety of ways, from probiotics to anxiety medication.

Factoring in a pet’s anxiety is especially important now, as it is expected that many cats and dogs will suffer from separation anxiety once quarantine ends and their parents return to their daily schedules.

To make it easier for your pet to adjust once social distancing measures lift, Dr Levine says that short trips out of the house where the pet is left behind can be useful.

Because pets are experiencing changes just like humans, it is not currently clear how different animals will react to this time in quarantine. However, animal behaviourists, such as Karen L Overall, are in the process of gathering data from pet owners through questionnaires in an effort to study these behavioural changes.

Overall, Dr Levine says that it is expected that dogs and cats will “respond differently throughout this process and the most important thing is to make sure they are feeling happy and comfortable”.