The number of deaths caused by coronavirus in Wuhan city has increased by 50 per cent after officials revised the figures to account for “belated, missed and mistaken reporting”.

Figures for the total number of infections in the city, where Covid-19 was first identified in December last year, has also risen to 50,333. The figure accounts for around two-thirds of China’s total of 82,367 cases.

The death toll increased by 1,290 and now stands at 3,869. State-owned Xinhua news agency said the original figures were due to insufficient admission capabilities of overwhelmed medical facilities during the peak of the outbreak there.

A notification issued by the Wuhan municipal government, published in Xinhua, said there were four main reasons for the data discrepancies – Covid-19 patients who did not die in hospital, medical staff “preoccupied with saving and treating patients”, new coronavirus hospitals that were “not linked to the epidemic information network” failing to report data in time, and lastly, inaccurate information on patients who died. 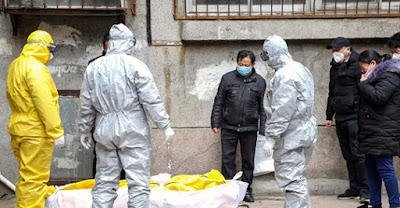 “Every life lost in the epidemic is not only a loss to their family but also a grief for the city,” added the municipal government. “Our sincere condolences go to the families of those who deceased in the Covid-19 epidemic, and we express deep sorrow to the compatriots and medical workers who lost their lives in the epidemic.”

The accuracy of China’s case reporting has been called into question numerous times, particularly with Wuhan going several days in January without reporting new cases or deaths.

Accusations that Chinese officials sought to minimise the impact of the outbreak by misreporting the true numbers have been made by experts and officials from other governments, including the UK.

Last month, Michael Gove blamed China for the failure to curb the spread of coronavirus. He said: “The first case of coronavirus in China was established in December of last year, but it was also the case that some of the reporting from China was not clear about the scale, the nature, the infectiousness of this.”

Wuhan’s new figures on the death toll come as data shows that China has suffered its worst economic contraction in decades in the first quarter of 2020 because of the pandemic.

The world’s second-largest economy shrank 6.8 per cent compared to the same period last year after numerous facilities and both domestic and international travel were shut down to mitigate the spread of the disease.

(Source: Independent)
Posted by Arjunpuri at 06:48