‘We must adapt and learn to live with the new reality of life with Covid-19,’ says Dr David Nabarro

People wearing face masks in public will become the new norm, a coronavirus expert has said.

Dr David Nabarro, the World Health Organisation’s (WHO) coronavirus special envoy, said he believed people wearing some form of facial protection outdoors will become commonplace, if only for reassurance.

Speaking to BBC Radio 4’s Today programme, Dr Nabarro said societies must adapt and “learn to live with the new reality of life with Covid-19” as the virus is likely to survive at varying levels within populations for some time.

“So what we’re saying is get societies defended. Yes, we will have to wear masks, yes, there will have to be more physical distancing, yes, we must protect the vulnerable,” he said. 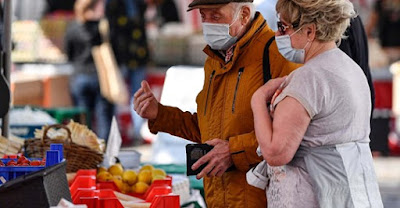 Acknowledging the worldwide shortage of face masks, Dr Nabarro said they should first go to health workers as a priority, before they are given to people with coronavirus symptoms and those around them, and then people working in close contact with others, such as cashiers and hairdressers.

“For the wider population, we probably won’t be able to ensure everybody quickly can access the good masks, the N95 masks, but then some form of facial protection I’m sure is going to become the norm – not least to give people reassurance,” he said.

“I don’t really like somebody in my role saying this is the advice, it’s up to national governments, but I think it will come because of what I’m calling being Covid-ready, learning to live with Covid.,” he added.

“It’s a revolution like when it was discovered that dirty water bore cholera in 1850, or like 25 years ago when we all learned about HIV/Aids and its relationship with sex. We changed and we adapted, we learned how to live with these new realities.”

Dr Nabarro said there would need to be evidence of the whole of society taking coronavirus symptoms seriously when they prepare for the lockdown to be lifted.

He said: “The most important thing to do is to isolate yourself when you have symptoms and make sure all those with whom you’ve been in contact recently isolate themselves as well.

“That’s what’s been done really successfully in Germany, we believe, and it’s that habit.

“It’s a habit, I want to stress this, that has to come into the whole of society... of really taking these symptoms, even mild symptoms, seriously and making sure you get out of everybody’s way.”

Dr Nabarro also warned against the dangers of wet markets, as well as killing and eating wild animals, after wet markets reopened in the Chinese city of Wuhan, where the Covid-19 outbreak began.

He said: “There are real dangers in these kinds of environments of pathogens hopping from animals to humans.

“Seventy-five per cent of emerging infections come from the animal kingdom, so we really do plead with governments and plead with just about everybody else to be respectful.”

UK officials have repeatedly pushed back on the use of masks, despite them making up official policy in other nations such as Austria where all those entering their local supermarket must have their faces covered.

Asked about Dr Nabarro’s comments, the UK’s chief scientific officer Sir David Vallance said the evidence still suggested masks were more effective when given to people who were already infected, as opposed to masking the healthy.

However, he noted there was an ongoing review into the effectiveness of masks to lead future government guidance.
“We are continuing to look at new evidence as it emerges and if there’s evidence that looks like we should change our advice we would do so”, he said in the government’s daily press conference.

Email ThisBlogThis!Share to TwitterShare to FacebookShare to Pinterest
Labels: coronavirus, covid-19, mask, WHO