Up to 6 million UK residents may have already had coronavirus, NHS adviser says

As many as 6 million people in the UK may have already contracted coronavirus, according to the scientist behind the government’s new contact tracing smartphone app.

Professor Christophe Fraser leads an NHS-backed team working at the forefront of efforts to track the spread of Covid-19 across the UK – with their app one of several measures experts hope could aid with the eventual easing of lockdown restrictions.

Appearing on the BBC to discuss the team’s progress, the University of Oxford epidemiologist was asked by Andrew Marr about the extent to which Covid-19 has already spread.

“There’s uncertainty around this but I would say nationally, somewhere between 3 and maybe up to 10 per cent of the population, will have had coronavirus by this stage,” Prof Fraser said. 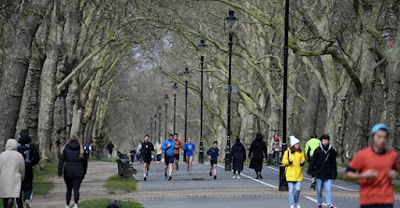 “We’re still waiting for the definitive studies based on immunological assays, but this is based on our understanding base of the spread of coronavirus.”

Asked if it could be “several million people, up to six million”, he replied: “That kind of figure – probably a bit less.”

The Department of Health has confirmed nearly 150,000 Covid-19 cases, but moved away from contact tracing in mid-March, deciding to offer tests only to hospital patients – against the advice of the World Health Organisation.

Asked whether lives would have been saved if contact tracing and testing had been pursued earlier, Prof Fraser said: “I think so.

“I worked on the Sars epidemic in 2003 and testing and tracing is really a cornerstone of how you stop a serious infection. I do think that strategy, scaled up, is tremendously effective.”

He added that traditional methods of contact tracing are not sufficient because of how rapidly the virus spreads, and because around half of transmissions occur before a person shows symptoms – an issue he believes his team’s smartphone app can resolve.

He revealed the app, which follows in the footsteps of those already adopted in Singapore and Israel, could be ready for launch “within weeks”.

The technology would detect when two smartphone owners are within two metres and check their status against a database of Covid-19 carriers. If either party triggers an alert, the other would get a warning – and possibly an order to isolate themselves as well.

Privacy campaigners and the UN have warned that technological surveillance measures should be introduced only in a strictly optional fashion.

While in Singapore, less than one in five people have downloaded the equivalent app, Prof Fraser said that ideally some 60 per cent of the population would use the UK’s for it to be successful.
“We found that when we projected over the next three months, for every one to two users who download the app and who adhere to instructions, you’ll prevent one infection,” he said.

“For this intervention alone to stop resurgence of the epidemic, about 60 per cent of the population would have to use the app.
“Now that number may be a bit smaller if there are other interventions going on, which we hope there will be, social distancing, large community testing, and indeed manual contact tracing.”

(Source: Independent)
Posted by Arjunpuri at 11:00