Every parent has different life lessons to pass on to their children and, while you might think "sharing is caring" is a pretty universal one, think again.

One mother started a big debate online after a post about her son sharing his toys at the playground went viral.

In a recent ChoosingBeggars subreddit, the mother, whose post was entitled "My child is not required to share with yours", writes how her son was approached by six boys on the playground demanding he shares his transformer Minecraft figure and truck. She wrote:

He was visibly overwhelmed and clutched them to his chest as the boys reached for them.

'You can tell him no Carson,' I said. 'Just say no. You don't have to say anything else.'

But as soon as the little boy said no, the boys went to tattle on him, evoking some dirty looks from other parents at the playground. 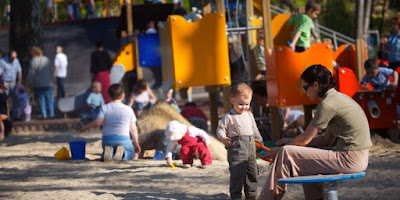 The mother stood by her decision to teach her son to refuse to share his toys, adding:

Here is the thing though: If I, an adult, walked into the park eating a sandwich, am I required to share my sandwich with strangers in the park? No!

Would any well-mannered adult, a stranger, reach out to help themselves to my sandwich, and get huggy if I pulled it away? No again.

The goal is to teach our children how to function as adults. While I do know some adults who clearly never learned how to share as children, I know far more who don't know how to say no to people, or how to set boundaries, or how to practice self-care. Myself included.

Dapper_Presentation2874 points6 months ago
I teach my kids to share with their friends and siblings. Strangers? Who's to say that kid won't run off with it?

atombomb194546 points6 months ago
This happened far to many times to me growing up.

chrisrico15 points6 months ago
Sharing is a choice, not an obligation. The moment it becomes compulsory you strip away all the good emotions that come with it.

mommyof4not2577 points6 months ago
Other parents in my family are truly disturbed that I never forced sharing.

The only people my kids (5 and 2) are required to share with are each other and that's only communal things like the toy workbench or toy shop in their room.

Other than that my rule is whichever child has it last can play with it as long as they wish and if I hear a bunch of screaming or arguing over it, it goes up on the shelf for the rest of the day. And I've only had to do it a couple of times and it's no big deal.

mommyof4not236 points6 months ago
I think other parents think it's lazy, I'm really just trying to get them to develop enough social skills to function without me being 2 feet away coaching everyone on how to be a human.


FinancialRaise17 points6 months ago
Unpopular opinion, but I dont want to add to an echo chamber so heres another side to it. While its true that sharing is not necessary, learning to recognize if someone whats to share something of yours and being able to part with it for a while to see the other person happy is a useful skill. Not a required skill, but if we are talking real world, networking and making friends get people through a lot of doors, not playing alone.