It's the exercise class loved by David Beckham, Ellie Goulding and Harry Styles. Writer Olivia Petter tries it every day for one week

Would anyone notice if I vomited on this treadmill? Not a full-blown “two bottles of wine later” kind of vomit, just a release. Something, anything to make this easier. I’ve been running at 11 miles per hour for 45 seconds and I am talking to myself. Going up to 12 now. “60 more seconds! Smash it!” shouts the enthusiastic trainer leading the class. “Yeah, see your goals? Yeah! Crush ‘em!” I suspect he once had a career in the military. “Now, give me your fastest speed yet!” Oh god. My stomach is lurching. Here it comes. This is going to be so embarrassing...

Barry’s Bootcamp is one of the toughest exercise classes in London. Last week, I did it for seven days straight for one of its regular “Hell Week” challenges and I just about managed to keep any vomit urges at bay. 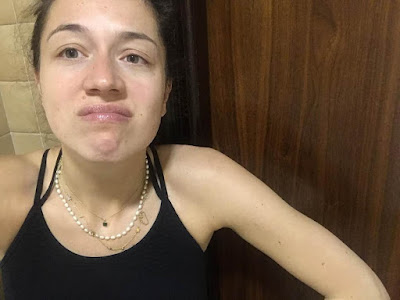 Each class combines 25 minutes of cardio with 25 minutes of weights in what will be the most gruelling 50 minutes of your life. The theory goes that each one burns 1,000 calories. Since launching in the UK in 2013 – it originates in Los Angeles – Barry’s has become one of the most sought-after boutique exercise classes around the world, with branches in Dubai, Paris and Melbourne. There are now five studios in London and one in Manchester.

Like many of its contemporaries (think SoulCycle), Barry’s Bootcamp has developed a cult following, with David Beckham, Ellie Goulding and Harry Styles among its regular attendees.

I’d been several times before, but on an exclusively sporadic basis. It was in the run-up to a holiday to Italy that I, like 900 others across the UK, decided to try Hell Week.

The week works, according to Barry’s UK co-founder and master trainer Sandy Macaskill, because the schedule is designed to challenge different body parts on each day. So on Tuesdays, it’s full body with a “lower focus” and on Thursdays, it’s “ass and abs”.

“But mainly it’s a mental challenge,” Macaskill tells me. “Committing to something every day of the week is harder than it sounds. It has become an iconic challenge for our clients.”

But is exercising for seven days in a row medically advisable? Physiotherapist Lucy Macdonald of Octopus Clinic, London reassures me that it can be, so long as the exercises are suited to the individual.

“There can be huge benefits to working out in this way, which can range from improving muscle tone, fat reduction, cardiovascular fitness and mental health and productivity,” she explains.

“But if the exercise is not tailored to you, and you’re pushing yourself beyond your limits, then there could be a high risk of overuse injuries to the joints and muscles, a compromise to the immune system and a negative impact on mental health due to increased stress or feelings of failure.”

Day one: Arms and Abs, West London studio
Haven’t been to the gym in a few days in preparation. Feeling good. Hoping I’ll see Harry Styles and he’ll fall madly in love with me and then we’ll come to Barry’s together #couplegoals.

The instructor tells me to get some medium weights, either 5kg, 6kg or 7.5kg. My arms have the strength of limp spaghetti, but I decide I have to go big or go home on my first day and, seeing as I can’t go home without losing the £22 class price, I go for the 7.5kg.

Midway through some hill sprints, I decide to check my phone for any breaking news alerts (because this would mean having to sprint back to my office, which is not ideal).There are none, but I’m told off by the instructor for looking at my phone. It’s embarrassing and now I can’t remember what I’ve been told to do. So I just keep running until I realise everyone else stopped a few seconds ago and is now looking at me like I’m the class nerd.

Day two: Full body (lower focus), West London studio
I ruined my efforts after yesterday’s class by eating eight mini chocolate Easter eggs and an entire full-sized chocolate egg. I have mixed feelings about it: while the chocolate was delicious, I have been bloated all day. And doing Barry’s with a bloated belly is not ideal. Also, my arms are very sore. Serves me right for choosing the 7.5kg. But I tell myself it should be fine, because today is a “lower focus” class, which means no arm exercises. Phew.

The majority of my classmates today are whippet-thin regulars. The men are topless. The women are proudly displaying their Sweaty Betty/Lululemon sports bras. I’m wearing tracksuit bottoms and a plain white Topman T-shirt that I found in my cupboard this morning. I am also late to the class, which means I have arrived sweating and out of breath. We do countless of incline sprints again, followed by lunge jumps and more lunges. My legs burn. A lot.

Then to my surprise there’s some more arm action, ouch. I hobble out at the end of the class and check my phone, which I left in my locker this time. It’s a slow news day and David Attenborough is still alive. Phew.

Day three: Chest, back and abs, West London studio
I’m not sure if it’s because my body is adapting or because I had five giant falafels for lunch, but I have much more energy in today’s class than normal, which makes the whole thing surprisingly pleasant.

We did have to run up an incline of 10.5 though (the max is 15) for what felt like an age. Then we had to do chest presses and many, many press ups. The arm pain has subsided from the last day and moved into my legs, so these exercises are bearable. There is a woman two treadmills down from me who hasn’t stopped running the entire time. Not even in the recovery periods. She’s skipped right over the weights section, and has just carried on running. Is she a professional athlete? A marathon runner? A cheetah? The jury’s out.

Day four: Abs and ass, Central London studio
This class is fun, dare I say it. We’ve each got some resistance straps tied around our ankles and I actually kind of enjoy feeling my muscles tighten when I perform the exercises, which are a mix of kick-outs, squats and other movements that are actually really hard to describe. Let’s just say, they hurt enough for me to make wimpering sounds that the music is thankfully loud enough to drown out.

Speaking of the music, it’s particularly fun during this class too (Sean Paul even made an appearance) and keeps me going. I manage to get myself through the final round of sprints by imaging myself dancing on stage at Glastonbury with Miley Cyrus. I run my fastest speed yet.

Day five: Total body, Canary Wharf studio
I am almost beaten by the prospect of having to go to another class so soon – and my muscles are beginning to hate me. Four days in, it's hard to distinguish which part of my body hurts more. The aches and pains have become one.

I decide to switch things up by trying one of Barry’s newest studios in the glossy metropolis that is Canary Wharf. It’s much fancier than any of the others, not least because the majority if the clients are clearly city workers and arrive primed to trade tailored suits for slick athleisure faster than you can say “lunge jumps”.

The class itself is fairly manageable. With no focus on a one particular body part, I don’t find myself hurting too much in a specific area afterwards. But at the end we had to choose our own incline and run at 9mph. This is good for my competitive spirit. The person next to me chooses three. Pah. On my other side: five. I choose seven. I almost fall off my treadmill.

Day six: Full body (upper focus), Central London studio
I’m going to Somerset tonight for a first birthday party, which means I need to wake up early (7am) to squeeze in a Barry’s class before catching a lift with a friend. I’m really tired and have run out of clean workout gear so have to use the same one from yesterday. Today’s class is unpleasant, and it hasn’t even started yet.

The class is led by Mackaskill. I was excited to book his class not just because he’s one of the best trainers at Barry’s, but also because I once did one of his classes and Harry Styles was there.

I put red lipstick on as I enter the studio. Instead of the six eight-minute rounds (three on the treadmills and three on the floor), the session is split into four longer 12-minute rounds. It feels much tougher, the running in particular. And I sweat more, meaning the red lipstick ends up all over my mouth when I wipe my face dry with a towel. Styles was not there to see any of this, thank god.

Day seven: Total body, Central London studio
Dear lord. First birthday parties are a much boozier affair than I had anticipated. I left Somerset early to make it back to London in time for the last hurdle of my week-long Barry’s challenge. Everything hurts. I had crisps for breakfast.

Miraculously, I arrive on time for the class, during which I run the slowest speeds and lift the lightest weights (4kg).

It’s going okay, until midway through one of the final sprints, the vomit feeling creeps on me out of nowhere. The espresso martinis, the gins and tonics, the rosés, it’s all coming back. And up. Until, it doesn’t. The class has finished and I’m on the floor, vomit-free, with sweat pouring out of every crevice. I check beside me for vomit, just in case. Nothing. And in some magical twist of fate, the hangover seems to have subsided.

Final thoughts
I survived. While my body has definitely suffered this week, my muscles are in nowhere near as much pain as I’d anticipated. In fact, any soreness seemed to have subsided by the fourth day. I think by then my body had adapted to the physical torture I was putting it through. Either that, or I just became accustomed to the pain. I definitely did feel stronger too, though after five days of living off pasta, red wine and, erm, white wine in Italy, this is sadly no longer the case. I don’t look any different, really. But when I stretched my arms in front of my friend the other day, she did comment on my “athletic shoulders”. So there’s that.

While I wouldn’t do a Barry’s Hell Week again (my social calendar wouldn’t allow for it), I will definitely return to the class. I’ve tried almost every boutique fitness class in London, and not one of them has challenged me as much, nor offered such indulgent post-workout smoothies (try the Simply PB one). Plus, who knows, next time I might run into Styles.