Japan's love of the hanky is nothing to be sneezed at

Japan excels at taking ideas from different cultures and tweaking them to fit the local lifestyle. In some cases, the Japanese version ends up outshining the original, and this is certainly the case with the handkerchief.

Handkerchiefs have largely disappeared from daily life in the West, where its use is mostly limited to an accessory, like a pocket square of a man’s jacket for a formal occasion, such as at a wedding. In Japan, however, the majority of the populace, from small children to the elderly, still carry a handkerchief on a regular basis.

Handkerchiefs serve multiple purposes: For drying your hands in public restrooms that don’t have driers or paper towels, for blotting sweat off your face in the humid summer months, or for resting on your lap while eating a boxed lunch. In a pinch, they can cover your head during a rain shower, or be used for wiping off a wet bicycle seat when the rain has stopped.

Most Japanese have a variety of handkerchiefs and take a clean one with them each day. Mothers typically remind their children not to forget their hankies on a daily basis, and some teachers even follow up when the students get to class.
The one thing Japanese never use a handkerchief for is blowing their noses. That’s where tissues come in handy. In fact, as anyone who has commuted to work on a Japanese train knows, blowing your nose in public is generally not the done thing; it is considered acceptable to adopt a persistent sniff, however.

Japan’s relationship with the handkerchief dates back to the start of the Meiji Era (1868-1912), when the country was warming up to Western culture and eager to embrace new ideas.

Tokyo-based firm Blooming Nakanishi and Company has a long tradition of producing quality handkerchiefs for the domestic market. The company was established in 1879 by Gihei Nakanishi in the Nihonbashi Ningyocho district, which was the heart of the city’s commercial center at the time. In 2003, the company opened a specialty boutique, Classics the Small Luxury, in the Roppongi Hills shopping complex and it is believed to be the world’s only brick-and-mortar store entirely dedicated to the handkerchief.

The firm’s current president, Hajime Nakanishi, is the great-great-grandson of founder Gihei and the fifth generation to lead the company. According to Nakanishi, a major reason that Japan embraced handkerchiefs so readily was due to the well-established custom of carrying tenugui, rectangular flat woven cotton cloths. Their use is thought to date back to the eight century.

“People used to carry tenugui when they dressed in kimono. When Western fashions became popular during the Meiji Era, it was a natural progression to carrying a handkerchief instead,” he explains.

According to Nakanishi, Japan is now the largest market for handkerchiefs in the world. So why has the humble hanky remained so popular in Japan over the decades?

“In Western culture, the image of the handkerchief was mostly for blowing noses, but nowadays people generally use tissues instead. However, in Japan, handkerchiefs have always been valued for other uses,” says Nakanishi. “Also, Japan has a culture of gift giving and they are very popular as reasonably-priced gifts, and they come in so many designs and colors.”

In a complete turnaround from the Meiji Era, international visitors are now purchasing Japan’s handkerchiefs. Around 10 percent of Blooming Nakanishi’s customers are from overseas, and items featuring quintessential Japanese designs and motifs are popular. Many people also take advantage of the opportunity to have their purchases customized in-store with embroidered monograms or motifs.

“When I was child, my mother asking , ‘Do you have a handkerchief?’ was part of my daily life,” says Asami Koshimizu, area manager for Classics the Small Luxury. “I wanted to work here because I thought it was great that we can give people the opportunity to personalize their own handkerchiefs … making an everyday item special, or creating something for that important person in your life.” 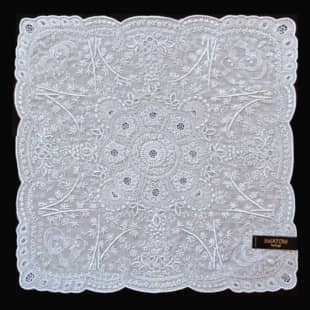 Blooming Nakanishi’s policy has always been to seek out the best sources for materials and skilled artisans around Japan. Most of the designs are screen printed in Yokohama, which has a long history in the art. The colors are printed one by one, moving from light to dark, and then are steamed to set and seal the colors. Once the fabric is dried, it is ironed and cut. Around 90 percent of the company’s items have hems that are rolled and sewn by hand in a fishing village in Aomori Prefecture, providing a luxurious finish. The Aomori location was selected due to the high level of sewing skills of the locals, honed by a culture of mending fishing nets.

For some of its most elegant designs, the company uses exquisite and intricate hand embroidered lace from China, known as Swatow lace. Nakanishi says the art was originally taught to locals in Swatow (aka Shantou) by visiting Italian monks, but now it is mostly only elderly women who can still perform the level of artistry required.

Nakanishi is proud of the part that his firm is playing in preserving the culture of an item that originally came to Japan from the West. With the upswing in the number of overseas visitors to Japan, as well as growing interest in environmentally friendly items for everyday life, his firm is working on further expanding its appeal to the overseas market.

For the last word on handkerchiefs, Nakanishi quotes his father, the fourth president of the firm: “A man should carry three handkerchiefs — one for wiping hands, one for when eating and one you can offer for drying someone’s tears.”