The world’s coldest city is now easier to reach, thanks to a new rail link.

Yakutsk in north-east Siberia has been connected to the Russian rail network – almost.

The European Rail Timetable (ERT) reports that passenger trains have started running on the Amur-Yakutsk main line, known as AYAM.

This is effectively a 700-mile spur from the small city of Tynda on the Baikal-Amur Railway (BAM), which itself branches off from the Trans-Siberian Railway.

But the ERT compilers report that a passenger train is now running on alternate days to cover the 272 miles over the permafrost to the closest station to Yakutsk: Nizhny Bestyakh.

At this point, though, the passenger’s problems could only be beginning – because Yakutsk is on the other side of the Lena river, which stretches several miles across at this point. 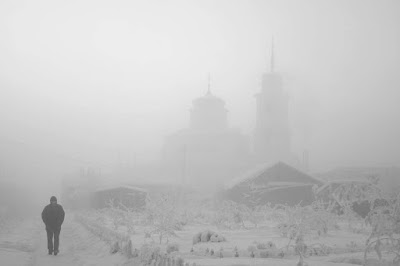 In summer, ferries cross the Lena, and in winter when the river is frozen, vehicle drive across. But the ERT says: “There is no way to cross the river in spring or autumn due to moving ice.”

Travellers do not have to wait long for winter. The river normally freezes at Yakutsk in late October, and remains frozen for 30 weeks.

Yakutsk has an average high of -35C in December. At this temperature, reported Shaun Walker for The Independent, “The air is cold enough to numb exposed skin quickly, making frostbite a constant hazard.”

When he ventured outside in a temperature of minus 43C, he reported: “The first place to suffer is the exposed skin on my face, which begins to sting, and then experience shooting pains, before going numb, which is apparently dangerous, because it means blood flow to the skin has stopped.”

He abandoned the experiment after 13 minutes.

But Henry Lansdell, a British traveller who visited late 19th century, wrote: “Yakutsk has the credit of being the coldest place upon the face of the earth.

“So accustomed, however, do the natives become to the cold, that with the thermometer at unheard-of degrees below freezing point, the Yakut women, with bare arms, stand in the open-air markets, chattering and joking as pleasantly as if in genial spring.”

The rail journey from Moscow takes about a week, with a third-class fare equivalent to £130. In summer, however, the new rail link may prove more tempting than the existing terrestrial transport: a five-day, 1,250-mile journey by the Krasnoyarsk paddle-steamer departing every 17 days from the Siberian river port of Ust Kut.

Another visitor, Margaret Campbell, wrote in The Independent: “The Krasnoyarsk is not a cruise ship and amenities are basic. One hot meal a day is served in the ship’s canteen. Showers cost about 25p each. Toilets are seat-less and paper-less.”

But passengers are treated to a slow-motion journey through the world’s largest country: ”The fir, larch and cedar trees were occasionally separated by meadows clustered around hamlets that may or may not have been ghost villages.

“Chekhov’s description of the taiga was apt: ‘Where it ends, only the migrating birds know’.”

Most travellers between Moscow and Yakutsk prefer to fly. There are several daily flights from the Russian capital to the city, a distance of around 3,100 miles.