Considered one of the world's most important literary works, the Ramayana has captured the imagination of many who read or listen to the Indian epic. 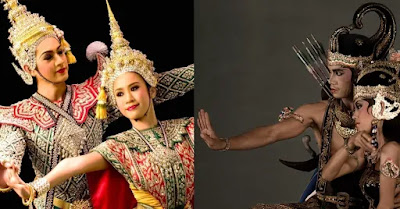 The poem, believed to have been written by Valmiki in the 5th century BCE is one of India's two great literary works after the Mahabharata.

With all of its 24,000 verses composed in Sanskrit, the story of Rama and Sita has been told and retold for countless generations in the Southeast Asian region.

More than just a love story.

The Ramayana tells the story of Prince Rama who goes in exile into the forest for 14 years upon the orders of his father together with his wife, Sita, and brother, Lakshamana.

Unfortunately, tragedy strikes when Sita gets kidnapped by the evil demon king, Ravana. Rama begins his quest to rescue his wife through the help of the Vanaras, a clan of monkeys.

While the Ramayana has been popularized as a love story, the saga of Rama deals with many themes that we often encounter in life. Because of this, the story has been told in various forms.

From comics, to films, animated features, television series, painting, dance, theater and exhibitions, the Ramayana is now a part of a larger narrative of the world.

Courtesy of Hindu influence over the Southeast Asian region, each country, save for Vietnam, have their own unique versions of the legend.

The Ramayana is believed to have arrived at Cambodia sometime during the 7th century in the form of a poem. This is according to the Veal Kantel inscriptions.

Titled Reamker, which means "Glory to Rama" in the Cambodian language, famous scenes of the epic can be seen on the walls of the Royal Palace and Angkor Wat. The Reamker gives more emphasis to Hanuman, one of Rama's staunches allies through additional scenes.

Cambodians fused Hindu ideas and Buddhism themes together to perform the poem through their dance theatre, L'khaon. The dance is part of the royal ballet's reportoire and is commonly performed during festive seasons in Cambodia.

In the Javanese version of the legend titled Kakawin Ramayana, the second half of the Ramayana diverges from its original Sanskrit version. The modifications include the indigenous Javanase deity, Semar, and his three sons, Gareng, Petruk, and Bagong.

Apparently the Indonesian version was based on the Ravanavadha, a sixth century retelling of the Ramayana by Indian poet Bhattikavya. Written in 870 CE, the focus is more on the antagonist, Ravana.

With Indonesia too, heavily influenced by India, the characters from the Ramayana can be seen in the 9th century Prambanan temple in Yogyakarta.

Interestingly, the Laos version of the story, Phra Lak Phra Lam, focuses more on the heroism of Rama's brother, Lakshamana.

Since Laos has its roots in Buddhism, Rama is believed to be the previous reincarnation of the Buddha, according to the locals.

Considered a national epic, the Ramayana arrived in the Southeast Asian much later than Cambodia and Thailand. By the time it arrived, the legend had lost much of its Hindu influence and became a much more localized.

The title of the retelling is named after the two brothers, Lakshamana (Phra Lak) and Rama (Phra Lam).

The Malaysian retelling of the epic, Hikayat Seri Rama (Chronicle of the Great Rama), is a little more special because it incorporates shadow puppetry.

This Malay adaptation of the Hindu retelling maintains its originality but with slight modifications to certain scenes where the minor characters are upgraded to become major players.

For example, Lakshamana plays a much more important role than the legend's protagonist, Rama, which the story is based on. In the Malaysian adaptation, Rama, though virtuous, is often seen as weak while his brother courageous and much more focused.

The tale of Rama and Sita is also told through the traditional dance-drama Mak Yung.

Yama Zatdaw or Yamayana is heavily influenced by Thailand's version of the Ramayana due to the invasion of Burma by the Siamese kings of the Konbaung Dynasty during the 15th century.

Just like Laos, the Yama Zatdaw borrows elements from the Theravada Buddhist culture as well. The story, Rama sā-khyan, was believed to have been told orally during King Anawratha's reign before it was composed by U Aung Phyo in 1775.

Meanwhile, Loik Samoing Ram is the Mon version of the epic which incorporates elements found in Thailand, Java, and Malaysia but with its own unique episodes. It was written by a Buddhist monk named Uttama in 1834.

According to indologist Juan R. Francisco, the Ramayana arrived at Filipino shores sometime between the 17th to 19th century thanks to Javanese and Malayan traders who themselves were influenced by India.
The Maharadia Lawana, written as an epic poem by the Maranao people, became indigenized and has contrasting differences from the original Sanskrit version. Character names and locations were changed to perhaps suit the cultural perspectives and orientations of the locals.

Just like Laos, Thailand's version of the legend, Ramakien, is considered a national epic.

However, unlike the original Sanskrit version, Sita is the daughter of the antagonist Thotsakan (Ravana). Phiphek, the astrologer brother of Thotsakan predicts that Ravana would die because of Sita. Furious, he throws his daughter into a river and she is rescued by Chanok.

Under the supervision of King Rama I of the Chakri dynasty which still maintains the royal throne today, the story was reconstructed. King Rama II further adapted the retelling for the khon drama. This version has an added role for Hanuman who is often portrayed lasciviously.

Today, the Ramakien forms an integral part of Thai culture and is taught in schools nationwide.

In India alone, the birthplace of the Ramayana, there are various versions of the epic told and retold.

Yet, it amazes me how the legend travelled throughout the ages to seven different countries, with each nation making it their own.

Would the tale of Rama and Sita continue to capture people's imaginations and thrive? It will for generations to come so long as the beautiful arts and cultural works above are preserved.

(Source: Mashable)
Posted by Arjunpuri at 03:30