As the Australian bushfires continue to ravage the wildlife habitat of the country, many people have come in support of the victims of the natural calamity. Like the teenagers who rescued 20 koalas from Kangaroo Island to the Indian restaurant which served free meals to people affected by the bushfires, to even those who dived right into flaming forests to save koalas from burning.

Adding to the list is this Sikh woman who cancelled her trip back to India after 10 years to cook meals for the Australian bushfire victims, reports Daily Mail.

35-year-old Sukhwinder Kaur, who lives in Melbourne, was all set to come back to India after receiving news of her sister suffering a stroke. However, she decided to stay back in Melbourne and now cooks more than 1,000 meals a day for families who were forced to flee after their houses were set ablaze. These houses were in East Gippsland which were destroyed by the fires. 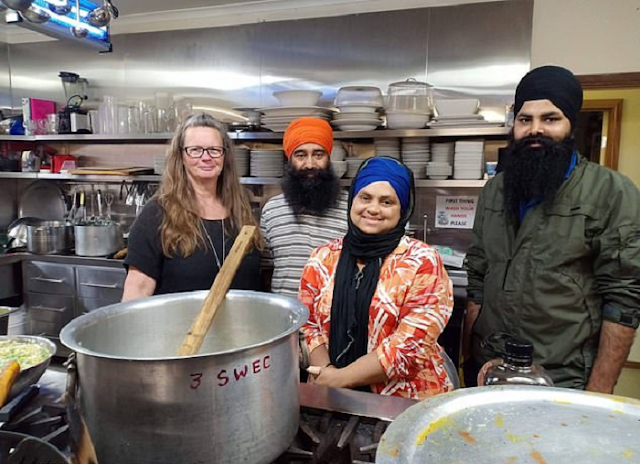 “I realised my first duty is towards the community here where I have lived for so long. If I had left the people here during such a difficult time, I don’t think I could call myself a good human being,” Sukhwinder said.

She was been working since New Year’s Eve from morning to midnight. In fact, Sukhwinder stays in a room just beside the kitchen so that she can get to work right after she wakes up.

“This is my family too and I have a responsibility towards it. I just can’t go while my family is suffering,” Sukhwinder said.
“I feel particularly happy when I see that no food is wasted and all of it is used up in the community,” she added.

Sikh Volunteers Australia took to Facebook to appreciate the efforts of Sukhwinder. They wrote:
“No words can describe the dedication of our lovely hard-working CHEF Sukhwinder Kaur who is working continuously from last 5 days in bush fire affected area Gippsland region Bairnsdale. She is preparing food 3 times a day around 400 meals.”

While we as humans cannot stop the bushfires, we can at least join hands to help those who are suffering due to it. We applaud this woman for her grit to do what is right!