n their new roles as Canadian celebrities who do charity work, Harry and Meghan are no longer public property

At last the Duke and Duchess of Sussex will be able to escape the racism, the misogyny, the distortions, the intrusions, the fictions, the cruelties

So that’s them gone, then. It’s not hard to see why – the media drove them out, more than any other single factor, and their role just wasn’t worth the sacrifices.

No one does understatement and euphemism like the Queen. In the Buckingham Palace statement, her meaning is clear: “I recognise the challenges they have experienced as a result of intense scrutiny over the last two years and support their wish for a more independent life.”

“Intense scrutiny” means “the press made their lives hell” and “independent life” means they don’t wish to put up with it any longer. It bears repeating that the intense media interest in Diana contributed to her death in 1997 – when Harry was 12 years old. Prince Harry certainly holds the press responsible, and is plainly determined to make sure that his wife and son would not continue to be subject to that same sort of treatment. Anything else – their roles in the pecking order and all the rest of it – is secondary. 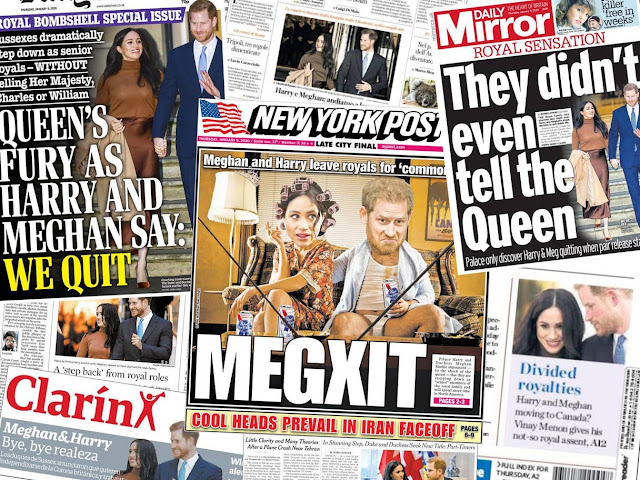 When the Sussexes decided to sue the newspapers recently, the defence the Mail on Sunday put up for its coverage of their lives was instructive. Meghan “is a major public figure, whose fitness to perform royal duties on behalf of the Crown and to be the recipient of public money is a proper matter for public scrutiny, and whose conduct, past and present, both in public and private, including her conduct in her relationships with her family and other people, is rightly of enormous public interest”. Further, she and Harry “rely on publicity about themselves and their lives to maintain the privileged positions they hold”. Fair game, in other words.

The threat followed that they’d call Meghan’s father into court and tear chunks out of her. Anyone in any doubt about the media campaign of hate being waged against Meghan need only to reflect on those words and actions.

In effect, though, that Mail on Sunday defence document represented a guide for Harry and Meghan to use to escape media “scrutiny”, ie persecution. The HRH titles will be ditched, they will not represent the Queen, they will “step back” from royal duties, they won’t take taxpayers’ money and will pay back the money spent on refurbishing their Windsor “cottage”. They’ll live in Canada, and they’ll be at best celebs doing charity work rather than British public or state figures in the traditional sense. Thus there can be vastly less “public interest” – in the media’s own terms – in their private lives.

The rest is detail. The bill for the security detail can be dealt with; they will be able to generate revenues of their own; the accountants can sort out the tax. They’ll not need a food bank. No one beyond some frustrated editors cares that much.

It’s a shame, of course. They were good at the job, and a much-needed modernising influence. The Queen has acknowledged that and wishes them well, with much love in that statement, tinged with some anxiety; so much for a furious rift with granny. She too wants them to have a “happy and peaceful new life”.

At last Harry and Meghan will be able to escape the racism, the misogyny, the distortions, the intrusions, the fictions, the cruelties. They have proved that they don’t have to take it, and that they can indeed opt out. They are no longer public property.

The British monarchy has lost two of its brightest stars. The royal show will go on, of course, as it did after Diana, or the abdication of a king in 1936.

But Harry and Meghan will be missed, most of all by the British tabloid press. They won’t have Meghan to kick around any more.