20 years ago, Indian TV shows were so progressive. What in the world has happened to us now?

The other day, when my internet connection was being a pain, I switched on the TV after really long. Big Boss. Nope. Click. Super Dancer with Shilpa Shetty. Click. Sasural Simar Ka. *facepalm*

It's sad to see Indian television becoming synonymous with regressive saas-bahu sagas and pointless reality shows.
One of the major shifts that took place on Indian television was one person who denoted an era of her own - Ekta Kapoor. Unfortunately for us, she struck gold with the concept of family shows being held together by a lead woman character. These women were created to tick all the attributes of some regressive ideal of the beti, bahu, biwi. The purpose of their lives seems to be to be sorry for everything happening around them.

Indian television also has become the den of reality TV shows where anger, expletives, flaring tempers sell more than any of the talent hunt. So we see a bunch of middle-aged men fighting over whether an upcoming singer will have roti in his house after the show gets over. It's good entertainment for the audience as we see foul-mouthed judges give it to each other. And that's that.

And that's when I drowned in my own thought about what happened to Indian television? It was decent growing up with the Malgudi Days, Byomkesh Bakshis of my time. And then everything went to shit.

Back in the '90s, TV shows were so much more progressive. Shows like Hasratein portrayed real women with shades of gray.
Compare the regressive drivel we watch with some of the shows from the 90s like Hasratein which showed a woman leaving her husband to start a relationship with her married boss, was something way ahead of its time and the audience accepted it with equal maturity.

And now where we see a Simar turning into a fly and taking her revenge on the vamp of the family, we had the progressive Astitva around 2000. Astitva showed a career-oriented woman marrying a man almost a decade younger to her. 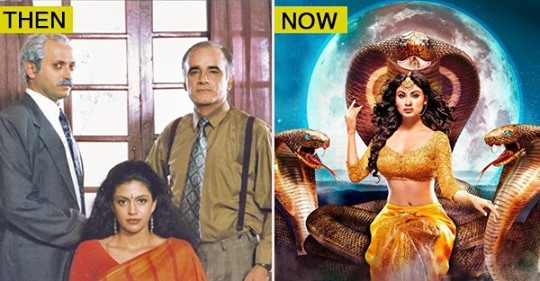 Today one of the highest rated shows is Naagin - which shows a woman shape-shifting into a serpent. Compare this to Mandira Bedi's gig as Shanti, a journalist who digs up the dark secrets from the past of two Bollywood professionals. How have we got more regressive with our leading women?

Women in Ekta Kapoor's shows don't seem to ever have a life of their own. Their entire universe seems to revolve around their husbands or their in-laws. But 23 years ago (yes, before Sex and the City), Tara portrayed women and their friendships, which are closer to reality.

Around the same time there was Banegi Apni Baat. It had realistic characters, and beautifully portrayed different relationships: mother-daughter, friends, lovers. This show had a great cast and some poignant performances. R. Madhavan started his acting career with this show.

How did the rib-tickling humor get replaced by cross-dressing men laughing on cue?
There was the era of the Dekh Bhai Dekhs, Hum Paanchs and the Family No. 1s - where we saw seriously good actors like Naveen Nishchol, Farida Jalal, Ashok Saraf and even Kanwaljeet Singh participate in the tomfoolery. That has now been replaced by The Kapil Sharma Show, which is home for most Bollywood stars who come to promote their films.

And they are welcomed by a bunch of cross-dressing men who crack jokes and laugh when an alarm called Navjot Singh Sidhu rings. Along with this is the Great India Comedy Circus which makes fun of it's overweight host by routinely comparing her to a buffalo. What happened to good ol' slapstick humour which can be dumb and still amusing?

Today's shows exist in this bubble of unreal melodrama. What happened to relatability?
While most of today's soap operas claim to give us a picture of what goes on inside the middle class family, it doesn't even come close to something that a Wagle Ki Duniya achieved in the 90s. The show which starred a little known Bollywood actor called Shah Rukh Khan, spoke about the everyday mishaps a middle class Indian family went through.

The same decade even had Mungerilal Ke Haseen Sapne, where a man afraid of his domineering wife and his boss becomes a braver version of himself. Only in his dreams though. Why has all that charm been replaced by this template of a north Indian middle-class family which has the same sort of characters, face the same kind of problems and look painstakingly generic.

Today we have nothing in the league of Just Mohabbat and Hip Hip Hurray. Show-runners have slowly wiped out all the shows for young adults.
The 90s had shows like Hip Hip Hurray, Just Mohabbat which addressed most adolescent issues with its own tinge of humour. Hip Hip Hurray followed a bunch of school kids going through the angst of growing up, Just Mohabbat dealt with an upper middle-class kid dealing with the pressures of having working parents. The kid copes with it by confiding in an imaginary friend by his side.

Shows like those have now been replaced with drivel like Dare To Date, Roadies and Splitsvilla, which aim at giving youngsters an 'opportunity to prove themselves' while other youngsters look on with amusement.

What have we done? How did we get here?
We've been bitten by the vicious bug of catering to the audience. Show-runners are so convinced that the TV audience comprises of an audience which cannot appreciate cerebral content, that they have begun tailoring products to the mass preference, while the masses keep complaining there is nothing else to watch. It's a cycle.

And it can be broken by the show-runners themselves, if they take a leap of faith and try to make content which challenges the audience. The transition will be slow, but it is worth aiming for.