Some fear that World War 3 may break out, while others are concerned that they will get drafted into a war against Iran.
It remains to be seen what will happen next but for many, it is proving to be a reminder of previous conflicts between the west and the middle east.

Back in 1998, MPs debated whether the UK should carry out a bombing raid on Iraq in conjunction with the United States after Iraq failed to comply with the UN's security councils' demands over disarmament and relinquish their weapons of mass destruction.

On the day that MPs voted to bomb Iraq (Februay 17 1998), the much-celebrated Labour MP Tony Benn gave a now iconic and passionate speech that highlighted the fundamental problem with war and how it ultimately has a greater effect on innocent people than those that should be held culpable. 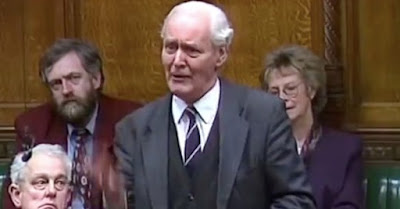 I finish just by saying this: war is an easy thing to talk about; there are not many people - a - of the generation that remember it. The right hon. Member for Old Bexley and Sidcup served with distinction in the last war. I never killed anyone but I wore uniform. But I was in London in the blitz in 1940, living in the Millbank tower, where I was born. Some different ideas have come in since. And every night, I went down to the shelter in Thames house. Every morning, I saw dockland burning. Five hundred people were killed in Westminster one night by a land mine. It was terrifying. Aren't Arabs terrified? Aren't Iraqis terrified? Don't Arab and Iraqi women weep when their children die? Does bombing strengthen their determination? What fools we are to live in a generation for which war is a computer game for our children and just an interesting little Channel Four news item.

Every Member of Parliament tonight who votes for the Government motion will be consciously and deliberately accepting responsibility for the deaths of innocent people if the war begins, as I fear it will. Now that's for their decision to take. But this is a quite unique debate. In my parliamentary experience, where we are asked to share responsibility for a decision we won't really be taking, with consequences for people who have no part to play in the brutality of the regime which we are dealing with.

And I finish with this: on 24 October 1945—the right hon. Member for Old Bexley and Sidcup will remember—the United Nations charter was passed. And the words of that charter are etched into my mind and move me even as I think of them.

"We the peoples of the United Nations determined to save succeeding generations from the scourge of war, which twice in our life-time has caused untold suffering to mankind". That was the pledge of that generation to this generation, and it would be the greatest betrayal of all if we voted to abandon the charter, and take unilateral action and pretend that we were doing it in the name of the international community. And I shall vote against the motion for the reasons that I have given the house.


In light of recent events, Benn's speech has resurfaced on social media and his message is just as relevant as ever.

In light of the recent events about Iran and Iraq, there is no one better to turn to than Tony Benn.

“...What fools we are to think War is just an interesting channel 4 news item”

Former Tory MP Ken Clarke echoed Benn's words, in an equally provocative speech which gave prior to the 2003 invasion of Iraq.

He warned that a war would only create more terrorists and destabilise even more countries. Sage words which are depressingly still needed today.