How strong is Iran's military?

Iran has vowed to retaliate after its most powerful military commander was killed by a US drone strike at Baghdad airport.

So what do we know about Iran's military capabilities?

How big is Iran's army?
There are an estimated 523,000 active Iranian personnel in a range of military roles, according to the International Institute for Strategic Studies, a UK-based think tank.

There are a further 20,000 service personnel in the IRGC's naval forces. This group operates a number of armed patrol boats in the Strait of Hormuz, the site of several confrontations involving foreign-flagged tankers in 2019.

The IRGC also controls the Basij unit, a volunteer force which has helped suppress internal dissent. This unit can potentially mobilise many hundreds of thousands of personnel.

The IRGC was set up 40 years ago to defend the Islamic system in Iran and has become a major military, political and economic force in its own right.

Despite having fewer troops than the regular army, it is considered the most authoritative military force in Iran.

What about operations abroad?
The Quds Force, which was led by General Soleimani, conducts secret operations abroad for the IRGC and reports directly to the Supreme Leader of Iran, Ayatollah Ali Khamenei. It's believed to be about 5,000 strong.

The unit has been deployed to Syria, where it advised military elements loyal to Syrian President Bashar al-Assad and armed Shia militias fighting with them. In Iraq, it has supported a Shia-dominated paramilitary force which assisted in the defeat of the Islamic State group.

However, the US says the Quds force has a wider role by providing funding, training, weapons and equipment to organisations that Washington has designated as terrorist groups in the Middle East. These include Lebanon's Hezbollah movement and the Palestinian Islamic Jihad.

Economic problems and sanctions have hampered Iran's arms imports, which are relatively small compared to those of other countries in the region.

The value of Iran's defence imports between 2009 and 2018 was equivalent to just 3.5% of Saudi Arabia's imports over the same period, according to the Stockholm International Peace Research Institute.

Most Iranian imports come from Russia, and the rest from China.

Does Iran have missiles?
Yes - Iran's missile capabilities are a key part of its military prowess, given its relative lack of air power compared with rivals such as Israel and Saudi Arabia.

A US Defense Department report describes the country's missile forces as the largest in the Middle East, comprising mainly short-range and medium-range missiles. It also says Iran is testing space technology to allow it to develop inter-continental missiles, which can travel much further.

However, the long-range missile programme was stalled by Iran as part of its 2015 nuclear deal with foreign countries, according to the Royal United Services Institute (Rusi) think tank. But it added that it may have resumed, given the uncertainty surrounding that deal.

In any case, many targets in Saudi Arabia and the Gulf would be within range of Iran's current short and medium-range missiles, and possibly targets in Israel.
In May last year, the US deployed a Patriot anti-missile defence system to the Middle East as tensions with Iran increased. This is meant to counter ballistic missiles, cruise missiles and advanced aircraft.

What are its non-conventional weapons?
Despite years of sanctions, Iran has also been able to develop drone capabilities.

In Iraq, Iranian drones have been used since 2016 in the fight against IS. Iran has also entered Israeli airspace with armed drones operated from bases in Syria, according to Rusi. 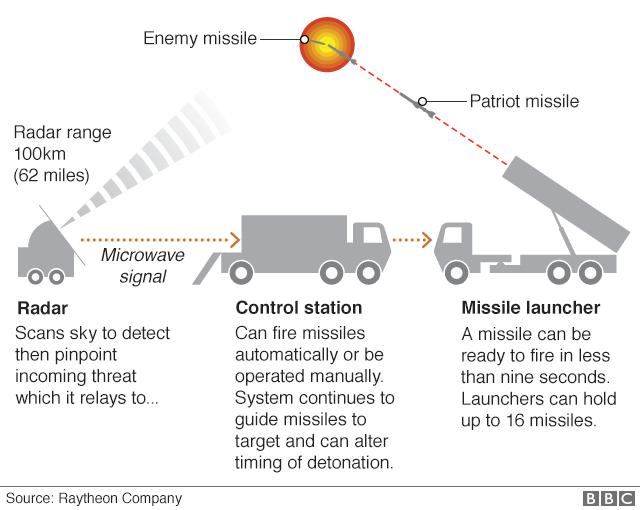 In June 2019, Iran shot down a US surveillance drone, claiming it had violated Iranian airspace over the Strait of Hormuz.

The other aspect of Iran's drone programme is its willingness to sell or transfer its drone technology to its allies and proxies in the region, says Jonathan Marcus, the BBC's Defence and diplomatic correspondent.

In 2019, drone and missile attacks damaged two key Saudi oil facilities. Both the US and Saudi Arabia linked these attacks to Iran, although Tehran denied any involvement and pointed to a claim of responsibility by rebels in Yemen.

Does Iran have cyber-capabilities?
Following a major cyber-attack in 2010 on Iranian nuclear facilities, Iran ramped up its cyber-space capability.

The Islamic Revolutionary Guards Corps (IRGC) is believed to have its own cyber-command, working on commercial and military espionage.

A US military report in 2019 said Iran has targeted aerospace companies, defence contractors, energy and natural resource companies and telecommunications firms for cyber-espionage operations around the world.

Also in 2019, Microsoft said a hacker group that "originates from Iran and is linked to the Iranian government" targeted a US presidential campaign and tried to break into the accounts of American government officials.