Confessions of a slaughterhouse worker

About 100 million animals are killed for meat in the UK every month - but very little is heard about the people doing the killing. Here, one former abattoir worker describes her job, and the effect it had on her mental health.

Warning: Some readers may find this story disturbing

When I was a child I dreamed of becoming a vet. I imagined myself playing with mischievous puppies, calming down frightened kittens, and - as I was a countryside kid - performing check-ups on the local farm animals if they felt under the weather.

It was a pretty idyllic life that I dreamt up for myself - but it's not quite how things worked out. Instead, I ended up working in a slaughterhouse.

I was there for six years and, far from spending my days making poorly cows feel better, I was in charge of ensuring about 250 of them were killed every day. 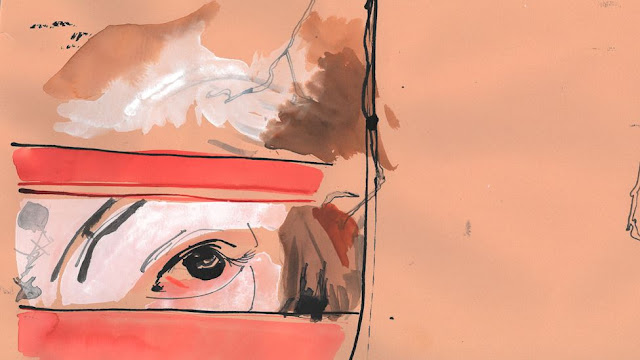 Whether they eat meat or not, most people in the UK have never been inside an abattoir - and for good reason. They are filthy, dirty places. There's animal faeces on the floor, you see and smell the guts, and the walls are covered in blood.

And the smell... It hits you like a wall when you first enter, and then hangs thick in the air around you. The odour of dying animals surrounds you like a vapour.

Why would anybody choose to visit, let alone work in a place like this?

For me, it was because I'd already spent a couple of decades working in the food industry - in ready-meal factories and the like. So when I got an offer from an abattoir to be a quality control manager, working directly with the slaughtermen, it felt like a fairly innocuous job move. I was in my 40s at the time.

On my first day, they gave me a tour of the premises, explained how everything worked and, most importantly, asked me pointedly and repeatedly if I was OK. It was quite common for people to faint during the tour, they explained, and the physical safety of visitors and new starters was very important to them. I was OK, I think. I felt sick, but I thought I'd get used to it.

Soon, though, I realised there was no point pretending that it was just another job. I'm sure not all abattoirs are the same but mine was a brutal, dangerous place to work. There were countless occasions when, despite following all of the procedures for stunning, slaughterers would get kicked by a massive, spasming cow as they hoisted it up to the machine for slaughter. Similarly, cows being brought in would get scared and panic, which was pretty terrifying for all of us too. You'll know if you've ever stood next to one that they are huge animals.

Personally, I didn't suffer physical injuries, but the place affected my mind.
As I spent day after day in that large, windowless box, my chest felt increasingly heavy and a grey fog descended over me. At night, my mind would taunt me with nightmares, replaying some of the horrors I'd witnessed throughout the day.

One skill that you master while working at an abattoir is disassociation. You learn to become numb to death and to suffering. Instead of thinking about cows as entire beings, you separate them into their saleable, edible body parts. It doesn't just make the job easier - it's necessary for survival.
There are things, though, that have the power to shatter the numbness. For me, it was the heads.

At the end of the slaughter line there was a huge skip, and it was filled with hundreds of cows' heads. Each one of them had been flayed, with all of the saleable flesh removed. But one thing was still attached - their eyeballs. 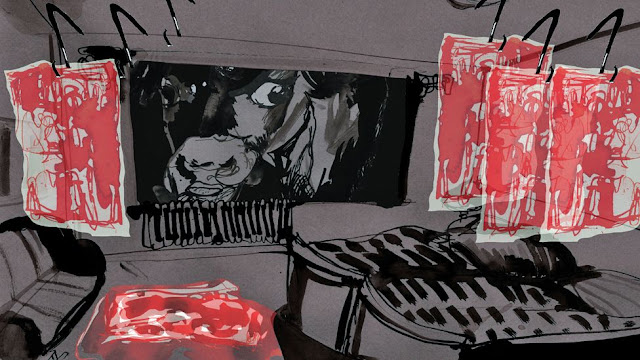 Whenever I walked past that skip, I couldn't help but feel like I had hundreds of pairs of eyes watching me. Some of them were accusing, knowing that I'd participated in their deaths. Others seemed to be pleading, as if there were some way I could go back in time and save them. It was disgusting, terrifying and heart-breaking, all at the same time. It made me feel guilty. The first time I saw those heads, it took all of my strength not to vomit.

I know things like this bothered the other workers, too. I'll never forget the day, after I'd been at the abattoir for a few months, when one of the lads cut into a freshly killed cow to gut her - and out fell the foetus of a calf. She was pregnant. He immediately started shouting and throwing his arms about.

I took him into a meeting room to calm him down - and all he could say was, "It's just not right, it's not right," over and over again. These were hard men, and they rarely showed any emotion. But I could see tears prickling his eyes.
Even worse than pregnant cows, though, were the young calves we sometimes had to kill.

A physically demanding role
On its website, the British Meat Processors Association (BMPA) says the UK meat industry has some of the highest standards of hygiene and welfare in the world.

Many of its members, it says, "are at the forefront of abattoir design with facilities designed to house the animals and help them move around the site with ease and without any pain, distress or suffering".

Meat processing in the UK employs about 75,000 people of whom approximately 69% are from other European Union member states, the BMPA notes.

"The barrier to British people taking up roles in meat processing is an unwillingness to work in what is perceived to be a challenging environment," it says. "Most people, while they eat meat, find it difficult to work in its production partly because of the obvious aversion to the slaughter process but also because it is a physically demanding role." 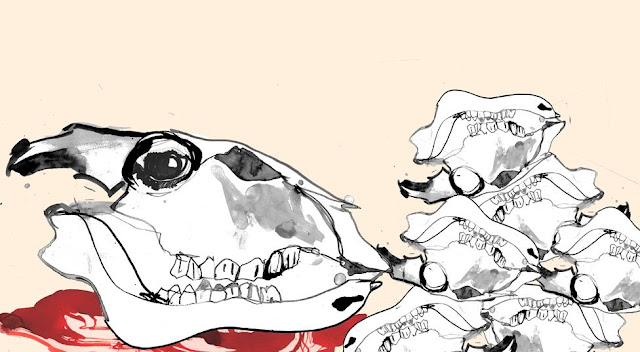 At the height of the BSE and bovine tuberculosis crises in the 1990s, whole herds of animals had to be slaughtered. I worked at the slaughterhouse after 2010, so well after the BSE crisis, but if an animal tested positive for TB or BSE they would still bring the entire herd in to be culled - bulls, heifers and calves. I remember one day in particular, when I'd been there for about a year or so, when we had to slaughter five calves at the same time.

We tried to keep them within the rails of the pens, but they were so small and bony that they could easily skip out and trot around, slightly wobbly on their newly born legs. They sniffed us, like puppies, because they were young and curious. Some of the boys and I stroked them, and they suckled our fingers.
When the time came to kill them, it was tough, both emotionally and physically. Slaughterhouses are designed for slaughtering really large animals, so the stun boxes are normally just about the right size to hold a cow that weighs about a tonne. When we put the first calf in, it only came about a quarter of a way up the box, if that. We put all five calves in at once. Then we killed them.

Afterwards, looking at the dead animals on the ground, the slaughterers were visibly upset.

I rarely saw them so vulnerable. Emotions in the abattoir tended to be bottled up. Nobody talked about their feelings; there was an overwhelming sense that you weren't allowed to show weakness. Plus, there were a lot of workers who wouldn't have been able to talk about their feelings to the rest of us even if they'd wanted to. Many were migrant workers, predominantly from Eastern Europe, whose English wasn't good enough for them to seek help if they were struggling.

A lot of the men I was working with were also moonlighting elsewhere - they'd finish their 10 or 11 hours at the abattoir before going on to another job - and exhaustion often took its toll. Some developed alcohol problems, often coming into work smelling strongly of drink. Others became addicted to energy drinks, and more than one had a heart attack. These drinks were then removed from the abattoir vending machines, but people would still bring them in from home and drink them secretly in their cars.

'I'm an animal lover'
A slaughterman at Tideford abbattoir, described his approach to his work, for The Food Chain on the BBC World Service:
"Basically, I'm an animal lover. I don't take any pleasure in what we're doing, but if I can do it as quietly and professionally as possible, then I think we've achieved something. Just be professional, do it, then switch off - and then, when we've finished work, go home and be a normal person. It's not for everybody. I know a couple of butchers that would not walk inside this abattoir; the thought of taking something's life, they find that difficult to accept, or witness."

Abattoir work has been linked to multiple mental health problems - one researcher uses the term "Perpetrator-Induced Traumatic Syndrome" to refer to symptoms of PTSD suffered by slaughterhouse workers. I personally suffered from depression, a condition exacerbated by the long hours, the relentless work, and being surrounded by death. After a while, I started feeling suicidal.

It's unclear whether slaughterhouse work causes these problems, or whether the job attracts people with pre-existing conditions. But either way, it's an incredibly isolating job, and it's hard to seek help. When I'd tell people what I did for work, I'd either be met with absolute revulsion, or a curious, jokey fascination. Either way, I could never open up to people about the effect it was having on me. Instead I sometimes joked along with them, telling gory tales about skinning a cow or handling its innards. But mostly I just kept quiet.

A few years into my time at the abattoir, a colleague started making flippant comments about "not being here in six months". Everyone would laugh it off.

He was a bit of a joker, so people assumed he was taking the mick, saying he'd have a new job or something. But it made me feel really uneasy. I took him into a side room and asked him what he meant, and he broke down. He admitted that he was plagued by suicidal thoughts, that he didn't feel like he could cope any more, and that he needed help - but he begged me not to tell our bosses. 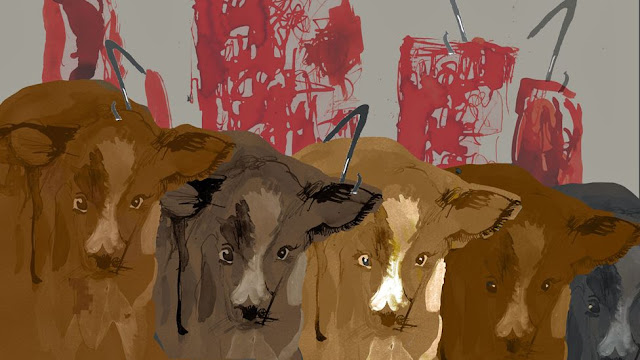 I was able to help him get treatment from his GP - and in helping him, I realised I needed to help myself too. I felt like the horrific things I was seeing had clouded my thinking, and I was in a full-blown state of depression. It felt like a big step, but I needed to get out of there.

After I left my job at the abattoir, things started looking brighter. I changed tack completely and began working with mental health charities, encouraging people to open up about their feelings and seek professional help - even if they don't think they need it, or feel like they don't deserve it.

A few months after leaving, I heard from one of my former colleagues. He told me that a man who'd worked with us, whose job was to flay the carcasses, had killed himself.

Sometimes I recall my days at the slaughterhouse. I think about my former colleagues working relentlessly, as though they were treading water in a vast ocean, with dry land completely out of sight. I remember my colleagues who didn't survive.

And at night, when I close my eyes and try to sleep, I still sometimes see hundreds of pairs of eyeballs staring back at me.