Kababs, kulfis, qormas: Forgotten recipes from Shah Jahan’s kitchens get a second life in this book

‘The Mughal Feast’ by Salma Yusuf Husain recreates the Persian recipe book ‘Nuskha-e-Shahjahani’, providing a glimpse into a bygone era of pomp and show.

The silver twilight of Mughal civilization began with Shah Jahan. Delhi was now a sanctuary of an urbane, sophisticated court which had taste, even elegance. By early 1730 the city had absorbed various elements from neighbouring regions and witnessed a mingling of international as well as national strains and an interchange of ideas, customs and food.

The Portuguese relationship with the Mughals had already been established a long time back, along the trade routes. Hence the imperial kitchens, besides Indian ingredients, saw an additional ingredient brought by the Portuguese – the chilli. The chilli was very similar to the long pepper, already in use, and therefore did not look too unfamiliar to royal chefs, but had the hot taste. Other vegetables like potatoes and tomatoes also appeared on the scene and the food of the Red Fort became rich in colour, hot in taste, and varied as compared to the bland food of its ancestors. Qormas and qaliyas, pulaos and kababs, and vegetables in different garb, besides European cakes and puddings, adorned the table.
Cooking and serving food in the royal kitchens was a riot of colours, fragrances, experiments, table manners and protocols. The emperors usually ate with their queens and concubines, except on festive occasions, when they dined with nobles and courtiers. Daily meals were usually served by eunuchs, but an elaborate chain of command accompanied the food to the table. The hakim (royal physician) planned the menu, making sure to include medicinally beneficial ingredients. For instance, each grain of rice for the pulao was coated with silver warq, which aided digestion and acted as an aphrodisiac. One account records a Mughal banquet given by Asaf Khan, the emperor’s wazir, during Jahangir’s time to Shah Jahan – though no outsider had ever seen any emperor while dining except once when Friar Sebastian Manriquea, a Portuguese priest, was smuggled by an eunuch inside the harem to watch Shah Jahan eat his food with Asaf Khan.

Once the menu was decided, an elaborate kitchen staff – numbering at least a few hundred – swung into action. Since a large number of dishes were served at each meal, an assembly line of staff undertook the chopping and cleaning, the washing and grinding. Food was cooked in rainwater mixed with water brought in from the Ganges for the best possible taste. Not only the cooking but the way the food was served is interesting to note – food was served in dishes made of gold and silver studded with precious stones, and of jade, as it detected poison. The food was eaten on the floor; sheets of leather covered with white calico protected the expensive carpets. This was called dastarkhwan. It was customary for the emperor to set aside a portion of food for the poor before eating. The emperor began and ended his meal with prayers; the banquet ran for hours as Shah Jahan liked to enjoy his food, spending long hours at dastarkhwan.

With the passage of time, indigenization in the cooking style became obvious and certain Indian ingredients, like Kashmiri vadi, sandalwood powder, suhaga, betel leaves, white gourd, and batasha, and fruits like mango, phalsa, banana, etc., were used to give different flavours to dishes.

The arrival of every dish was a ceremony and history will never forget the pomp of those times, along with the flavours which remain only in the pages of handwritten manuscripts of those days, such as Nuskha-e-Shahjahani. Not only the imperial kitchens of the emperor, but also the bazaars of the city were charged with the smoke of different kababs, and the environment was filled with the fragrance of nahari, haleem, qormas and qaliyas. The array of breads was dazzling. Festive occasions were never complete without baqarkhani, kulchas and sheermals. Sharbat ke katore and kulfi ke matke added colour to the scenario. The city of Shah Jahan was a paradise of food with the creations of local and foreign chefs.

This luxurious way of serving and preparing food continued only till the time Shah Jahan ruled, as his son Aurangzeb did not believe in luxury, pomp and show. Unfortunately, the last years of this great emperor were unhappy. Deposed by his son Aurangzeb, Shah Jahan was imprisoned in Agra Fort and remained there for eight years until his death in 1666. Legend has it that Aurangzeb ordered that his father be allowed only one ingredient of his choice, and Shah Jahan chose chickpeas. He chose them because they can be cooked in many different ways. Even today, one of the signature dishes of North Indian cuisine is Shahjahani dal, chickpeas cooked in a rich gravy of cream.

METHOD
1. Heat 100 gm ghee in a pan; sauté the onions and lamb with 2 tbsp water. Add the salt, pounded coriander seeds and grated ginger; cook, on medium heat, until the lamb is tender.
2. Add the beetroots, turnips, carrots and green gram with enough water to cover; cook the vegetables on low heat.
3. When the vegetables and lamb are fully cooked and at least 1 cup water remains in the pan, remove the pan from the heat and separate the lamb pieces and vegetables from the stock.
4. Temper the stock with the remaining ghee. Return the vegetables and lamb to the stock and bring to a boil. Add the rice paste and mix well.
5. Add the freshly ground spices and mix.
6. Transfer into a serving dish and serve garnished with saffron.

METHOD
1. Peel the oranges carefully so that the case remains intact. Remove the segments and keep aside. Sprinkle salt inside the case and float them in whisked yoghurt for an hour. Remove the cases from the yoghurt and wash with cold water. Boil the orange cases for a minute. Remove and keep aside.
2. In another pan filled with water, squeeze the juice of one lemon and boil the orange cases again. In case lemon is not available, boil in thin yoghurt liquid, simmer to make them tender.
3. Make yakhni with the lamb pieces and all the ingredients mentioned. Temper the stock with cloves.
4. Parboil the rice and keep aside.
5. Prepare a sugar syrup of one-string consistency; keep aside.
6. Remove the seeds and the skin of each segment and coarsely chop and mix with the yakhni. Take 1 tbsp cooked rice and mix it with saffron. Cook on low heat and simmer for 5 minutes. Remove and keep aside.
7. In a separate pan, spread the yakhni, evenly pour 3 tbsp syrup and simmer, when the syrup is absorbed, spread the rice and pour some ghee. Cover the pan and put on dum. While serving, transfer the pulao into a serving dish and place the orange cases over it. Fill one case with almond halwa, another with pistachio halwa, another with saffron and orange rice and another with salted minced lamb*. Garnish all with dry fruits and chopped coriander.

*You can buy almond halwa, pistachio halwa and salted minced lamb at a grocery store, or make them separately. You can also choose your fillings as per your liking.

METHOD
1. Prick the chicken all over with a fork.
2. Marinate the chicken with onion juice, ginger juice and salt; rub well inside and outside the chicken and keep aside for 30 minutes.
3. Heat the oil in a pan; add the minced meat, onion, crushed coriander seeds, chopped ginger and salt. Stir and cook until the meat is tender.
4. Smoke the cooked mixture.
5. Fill the chicken with the minced lamb and tie both legs with twine to keep the shape of the chicken intact.
6. Mix the saffron and ground spices with the yoghurt.
7. Apply the yoghurt and saffron mixture all over the chickens evenly.
8. Spread the cinnamon sticks on the bottom of the pan. Place the chicken on the cinnamon bed and pour the ghee around.
9. Make a semi-hard dough of black gram flour. Cover the pan and seal with this dough.
10. Place the pan on low charcoal heat and cook on dum for 4 hours.
11. Remove the cover, take the chicken out, cut into four pieces and serve over the mince.

METHOD
1. Boil the lentil until soft. Remove from heat and drain. Fry the lentil in little ghee with ginger and salt. Then add enough water to cook the lentil, ensuring that it is not mashed and each grain looks separate. Sprinkle the ground spices and smoke the mixture.
2. Knead the flour into a hard dough (in summer one part ghee and two parts kid fat is used while in winter the proportions should be equal).
3. Divide the dough equally into small portions. Roll each portion out into a thin poori, apply ghee and dust with dry flour, sprinkle the lentil mixture lightly and cover with another poori. Repeat the process with 5-7 pooris.
4. Shape them into squares and secure the edges with water.
5. Heat the ghee in a pan; deep-fry the squares. Remove and keep aside to cool.
6. Make a sugar syrup and soak the fried squares in it. When the syrup is absorbed, sprinkle pounded pistachios. 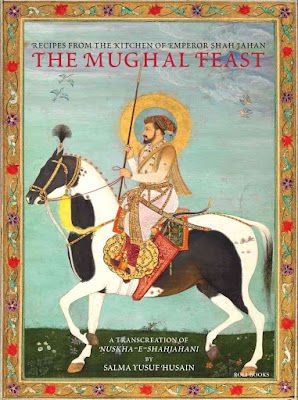