The 47-year-old attended functions for three weddings, went to a funeral and a cradle ceremony, visited a nursing home, prayed at a mosque and did much more.

For the past one week, the 76-year-old Chief Minister has remained solemn but upbeat in his daily press meets, displaying confidence in his government's ability to check the spread of the novel coronavirus in Kerala. With diligent screenings, follow-ups, home quarantine and isolation, Kerala had so far managed to prevent the rapid spread of the virus in the state.

However, one patient, a 47-year-old man has potentially exposed scores to the virus, posing a huge challenge for the Kerala government.

From March 11 to 17, the ‘businessman and social activist’, who returned from Dubai, has reportedly been to three districts and attended multiple functions, failing to quarantine himself despite exhibiting symptoms.

On March 17, the individual tested positive for the virus SARS-CoV-2 and shifted to the isolation ward of the Government General Hospital in Kasaragod. However, the district faces a total lockdown, even as authorities scramble to trace the hundreds of people who had come into contact with the infected man in the interim. 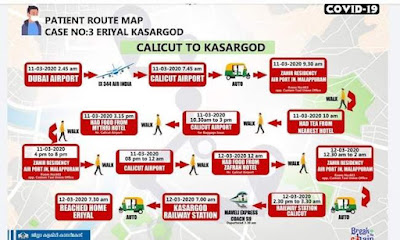 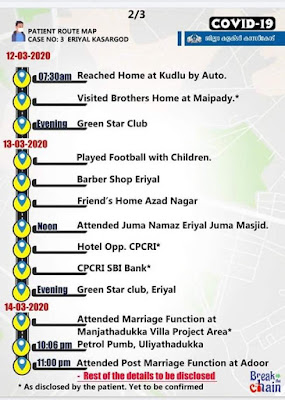 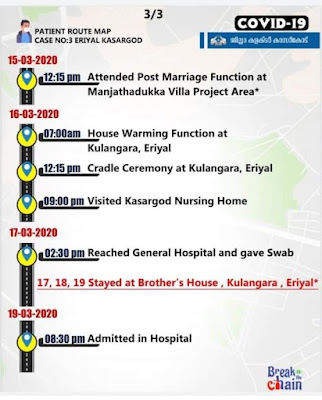 3 districts and multiple functions
A native of Eriyal with business interests in Dubai, the 47-year-old is the third patient to be tested positive for the virus in Kasaragod.

On March 11, he landed in the Karipur International Airport in Malappuram on the IX 344 Air India Express flight and stayed the night at a hotel in the area. It is unclear why he did not go home for an entire day, but the police are investigating this.

The man took the Maveli Express from Kozhikode to Kasaragod town on March 12. He was a passenger in the S 9 coach.

It was only on March 13 that Kerala issued an official order asking those returning from Gulf countries to be in home quarantine. The Central government issued the same advisory only five days later on March 18. However, with a Kerala family from Italy testing positive on March 10 and the deluge of news reports about passengers from different countries testing positive across the country, it’s difficult to imagine that the man in question was unaware of the dangers he was subjecting others to.

The 47-year-old attended functions for three weddings, went to a funeral and a cradle ceremony, visited a nursing home, prayed at the local mosque, played football matches with kids and visited local clubs to play board games in his hometown, where he closely interacted with scores of people.
At least 1,400 people in Kasaragod and Kannur are now said to have come in contact with the patient as per initial estimates. And this number is only set to increase, say officials.

An Indian Union Muslim League (IUML) supporter with local clout, the patient also frequented the party offices in the locality. In the five days prior to his isolation, he even met IUML MLAs NA Nellikunnu of Kasaragod and MC Kamarudheen of Manjeshwar. Both leaders have now been placed under home quarantine but remain asymptomatic.

"The first wedding the patient attended was that of his niece. Kasaragod MLA Nellikunnu had gone to the wedding house in the afternoon, when it was less crowded. He was greeted by the patient himself. There is even a photograph of the MLA and the patient shaking hands. He personally hugged and welcomed many of the guests at the wedding," a local source from Kasaragod told TNM.

MLA MC Kamarudheen had come into contact with the patient when he halted the leader’s car on the highway and requested for a photograph with him. He clicked the photo with the MLA seated inside the car.

"The 47-year-old had even attended a funeral in Kannur's Thaliparamba. 20 people are now considered his primary contact in the function. But it will be more," a local police officer confirmed. This detail, however, has not been published in the route map yet.

Navas, a member at Greenstar Arts and Sports Club where the patient was a regular visitor, told TNM that he had visited the club for five days in the evenings to play carrom. "He was very active in the social circle of Eriyal. When he’d come to the club, at least 10 to 15 people would have been there.

Every evening, he used to visit the club. We also know that he had gone to watch a football tournament, which is not in Eriyal," he said.

Besides putting several people at risk, what is irking the administration is that the man was unwilling to disclose all his movements, thereby delaying the publishing of the route map by many hours.

Speaking to local media, a visibly annoyed District Collector Satish Babu said, "We are struggling to track his details. He hides many of the details. So we cannot publish the route map until he reveals correct details. It is an individual’s responsibility to report to a hospital if you have symptoms. We had alerted that people from abroad should report to hospitals. But a few people don't follow our instructions. We will take strict action against such people."

The route map was finally published on Saturday afternoon and was three pages long.

Kasaragod in lock down
With seven fresh cases reported from the district, a total of 580 people have been placed under observation in Kasaragod, out of which 567 persons are under home quarantine while 13 are admitted to hospitals in the district, as on Friday, March 20.

Samples of 63 persons who are primary contacts of the patient have now been sent for testing.

The district now faces a total lock down with clubs, cinema halls, temples, mosques, churches and other religious establishments shutting down. Shops have been allowed to function from 11 am to 5 pm and residents have been banned from visiting parks and beaches for the next two weeks. Private and government offices have also been shut down for a week.

A patient’s identity is not revealed by the government for privacy reasons. Some patients choose to make a public declaration of their health status.