Cheetah sees photographer napping under a tree, decides to join in

We are all fascinated by photos of wildlife, and every single chance we get to peek into their kingdom is more than welcome.

Being free to roam the incredible landscapes makes these spectacular animals even more exhilarating. They are spontaneous, struggling, and sentient. Wildlife is often the symbol of cleverness, agility, strength, beauty, and grace. 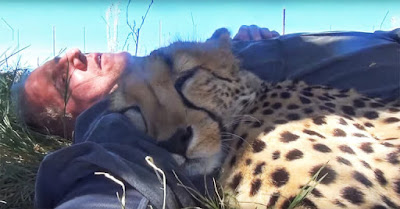 Can a photographer ask for more?

Dolph Volker works as a volunteer at the Cheetah Experience in South Africa. The non-profit is the home of endangered and threatened species, including cheetahs, leopards, male non-breeding lions, servals, caracals, African wildcats, wolves, meerkats, and a Siberian tiger.

After his beloved dog died in his arms, this wildlife photographer and zoologist was overwhelmed with feelings of deep sorrow. The event completely changed his life, and he decided to do his best to fight for animal rights and raise awareness for endangered species. 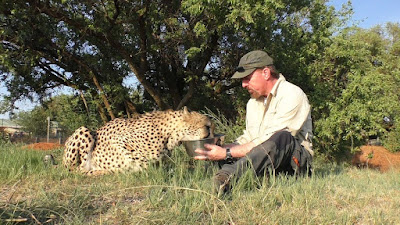 He would often use up his vacation days and savings to volunteer at the Cheetah Experience.

Cheetahs can be very shy, so he works for months to gain their confidence. However, his dedicated work eventually paid off.

Being tired after a long day in the sun, Dolph decided to take a nap under a tree. Then, a cheetah named Eden saw him, walked up to him,  sniffed him, and decided to cuddle with him!

When Dolph opened his eyes, he was speechless!

Yet, this was just the beginning of one great friendship, and Eden sees Dolph as belonging to her species. She cuddles him, nibbles him, purrs and snuggles with him.

Dolph now spends most of his time in the company of cheetahs, and is even known as “The Cheetah Whisperer.”

Make sure you check out the video below to learn more about this adorable friendship. You will be fascinated by the special bond the two have developed: