Amid pandemic, strays find it hard to fend for food

The Animal Welfare Board of India (AWBI) released an advisory addressed to all municipal corporations asking them to ensure that animals and birds do not suffer due to hunger amid the lock-down.

A number of stray cats and dogs rely on leftovers provided by hoteliers, local restaurants daily markets and helpful people. However, with the complete lockdown of most establishments and people staying at home, there is no means for the animals to feed themselves. Moreover, if the lockdown is prolonged, there is a chance of them starving due to lack of food. A lot of the strays depend on animal welfare workers, regular feeders and volunteers for their food and it becomes more challenging to step out with the curfew in place to combat the pandemic.

The Animal Welfare Board of India (AWBI) released an advisory addressed to all municipal corporations asking them to ensure that animals and birds do not suffer due to hunger amid the lock-down. If they die, the carcasses of dead animals and birds may further spread different diseases which will exacerbate the situation. “The feed and fodder for large animals and food for companion and stray animals is an essential service and should be operational during lockdowns. The district administration may, if need be, allot specific time during morning and evening hours for individuals or volunteers to provide food and water for street animals and birds,” said Dr O P Chaudhary in the advisory. 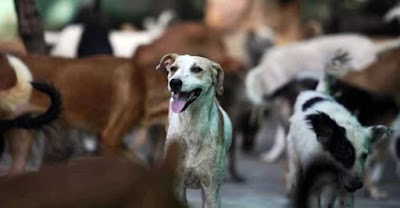 A similar request was also issued by BJP leader and former Women and Child Development Minister Maneka Gandhi on Monday, where she said animals can neither transmit nor get coronavirus. She urged all animal welfare workers to continue to feed animals during this period. The Karma Foundation, an animal welfare NGO in Pune with Royal Canin India, has started a drive to feed stray cats and dogs amid the pandemic. “We have been associated with Royal Canin for a while now. Viewing the situation, we decided feed the strays and they provided us with the food stock. Our volunteers in each area are provided with the food. The COVID-19 created panic among people, especially in relation to animals. I do not know whether this is due to the pandemic or not, but we had about eight pets abandoned, four to five cases of poisoning and some cases of cruelty since the coronavirus entered the city. This is nothing but misinformation,” said Aditya Makharia, vice president of Karma Foundation.

Meanwhile, Govind Suryawanshi, corporate affairs director of Royal Canin India, said while Pune is the pilot project for the drive, they are planning to extend the drive to other cities as well. “It is for a noble cause. We are aligning ourselves with genuine NGOs in various cities hit by the COVID-19. Mumbai and neighbouring areas are in the books. We will also try to make it work outside the state as well,” he said.
On the ground level, several regular feeders expressed that while they are still feeding their strays, they are taking additional precautions to keep themselves safe as well.

The small community of feeders are dividing their areas in small pockets that can be attended to by a number of volunteers. “I have been feeding strays in my area for the last eight years. The situation is bad but we cannot overlook the need of animals as a lot of them rely on feeders. The number of strays has increased during the lockdown as many roam here and there to look for food. These animals are territorial and the circumstances provoke many to cross boundaries for food but they end up in fights. People can just put out two chappatis and a bowl of water for the animals and birds so that they do not suffer in this period,” said Prachi Sharma, travel agent and animal activist.

Sanaya George (27), a human resource executive, said not only do the animals need food but many also need medical attention. “In my area, there are several lactating mothers who need food. There are many who get wounded or catch infection. With the lockdown, we have coordinated with police authorities to let us feed and tend to them at least in our areas. We also leave food and water where we suspect animals to come, as they are scavengers and can find the food but water is a necessity considering the rising temperature,” she said.

Central govt urges veterinarians to work as usual
With veterinary services not included in the list of essential services, the Ministry of Fisheries, Animal Husbandry and Dairying in an official letter by the joint secretary, Upamanyu Basu, on Monday said veterinary hospitals, dispensaries, private clinics, veterinary pathologies and animal shelters should function as per usual. It has also urged veterinarians and other related officials to maintain personal hygiene and avoid large gatherings.

(Source: The Indian Express)
Posted by Arjunpuri at 11:00